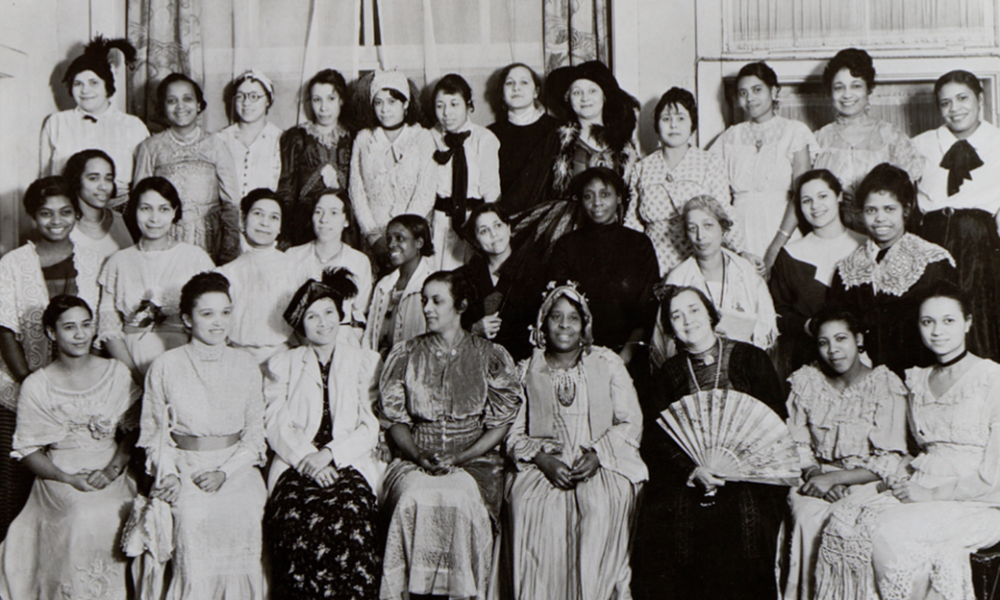 Establishing chapters out west and on the Pacific coast was a crucial goal for Black sororities and fraternities, especially as they sought to create organizations that were truly national in scope. According to a report on the growth of Black Greek life published in 1923, the collective membership of Black Greek letter organizations was nearly 10,000, with over 150 chapters across the United States. Furthermore, the report read, “the potency and importance of college [fraternal] organizations in college life is to be noted from the wide territory which such organizations cover.”1 With all but two D9 organizations being founded on the East Coast, westward expansion demonstrated these organizations’ broad interest and increasingly growing capacity.

Clusters of Black college students out west mostly attended schools in California; this is evident in the number of early D9 chapters established in California. Alpha Phi Alpha was the first Black Greek letter organization, of men or women, to charter a chapter on the Pacific coast. The fraternity’s Alpha Delta chapter at the University of Southern California (USC) was established on February 2, 1921, with fifteen charter members.

Alpha would continue to add western chapters to its ranks within the next several months later. The Alpha Iota chapter was chartered at the University of Denver in 1922. In the fraternity’s quarterly publication, The Sphinx, the young chapter shared: “our aim is to push Alpha Iota to the foreground and let ‘fraterdom’ know that even as far West as Denver, we have a large spark of fraternity pride for our dear old Alpha Phi Alpha.”2

Kappa Alpha Psi and Omega Psi Phi fraternities chartered their first chapters on the west coast in 1923. Kappa established its Upsilon chapter in April 1923 at the University of California at Los Angeles (UCLA). The Upsilon chapter of Kappa Alpha Psi has scores of notable initiates; perhaps its most reverend was Thomas L. Bradley– the 18th Grand Polemarch of Kappa and the 38th Mayor of Los Angeles. Omega chartered its Lambda chapter in May 1923 at the University of Southern California (USC). The Lambda chapter of Omega Psi Phi remains highly lauded and is affectionately known as the “Pearl of the West Coast.”

Thomas Bradley was initiated into the Upsilon chapter of Kappa Alpha Psi on February 18, 1938. While in college, he served as chapter Polemarch (President). Bradley later joined the Los Angeles Alumni chapter, serving as Strategus (Sergeant-at-Arms). At the request of Kappa’s 13th Grand Polemarch Ernest J. Wilkins, Bradley served as the Western Province Polemarch in 1947, a position he held for nearly a decade. In 1964 he was elected as the fraternity’s 18th Grand Polemarch.

Delta Sigma Theta was the first Black sorority established in California and perhaps on the Pacific coast. In February 1921, the Kappa chapter of Delta was chartered at the University of California at Berkeley with five members. Vivian Osborne, a student in Berkeley’s graduate anthropology program, served as the chapter’s first president. A write-up on the chapter, appearing in the 1921 edition of The Delta, read: “the members of Kappa Chapter are prominent members in the society of the Bay Cities,” suggesting that for Black women deeply circumscribed by race and gender — the chapter’s members exhibited great social and intellectual prowess. Moreover, as Delta historian Paula Giddings noted, the entire chapter maintained a B average or higher– a requirement of the sorority.4

Several months later, Alpha Kappa Alpha chartered its Rho chapter at the University of California at Berkeley. The chapter’s first president Ida L. Jackson shared that in 1921 the sorority collected $45, equivalent to $750 in today’s money, to have their chapter portrait published in the university’s yearbook, The Blue and Gold. Unfortunately, the sorority’s portrait was omitted from the yearbook. When the sorority confronted the university president, David Barrows, about this evident display of racism, he replied that the newly established Black sorority was not “representative of the student body.” Much of campus life remained segregated, prompting members of the Rho chapter to meet and socialize in the home of Ida Jackson at 621 58th street in Oakland, California.5

While Phi Beta Sigma arrived in areas west of the Rocky Mountains in the late 1930s, the fraternity chartered its second chapter, Beta, at Wiley College in Marshall, Texas. The Beta chapter of Phi Beta Sigma is considered the birthplace of the Western Region. In 1910, the number of African Americans in California was under 25,000, and that figure was smaller in other western states like Washington, Idaho, and Colorado. However, by the 1920s, the Great Migration was underway; as people began migrating out of the South and into cities in the Midwest and along the Atlantic and Pacific coasts, African Americans’ conception of geography changed– illustrating the porosity of early D9 regions.

By the 1930s and 1940s, African American women began securing work in Hollywood. Hattie McDaniel and Louise Beavers were two pioneering Black actresses and members of Sigma Gamma Rho sorority. In 1934, Beavers received praise for her role as Delilah in Imitation of Life. Film scholar Charlene Regester wrote about Beavers’ performance as “the first time in American cinema history that a Black woman’s problems were given major emotional weight in a major Hollywood motion picture.” Five years later, Hattie McDaniel became the first African American to win an Academy Award for her performance in Gone with the Wind. In her acceptance speech, she said, “I sincerely hope I shall always be a credit to my race and to the motion picture industry.”

The Second World War moment witnessed an increase in the number of African Americans moving out of the South. A slowly eroding Jim Crow system, coupled with a spike in defense industries hiring African Americans, brought Black people and families to places on the west coast like Arizona and California. Between 1942 and 1945, 340,000 African Americans migrated to cities in California for work.

Among those migrating out of the South and Midwest was Alpha P. Arnold. A native of Virginia, Arnold a former social worker in Columbus, moved to Los Angeles in 1944 with her husband, Cornelius. She was employed as a teacher in the L.A. public school system. In 1947, she was elected president of Zeta’s Los Angeles’ graduate chapter. In 1963, she was elected to president of the L.A. branch of the National Council of Negro Women (NCNW). The following year, Arnold was appointed to the Nominating Committee of the L.A. branch of the NAACP.

During the 1920s, African American communities witnessed a resurgent interest in national organizing. The result of tens of thousands of African American veterans returning home to segregated and resource-deprived neighborhoods incited an eagerness to connect disparate regions into one unified body. So, westward expansion was pivotal in connecting Black communities in the Midwest and the Atlantic coast to those out west. By the mid century, after another sizable wave of westward migration, dozens of chapters of Black Greek Letter Organizations were established in Phoenix, Los Angeles, Oakland, Las Vegas and Seattle. And with members residing on the West coast several national body meetings of the D9 were held there.

About the Author: Marquis Taylor is a third-year history Ph.D. student at Northwestern University. His work specializes in late 19th and early 20th century African American history. In the spring of 2018, he was initiated into Alpha Phi Alpha’s Beta Chapter seated at Howard University.

If You’re ‘Infla-Dating,’ Here Are 10 Cheap Dates That Don’t Suck
This Is What Having An Incarcerated Mother Can Rob You Of
4 Arrested In Alleged Rape Of LSU Student Who Was Later Fatally Struck By Car
Rep. Ritchie Torres Calls For FEC Investigation Of George Santos As More Wild Stories Emerge
Sometimes, Non-Black Critics Shouldn’t Critique Black Media