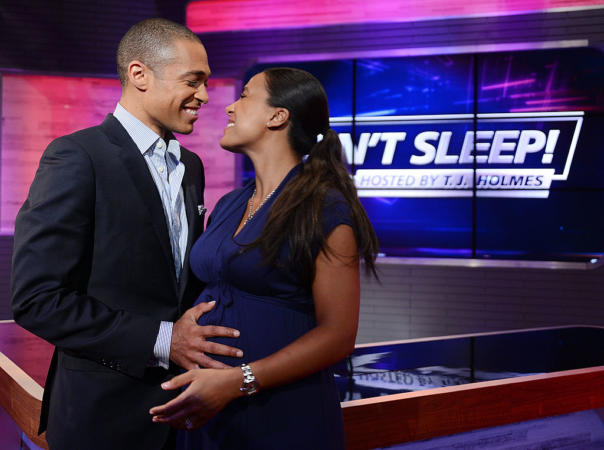 In the wake of his affair with co-anchor Amy Robach becoming public, T.J. Holmes’ estranged wife made a statement one week after Holmes filed for divorce.

Lehman released an exclusive statement to the Daily Mail, which states, “During the holiday season and in light of the challenging times, Marilee’s sole focus has remained on the overall best interest of her 9-year-old daughter.”

The attorney added she and Holmes’ lawyer “have been working together to move their divorce forward privately, expeditiously and as amicably as possible.”

“Notwithstanding, we continue to be disappointed by T.J.’s lack of discretion, respect, and sensitivity toward Marilee and the party’s daughter.”

Lehman ended her statement by saying her 45-year-old client appreciated the public’s support. “Marilee has been touched by the outpouring of support and looks forward to a new beginning in this new year.”

Fiebig is an immigration lawyer and serves as the chief diversity officer for the Save the Children Foundation.

She is a native of the Democratic Republic of Congo. The Daily Mail states that her past employment includes vice president of operations and general counsel at Wilhelmina modeling agency. She was also the chief of staff at Roc Nation.

Their 13-year marriage began in March 2010, and they share a 9-year-old daughter, Sabine. Fiebig is his second wife.

Grammys Host Trevor Noah Previews The 2023 Awards, Talks Dance Lessons With Cardi B And This Harry Styles Interaction
Inside The Online Community Where Home-Schoolers Learn How To Turn Their Kids Into ‘Wonderful Nazis’
Reminder: You Don’t Have To Watch The Brutal Video Showing Tyre Nichols’ Beating That Led To His Death
Oprah Parties With Kim Kardashian, J. Lo And More While Celebrating 69th Birthday
Phi Beta Sigma’s Ran Carthon Named General Manager of The Tennessee Titans