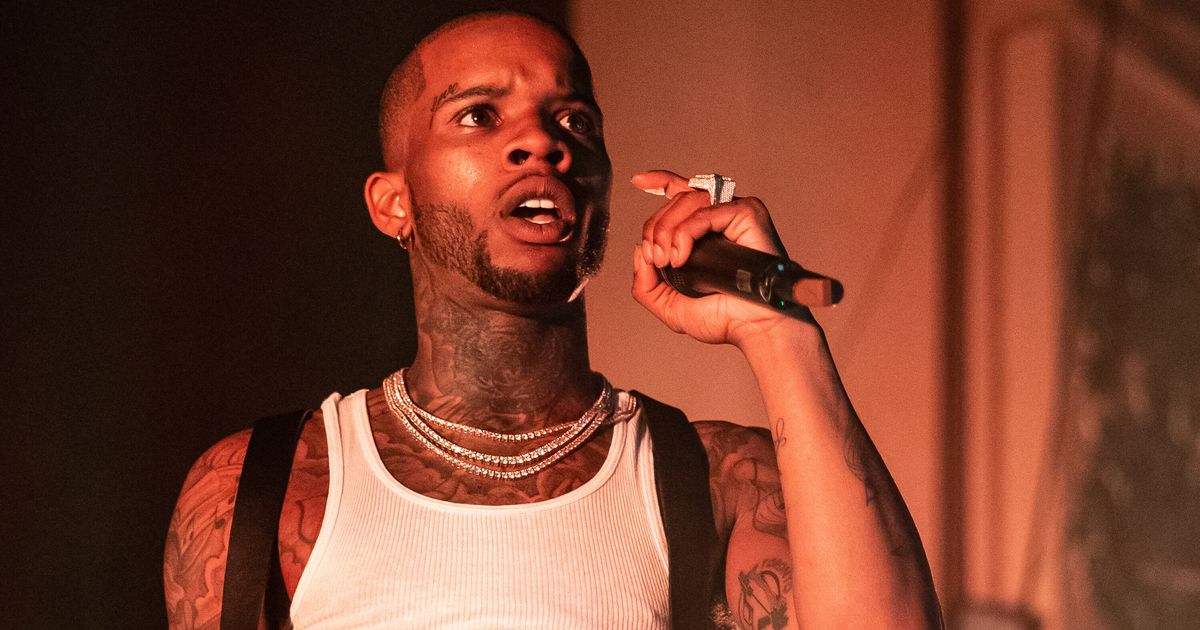 Chris Rock hilariously, if simplistically, summed up the perceived social edict on manhood: We’re valued primarily by the provisions we bring to the table. Financial sustainability, sexual prowess, viability as a Spades card game partner… we all harbor some degree of insecurity in our ability to perform.

Blame the patriarchy, if you will, but no man I know makes it to or through adulthood without some degree of pressure to be, well, a man. Anyone who suggests otherwise is lying — a form of insecurity itself.

But there’s a difference between having insecurities — as does every human with a pulse — and being an insecure human being. Unfortunately, men like Daystar “Tory Lanez” Peterson fit the latter bill, wearing their all-consuming insecurity like a pleather trench coat on a humid summer day.

Often, when insecurity and fragility permeate every fiber of a man’s being, it manifests itself in relatively benign behavior, like anonymously arguing with strangers in a comments section or contributing money to Candace Owens. But, in Lanez’s case, someone got shot.

“(Megan) disrespected his rapping. She’s insulting him as a rapper, and that pissed him off,” Ta said. “He had a massive ego, and he could not handle being disrespected. And how dare she have the audacity to walk away from him. So he reasserted his dominance. He was going to show her.”

It would appear that the proverbial smoking gun, which many believe sealed his conviction, was a just-released call between Lanez and Megan’s former friend Kelsey Harris, just a few hours after the Houston rapper was shot. His quotes are loaded with profanity, but let’s just say that you’d have to have attended the Jussie Smollett Academy of Quantum Leaps to hear it and still believe Lanez isn’t guilty.

You could’ve passively followed this case, as I did, and still witnessed Lanez’s wee baby energy sprinkled all over it, especially with the 2020 release of his ”DAYSTAR″ album. It at once attempted to profit from the shooting and absolve him of it. Fortunately, many music critics saw right through the desperate musical effort.

Let’s say that you, along with your former high-school classmate who went full-tilt Black Hebrew Israelite in his 20s and all the vloggers who’ve apparently been hiding their forensic science degree this whole time, started caring about Lanez out of nowhere and are still convinced that, somehow, that bullet willed itself into Megan’s foot. Try to excuse that nice thread over on Twitter with several examples of Lanez behaving like a violent little man.

Speaking of the big Smurf in the room: Lanez is, according to his arrest report, 5-foot-3. This makes him about 9 inches shorter than Meg and a likely prime candidate for lying on his online dating profile. He’s like every angry, diminutive dude you remember from school, except he managed to build a career creating bops instead of going on to get his “life revenge” on employees as a middle manager somewhere.

Indeed, it would appear that money, fame and success don’t do much to mitigate the issues of truly fragile men (see: every time DJ Akademiks gets caught on video). Lanez’s music is unlikely ever to be entered into the Library of Congress, but his career is not insignificant — he’s made Billboard Top 10 as a guest on a Jack Harlow track, along with a few joints that squeaked into the Top 50. Unfortunately, most pop star aspirants will never achieve what he has.

Musical achievements aside, Lanez’s admonishments outside his talents have done enough to damage his career and send him to the pokey. He’s now put a permanent asterisk next to his accolades that will forever read, “here is the little man who shot a woman that bruised his ego.”

Andrew Tate is another recent example of a “successful” man whose elephantine ego put him in a bad way. Best described as the noxious lovechild of Kevin Samuels and Archie Bunker, Tate has made a living commodifying rank misogyny and becoming a patron saint to incels, to the degree that dude was bounced from most social media last year.

The 36-year-old decided to pick a Twitter fight with activist Greta Thunberg, who just stopped being a teenager on Wednesday. Tate’s tweet, in which he brags about his luxury cars and their emissions, reads like a 7-year-old running at full speed on the playground to impress a girl he likes. In what could be Twitter’s most liked clapback ever, Thunberg suggested that Tate should aspire to be a “motion in the ocean” type.

His ungodly ridiculous video response to that tweet, in which he receives pizza boxes that allegedly alerted Romanian law enforcement to his location and led to his arrest on charges of human trafficking, among other things, provides all the schadenfreude we needed to kick off a new year.

Perhaps the most egregious example I’ve seen of an unchecked fragile male ego is that of Kanye West, who now goes by Ye. We’re talking about a man considered by many to be one of hip-hop’s greatest and most influential creators; and the creator of a clothing brand that, at one point, had him rich enough to buy off Jesus. Yet he still managed to get into a public tiff with a dude 16 years his junior over dating his ex-wife. Then, when that wasn’t enough, Ye topped off his toxic behavior by spewing his antisemitic views on and off social media.

Ye’s “I never get the respect I deserve” bit was cute when he was on the come-up two decades ago, but the petulance rings tragically when you have more money and fame than 99% and a few decimal points of humans, and you’re still clawing for the imprimatur of rich, white conservatives who don’t give a damn about your Black ass.

The tragedy of it all is made even more Grecian in scope by all the folks (mostly men, but not always) who view the consequences these men receive for acting on behalf of their egos and still manage to make excuses for them.

“Everyone’s always trying to tear down a Black man!” “She shot herself!” “His mama died… his ain’t-rightness ain’t his fault!”

Yes, there’s a ton of context as to why much of this male fragility exists, especially in the Black community. Many of us came up in households and environments where we’re imbued with troubling ideas of “masculinity,” in which we’re told to solve problems with violence or negativity. Too many of us carry that into adulthood and take folks like Dr. Umar Johnson with his “alpha male” tomfoolery to heart.

I won’t pretend that the male ego is easy to check, even among the best of us. For example, my crew of best friends are all successful, formally-educated Black men with little left to prove to the world in our early 40s. But despite being emotionally self-aware and open with each other, there’s always this patina of macho male bullshit that creeps into our interactions, especially as a group.

But the thing about being a grown-ass man is the importance of taking accountability for one’s actions. Mental health and the “system” are no excuses for bad behavior. I believe therapy separates a man from his fragile ego and toxic behavior. We in the Black community are still coming around to therapy in general… especially the men. My septuagenarian Black dad from rural Louisiana was never about that therapy life, so it took me reaching my late 30s to get there.

My hope is that, as more Black Millennials birth and raise children, they will do so with less focus on antiquated modes of “masculinity,” creating fewer fragile male egos and healthier approaches to problem-solving. And I hope that, while Tory Lanez sits his dumb ass down for a few years, he can have sincere conversations with an objective professional and become a more humble, enlightened man willing to spread a new message to the masses.

Again, it’s not necessarily easy to check the male ego, but it’s never too late to try.

Megan Thee Stallion And The Price Of Pushing Past Trauma

Raven Symoné Says Fans Have Pronounced Her Name Wrong For Over 30 Years: ‘It’s ‘See-Mon-Ye Like Yay’
Jury Rejects Lawsuit Filed By Family Of Tyre King, Ohio Teen Killed By Cop
Sammie Speaks On Murder Charges Against His Mother
New Orleans Mayor Speaks Out After Being Accused Of Having An Affair With Police Officer
Octavia Spencer Says She Experienced More Racism In Los Angeles Than In The Deep South