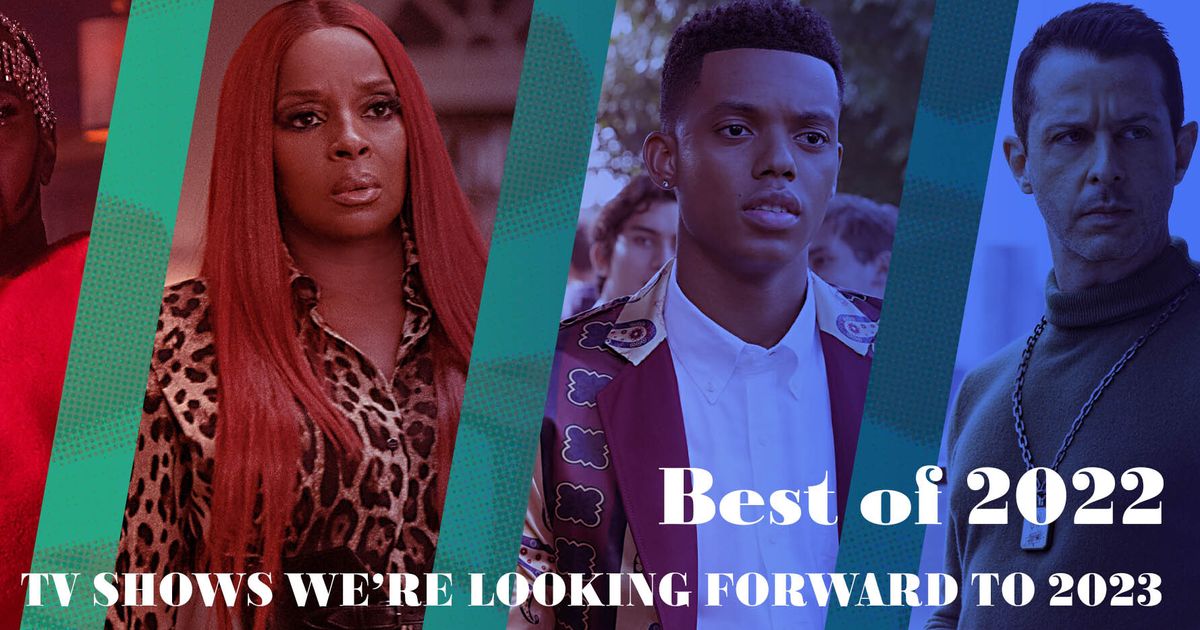 Chile. TV is about to be good next year. Or so we hope.

2022 gave us some hits and lots of misses as far as TV gems are concerned. And though news of cancellations and mergers have us a bit shook (farewell, “Love Life”), there are some series that promise a silver lining for 2023.

HuffPost’s culture team put our heads together and came up with a list worthy of a binge-watching weekend or lively group chat conversation. Some shows have hit their stride and earned their stripes, while others are still early in the game but just as addictive. There are a few newcomers that we have our eyes on, too.

Here’s to a year of TV worth watching. *clink clink*

Shows We Know And Love

There must be some HBO executive somewhere checking in with “Succession” creator Jesse Armstrong and imploring him to give us Season 4 ASAP. I have certainly been feeling that anticipation since the end credits rolled on that sensational Season 3 finale last December, and I picked my jaw up off the floor after realizing Tom (Matthew Macfadyen, who went on to win an extremely well-deserved Emmy) had betrayed his wife Shiv (Sarah Snook). What will happen to our favorite scheming rich white family next? Will the Roy siblings’ “rebel alliance” work? Or will it fail spectacularly, like every other time any of them has tried to escape the cycle of abuse from patriarch Logan (Brian Cox)? There are plenty of other big-picture questions we might see explored in the new season, premiering some time this spring, per HBO. But let’s be real: None of the specifics matter too much. As soon as that Nicholas Britell opening theme hits, and as soon as one of the characters unleashes the first of many deliciously cutting insults, we’re all in. All bangers, all the time. — Marina Fang

“Power Book II: Ghost” really came into its own in its second season. This scene alone, when queenpin Monet Tejada (Mary J. Blige) lunges at her daughter Diana (LaToya Tonodeo) after she reveals family secrets at the dinner table, still sits in the back of my brain as a real display of Blige’s acting chops. (Apparently she improvised the moment.) With two big deaths in Season 2 — and Tariq’s sister Yaz finally being reunited with their mother — here’s hoping we find out what Tariq and the crew are up to ASAP. — Erin Evans

Saying goodbye to a great show is often bittersweet. For the past three seasons, Mindy Kaling and Lang Fisher’s wonderful coming-of-age comedy “Never Have I Ever” has been a balm for my weary soul. It has created stars out of its young cast, led by Maitreyi Ramakrishnan as high-schooler Devi, and given veteran actors like Poorna Jagannathan and Sarayu Blue the kind of beautifully rich roles not often available to South Asian women in Hollywood. While it will be sad to bid farewell, it’s also nice when a show, especially one centering people of color, gets to go out on its own terms. In an interview, Jagannathan told me filming the final season was in part about her character ― Nalini, Devi’s mom ― “deliver[ing] Devi into adulthood as a more complete person.” For a show that has tenderly and thoughtfully explored personal growth, I have no doubt it’ll deliver Devi and Nalini, and all of us, a great ending. — Fang

“P-Valley” left us with one of the most beautiful moments of television in its Season 2 finale: Lil Murda (J. Alphonse Nicholson) and Uncle Clifford (Nicco Annan) slow-dancing to Jeffrey Osborne’s “Love Ballad.” I cannot rave enough about this cast, featuring incredible turns by Nicholson, Annan, Brandee Evans and other amazing actors. There’s so much to look forward to in the next season. I’m desperate for Keyshawn (Shannon Thornton) to get out of that abusive relationship, and so hopeful that Lil Murda and Uncle Clifford can find their version of happily ever after. Big Bone (Miracle Watts) got the side-eye from me the day she showed up and fell for Diamond (Tyler Lepley), and Roulette (Gail Bean) is dangerous and such an intriguing character. Here’s hoping that we get more mess — and more love — in the third season. — Evans

One of my criticisms of Season 5 of “The Crown” was that narratively, it felt a little thin, and like it was delaying the inevitable. We all know what’s about to happen! But understandably, creator Peter Morgan was saving a lot for the sixth and final season of the Netflix drama, which will cover the death of Princess Diana (Elizabeth Debicki) and the aftermath, and the British royal family assessing their relevance at the dawn of the new millennium. (The final season will also test whether this time, I will be able to suspend disbelief when watching Dominic West as Prince Charles.) Wherever you land on the show (including the often inane debates over its loose historical accuracy), there’s no question that it’s a treat to watch, with its sumptuous sets and costumes and its anthology-style rotating cast, each set of actors bringing their own take on the royals. And amid renewed real-life questions about the royal family being woefully behind the times, the final season of “The Crown” will surely give us lots to discuss. — Fang

We on the HuffPost culture desk are on record as saying this show, HBO Max’s much-discussed revival of “Sex and the City,” was probably unnecessary. And yet, we could not stop talking about it. That’s the conundrum with Season 2 of “And Just Like That”: No, this did not need to be renewed for another season, but will I watch it (and then gossip about it)? Absolutely. However, if we’re going to do this again, the show ought to shift the narrative away from the original core characters, and give us more Sarita Choudhury! And please, make better wigs. — Fang

If there’s one thing Starz and 50 Cent know how to do, it’s tell the story of a drug-and-money-laundering syndicate and make it as entertaining as it is violent. That’s exactly what this show, loosely based on the true stories of brothers Demetrius (“Big Meech”) and Terry Flenory, is about. The siblings created the Black Mafia Family, popularly known as BMF, in 1980s Detroit. Season 1 established the gang’s early influence and redefined Loose Ends’ “You Can’t Stop the Rain” for audiences. In Season 2, we’ll be looking out as Meech continues to embark on the drug trade while Terry tries to go legit with his new car business. — Taryn Finley

Just one thing to say here: They better start eating people in the season opener. — Evans

This reimagined version of the beloved ’90s sitcom “The Fresh Prince of Bel-Air” was honestly a lot better than a lot of reboots that have come out of that era. The 10-episode first season did a really good job of using the troubled story of Philly-born basketball phenom Will Smith (Jabari Banks) as the centerpiece to build out Will’s new world with his family in Bel-Air, Los Angeles. Last season, we saw each character choose family, most notably Phil Banks (Adrian Holmes), who spent the season running for office only to drop out to support Vivian Banks (Cassandra Freeman) in her career. Next season should be interesting, as the teaser trailer suggests a major theme of each character leaning more into their own path. — Finley

In November, Netflix gave a series order to “Neon,” an eight-part comedy about three friends from a small town in Florida who move to Miami with hopes of making it big in reggaeton. Created by author and former educator Shea Serrano, the forthcoming series stars one of our “Insecure” and “Abbott Elementary” recurring faves, Courtney Taylor. I’m a general fan of Serrano’s work and online presence, but I’d be remiss not to mention that HuffPost Culture Shifter Katelina Eccleston consulted on the series alongside one of my former colleagues. As someone who enjoys the musical genre, I’m so looking forward to the amplification of reggaeton on screen. I’m hoping this Latino-led series, with a young, multiracial cast, will become a mainstay; fingers crossed we’ll be able to follow the careers of these (hopefully) breakout stars. ― Ruth Etiesit Samuel

Despite their growing popularity, witch narratives have not been very inspired lately. But if anyone could infuse texture, pathos and visceral fear in a story, it was the late Anne Rice. And after AMC gave us the actually great race-bent adaptation of “Interview with the Vampire” earlier this year, expectations are now through the roof for “Mayfair Witches.” The story follows a present-day neurosurgeon (Alexandra Daddario) who discovers (supernaturally, of course) that she comes from a long line of witches. Drama ensues. Here for it. — Candice Frederick

My husband ― er, I mean, Emmy Award-winning actor Yahya Abdul-Mateen II is set to star in “Wonder Man,” Marvel’s upcoming series for Disney+. Abdul-Mateen is no stranger to playing comic book characters; he portrayed Black Manta in “Aquaman” and Doctor Manhattan on HBO’s “Watchmen.” I’m not a huge fan of comics, so I’m not quite up to speed with the adventures of Simon Williams, but thankfully Abdul-Mateen is intriguing enough to pull me right on in. — Evans

“Fight the Power: How Hip Hop Changed the World”

There’s been a lot of interest in the origin story of hip-hop lately, including A&E’s “Origins of Hip-Hop” docuseries earlier this year. And with the music genre’s 50th anniversary in 2023, you can probably expect a lot more discussion around this milestone. PBS’ “Fight the Power: How Hip Hop Changed the Word,” developed by rap pioneer Chuck D and his manager, Lorrie Boula, aims to comprehensively trace the music’s history, exploring how it has narrated and amplified what was going on in Black America from the 1970s to the present day. Including interviews with musicians and chroniclers alike, this sounds like a history lesson worth revisiting. — Frederick

This Year Reminded Us To Not Take Great TV For Granted

The 16 Best Podcasts We Listened To This Year

How TV Shows Tackled The End Of Roe v. Wade This Year — And What They Got Wrong