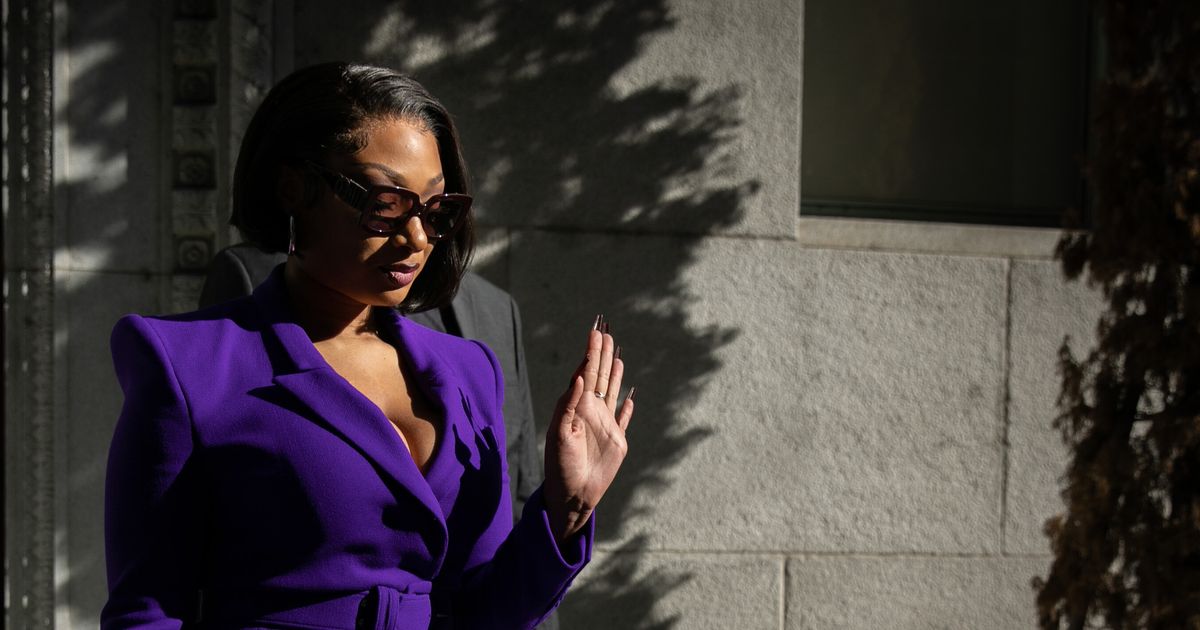 It is one of the most anticipated trials in recent years: Rapper Tory Lanez is facing three charges in the 2020 shooting of global superstar Megan Thee Stallion following an altercation between them and her former friend Kelsey Harris in Los Angeles. If convicted, Lanez faces up to 22 years in state prison.

Many have been unwavering in their support for Megan, believing her from the moment she came forward about being shot in the foot during an Instagram Live video in August 2020. There were others who said there was no way Lanez could have shot her.

The discourse has been disheartening. Truth be told, it has risen to the level of repugnant. Black women experience intimate partner violence at rates higher than their white, Latina and Asian/Pacific Islander counterparts. In fact, we are three times more likely to die because of it. But instead of rallying around victims, many feel the need to destroy and make them pariahs.

Megan has been met with extreme vitriol and what seems like an organized hate campaign. And it has felt especially cruel. When she took the stand Tuesday in the trial on assault and firearms charges, she offered jurors a glimpse into what the ordeal has been like for her. She summed up the past two years and spoke candidly about what it felt like to be a woman in a male-dominated industry. Yet it was her confession that this mistreatment has caused her to wish she were no longer alive that was most heartbreaking.

“I wish he would have shot and killed me if I knew I would go through this torture,” she said in her testimony Tuesday.

Yet, through it all, we’ve watched Megan smile and keep it pushing. From what we can tell, she’s refused to allow this traumatic incident to stop her. In fact, except for her emotional “Saturday Night Live” performance on Oct. 15, we haven’t seen her break. And, selfishly, we admired her persistence. But when we heard her testimony, we could no longer pretend we didn’t know the truth: All of it came with too high a cost. Her public perseverance has been at the expense of private agony.

When Megan came onto the scene, she was a breath of fresh air. We all rooted for the resident hot girl because it felt like we knew her. Then, just as her star was rising, her world came crashing down. In March 2019, Megan lost her mother after a battle with brain cancer. Having lost her father in her childhood, she was now navigating the world without both parents.

When Megan met Lanez, just months before the shooting in July 2020, she said they bonded over the loss of their mothers. Having lost his mother when he was a child, Lanez understood what Megan was going through, and she acknowledged that she was trying to “fill in the void” with the people around her. Can any of us imagine what it is like to lean on someone to get you through the worst time of your life — only for them to usher in an even worse experience? It is unfathomable.

Harris’ courtroom antics have left much to be desired. Lanez’s legal defense strategy is to convince jurors that Harris was the shooter; it has caused many on social media to speculate as to Harris’ endgame. But, more than that, it calls into question just who Megan had around her.

The immediacy of grief can cloud anyone’s judgment. The shooting took place as she was leaving a party, only a year after Megan’s mother’s death and amid her desire to create a new family to lessen the pain. Undoubtedly, there is guilt, shame and a belief that your actions — on some level — are what brought you here. Add online harassment and songs mocking your experience, who wouldn’t wish they were dead?

Conversations about suicide remain necessary, and with the recent death of celebrity DJ and famed dancer Stephen “tWitch” Boss, we are reminded that no amount of money or fame can insulate a person from that level of pain. But what about the people who may never consider taking their own life but rise every morning wishing they hadn’t woken up? What do we offer people who are disappointed that the last painful thing wasn’t the last thing?

At times, this world can be incredibly cruel, and finding light often seems impossible. I believe we are supposed to be light for each other. That will include fighting against injustice and using our platforms to speak for those who are being victimized. Meg may or may not see it, but someone else will, and they will know that they are not alone. Being light also means being there to remind people that the mistakes they made in trusting and loving the wrong people aren’t character flaws but opportunities for deeper growth and true healing. It’s important to find every way imaginable to let people know you are grateful that it — whatever it is — didn’t kill them, and they are still here.

Admittedly, I am nervous about the impending verdict and what it means for Megan. Regardless of what the jury decides, she will still be subject to unnecessary hate and ridicule. At the same time, it’s refreshing to know that she’s an advocate of therapy and has the resources to move through this ordeal as healthy as possible. Still, I pray for her heart and her spirit because it cannot be easy. Despite this tragedy, she has a beautiful life and deserves to flourish in it.

If you or someone you know needs help, dial 988 or call 1-800-273-8255 for the National Suicide Prevention Lifeline. You can also get support via text by visiting suicidepreventionlifeline.org/chat. Outside of the U.S., please visit the International Association for Suicide Prevention for a database of resources.
Advertisement