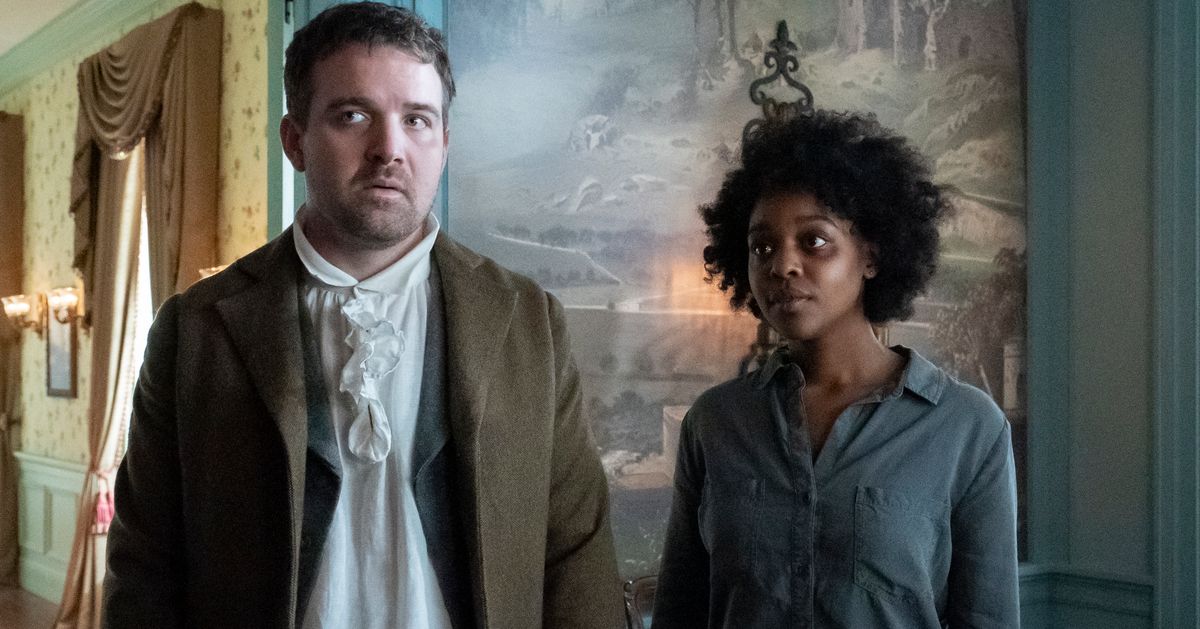 This story contains spoilers for FX’s “Kindred,” which premiered on Hulu Tuesday.

Octavia Butler’s engrossing time-travel novel “Kindred” quickly immerses readers into its protaganist’s world. Dana is an aspiring writer in Los Angeles who just moved into a new place with her husband, Kevin. The 1979 novel opens with Dana in the hospital; she had lost her left arm on her “last trip home.”

Those voyages start off feeling like dizzy spells and nausea and then transport Dana, and anything she touches, through time and space. Each time, she ends up in antebellum Maryland to save the life of Rufus, the son of plantation owner Tom Weylin and his wife, Margaret. Dana recalls her first time-traveling incident, on her 26th birthday, in which Rufus was drowning and she jumped in a river to save him. Eventually, she discovers that Rufus is her ancestor, and she must keep him alive until he fathers his descendent.

The novel jumps off the page as a wrenching and imaginative exploration of ancestry, race, gender and power all tangled together in a story about genetics, inheritance and control of the future. For years, Butler fans have craved an on-screen adaptation of the brilliant author’s work. But the new “Kindred” TV series, which tries to modernize parts of the story, falls short.

Branden Jacobs-Jenkins, the Obie Award-winning playwright of “An Octoroon,” helmed the project.

“It was my Moby Dick. I was just chasing and chasing it, and people told me I couldn’t do it,” said Jacobs-Jenkins, who insisted that “Kindred” should be a TV series instead of a film. “On every meeting I had, people would ask me what I wanted to do and I would say, ‘I want to make “Kindred” a TV show.’”

Courtney Lee-Mitchell had secured the rights to “Kindred” in 2008, Deadline reported. He sold the pitch to FX in 2016 and, in 2020, was given the go-ahead to shoot the pilot. During that time, Butler’s work was catapulted into the forefront of American literature: She became a New York Times bestselling author in 2020, more than a decade after her death in 2006.

There’s immense power in Butler’s storytelling; she effortlessly gets readers to follow Dana to 1815 Maryland, sometimes with her white husband. She describes the book, a mere 264 pages, as a “grim fantasy.” It is as captivating as it is head-scratching. “The author makes no effort to rationalize it,” said Robert Crossley, professor emeritus of English at the University of Massachusetts Boston, in the reader’s guide in the final pages of my 25th anniversary copy of the novel.

Unfortunately, “Kindred” the TV series takes great lengths to make sense of what’s happening to Dana, in such a way that does disservice to the source material. Jacobs-Jenkins’ adaptation sets the series in 2016, modernizing the story for today’s audiences, and it stars Mallori Johnson as Dana, an aspiring TV writer who spends her nights watching “Dynasty” to storyboard the soap opera as training for her career desires. She meets Kevin (Micah Stock), a waiter at a nice restaurant, on a night out with her Aunt Denise (Eisa Davis) and Uncle Alan (Charles Parnell). In this retelling, Dana and Kevin are in the nascent stages of dating, instead of being married, changing the stakes of their journey. Her aunt and uncle have a big impact on her journey in the adaptation; they were not mentioned in the book.

“I really wanted to get us close to Dana’s experience. I wanted to have us feel the oddness of what was happening, feel that period where she doesn’t trust her own mind, feel that period where she makes a choice and why she makes a choice,” Jacobs-Jenkins said. He adds that he wanted to “build a convincing interracial love story in real time that would explore the complexities of that choice.”

Jacobs-Jenkins expands Butler’s story to varying degrees of success. The acting is stellar — with Johnson in her first leading role. Her opening scene when Dana’s seemingly immobile on the floor was enrapturing in the same way as the opener of the novel. Supporting cast offer convincing turns, too: Sophina Brown as Aunt Sarah, whose children were sold off the plantation for furniture and fancy dishes; Austin Smith as Luke, an enslaved man who grew up with Tom Weylin (Ryan Kwanten); and Sheria Irving as Olivia, a free medicine woman who lives just off the Weylin plantation.

“In theater, we’re all about the actor. The actors are the vessel, and so you just got to give them the stuff they want to play and do and be and support them,” Jacobs-Jenkins said. “I feel really proud of all the work these artists have done and I think there’s a great desire to do it again.”

But where “Kindred” fails is in its investment in an unnecessary cast of characters, mostly rooted in the present day. Dana had just sold her grandmother’s brownstone in Brooklyn, on a whim, her aunt presumes. Denise questions her niece’s stability and assumes Dana has taken on her mother’s mental health issues. Meanwhile, her nosy white neighbors come across as caricatures, incessantly questioning her well-being, in a ham-fisted attempt to add more tension to the already crowded narrative. “Kindred” spends too much time on these dispensable side characters — when the Black actors on the plantation have richer stories and better performances.

Jacobs-Jenkins spent a lot of time at the Huntington Library in San Marino, California, where Butler’s notebooks and research reside in the archives. He said he pulled from those notebooks to expand the “Kindred” universe. Dana’s mother, only mentioned once in the novel, takes on a much larger role in the series — which I won’t spoil here for readers who are anxious to give the show a look.

The tone of the series toggles among absurd rom-com, dark thriller and intense historical drama, which is at times frustrating. Seeing Dana and Kevin fall in love while he’s cosplaying as her master on a plantation in the 19th century is pretty off-putting, to say the least. There are times when Kevin and Dana’s dialogue seem ridiculous considering their circumstances: When Kevin says, “It’s kind of like a retreat” early on, you may wince. When Dana tells Kevin to “Pretend it’s a game,” you may be thinking, “Are you kidding?” To be fair, those moments do mimic Butler’s own positioning of the characters early on in their journey.

“I began to realize why Kevin and I had fitted so easily into this time,” Butler writes in her novel. “We weren’t really in. We were observers of a show. We were watching history happen around us.”

Jacobs-Jenkins’ expansion of Butler’s world is ultimately what makes the series both a slog to get through and also somehow not deep enough. Perhaps the adaptation would have been better-served with a 10-part limited series, with much less plot set in present day and more fleshed-out storytelling and character development of the enslaved Blacks on the plantation.

The first season — eight episodes of varying lengths — only gets through about half of the novel, a huge gamble considering Hollywood’s penchant for canceling series too often and too early. Unfortunately, it is not guaranteed that audiences will see some of the most riveting and heart-wrenching parts of Butler’s novel.

Where “Kindred” the novel succeeds is how the author leads her readers on a time-traveling journey with full confidence that they’re along for the ride. It’s too bad the screen adaptation doesn’t trust its audience to do the same, and literally leaves them hanging in the season finale.

Dana has so many more big decisions to make that would affect her family lineage going forward. Thankfully, Butler’s novel expertly takes readers back in time with Dana, perhaps in less time than it’ll take you to watch this adaptation.

“Kindred” is streaming on Hulu.