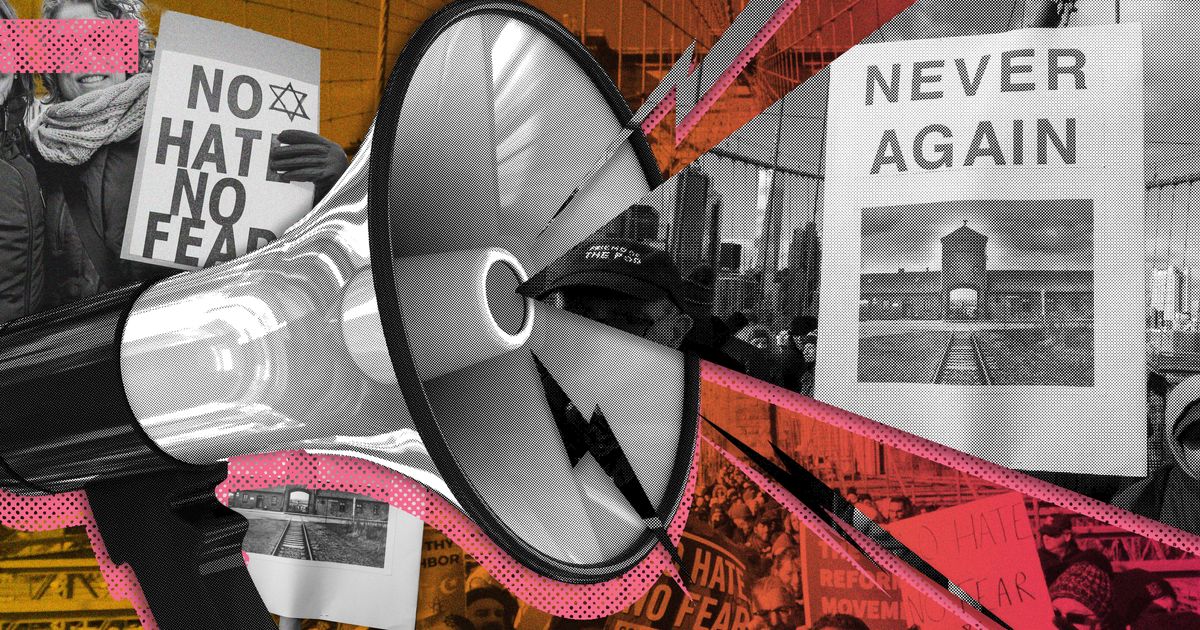 For American Jews, the threat of antisemitism has become increasingly worrisome over the last few years.

Though they make up less than 3% of the U.S. population, Jews are disproportionately targeted in hate crimes in America. Last year, 1 in 4 American Jews said they had experienced antisemitism in some form, according to a survey by the American Jewish Committee. Meanwhile, one-third of Jewish students experienced antisemitism on college campuses in 2021, according to a study by the Anti-Defamation League.

Thirty-nine percent of American Jews have changed their behavior out of fear of antisemitism, according to a 2021 report by the American Jewish Committee. This includes not publicly identifying as a Jew, avoiding carrying or wearing markers that would identify them as Jewish, avoiding places or events for safety reasons and avoiding posting online content that identifies them as Jewish.

So much of this fear can be attributed to the normalization of anti-Jewish rhetoric and conspiratorial discourse in public life: Republican candidates, NBA stars including Kyrie Irving and rappers such as Ye have all floated conspiracy theories about Jews with relative impunity.

In the case of Ye (formerly known as Kanye West), he has praised Nazi leader Adolf Hitler. While appearing earlier this month on right-wing conspiracy theorist Alex Jones’ Infowars show, the rapper and designer said he “loves” Nazis and that the “the Jewish media has made us feel like the Nazis and Hitler have never offered anything of value to the world.”

Discourse like this doesn’t just end in antisemitic memes being spread on Twitter. (Though it encourages that, too; antisemitic posts referring to Jews or Judaism have soared more than 61% in the two weeks since Elon Musk acquired the site.)

It’s much more dangerous than memes, said Beth Kean, the CEO of the Holocaust Museum LA.

“These celebrities are furthering Holocaust denial and emboldening right-wing extremist groups who now feel empowered to express their hate in broad daylight,” Kean said. “We see this in everything from antisemitic flyers littering lawns and cars in neighborhoods nationwide to large public displays with swastikas on the 405 Freeway in Los Angeles, a cemetery in Chicago and a stadium in Jacksonville.”

Today on the 405 in Los Angeles. We are waiting @adidas. pic.twitter.com/C39gLLu4Wb

Those who espouse such views seem to disregard the potentially violent effect their words may have on others, Kean said. The Holocaust started with just words, she noted.

“We know what can happen when hatred and bigotry go unchecked,” she said. “My grandmother was a Holocaust survivor. She watched her parents and siblings walk into the gas chambers.”

Jeremy Burton, the CEO of the Jewish Community Relations Council of Greater Boston, told HuffPost that all Americans need to recognize that antisemitism is not just a Jewish problem to fight; it’s everyone’s problem.

“We’re going to keep living our lives and building vibrant Jewish communities, but antisemitism is a virus that infects our society,” Burton said. “An America where Jews can no longer live freely without fear is not the America that any decent person should want to be part of.”

“Make antisemitism your problem to fight,” he added. “Don’t look away.”

What does taking a stand look like? Below, experts share six ways to help combat antisemitism and be a better ally to the Jewish community.

For Burton, the most deeply trouble part of this moment is how antisemitism is being normalized by so-called legitimate actors. Anti-Jewish statements that a few years ago would have been unutterable are all over our social media and television screens.

“There have been neo-Nazis out there for decades, but now they are having dinner with a former president,” he told HuffPost, referring to Donald Trump’s dinner at Mar-a-Lago last month with Ye and white nationalist Nick Fuentes. “And it isn’t just that a celebrity tweets a swastika but that tens of thousands of other people then ‘like’ and retweet that post within hours.”

Conscientious people have taken notice to some extent, Burton said, but more can be done.

“I don’t think people have fully wrapped their minds around how much is changing, how fast and how dangerous it is,” he said. “If they did, I’d like to believe that there’d be more wall-to-wall outrage than we’re seeing right now.”

Report antisemitism and call out discrimination.

If you experience or witness an act of antisemitism, extremism, bigotry or hate, report it to the Anti-Defamation League (ADL). If it’s an emergency, first call 911.

“Public reports enable ADL to gather information needed to educate lawmakers and law enforcement and to advocate for individuals and groups that are targeted because of their religion, race, ethnicity, gender, gender identity, sexual orientation, origin or level of ability,” Kean explained.

Report antisemitic posts on social media, too, she said, and put pressure on business leaders who are profiting off of hate and antisemitic materials (for instance, books that promote Holocaust denial on Amazon) and promoting hate speech.

If you hear someone say something antisemitic even in passing, be courageous and say something back. If it comes from someone you know, engage them and figure out if it is coming from ignorance or genuine hate, said Carly F. Gammill, the director of the StandWithUs Center for Combating Antisemitism.

“Try educating them calmly about why their words or actions are offensive,” she said.

Don’t just think, “I already knows what antisemitism is.” Dig deeper to understand the roots of antisemitism and the Holocaust.

Rabbi Isaiah Rothstein, a rabbinic scholar and public affairs adviser at the Jewish Federation of North America, thinks that many Americans are misinformed about Jewish history and misunderstand who the Jewish people are.

“They don’t always listen to how we define ourselves,” he said. “We are a multiracial, multiethnic and multicultural people whose families come from more than 70 countries around the world. We need to be students of each other’s past so we can drive towards a better future that works for all peoples.”

To further your understanding, visit a museum or education center near you to learn about how what started with “just words” led to the systematic mass murder of 6 million Jews and millions of others, including LGBTQ individuals and people with disabilities.

“Each day at our Holocaust museum, we teach the critical lessons and social relevancy of the Holocaust and other genocides to empower students and the public to stand up against hatred, bigotry and antisemitism,” said Kean, the CEO of the Los Angeles Holocaust museum.

Many of these institutions also offer opportunities to meet and talk with a Holocaust survivor to learn from a firsthand witness.

Not sure where to go? Check out the Association of Holocaust Organizations, an international network of more than 370 organizations and individuals working for the advancement of Holocaust education, remembrance and research.

Don’t allow antisemitism to be turned into yet another partisan issue, Burton said.

Take the time to learn and understand how antisemitism may show up in your own circles, and call it out there. “It may be a little more uncomfortable to do so, but that’s where you can make the greatest difference,” he said.

Antisemitism can be perpetuated by anyone, not just white supremacists.

“There is a misconception that antisemitism only comes from neo-Nazis and white supremacists,” Rothstein said. “While these ideologies are, of course, steeped in antisemitism, the last 60 years have seen a dramatic increase of antisemitism across the political spectrum, from the far right to the far left.”

By typecasting all antisemites as white supremacists, antisemitism ― which is present in nearly all spaces, communities and movements ― can too easily be dismissed.

“This limits our ability to identify, mitigate and course correct,” the rabbi said.

Encourage your workplace to include antisemitism education in its DEI program.

“For instance, many don’t realize that religion is only one organizing aspect of the Jewish people,” he said. “Jews encompass all races and ethnicities, and many hold transgenerational trauma from decades of systemic genocide, persecution and discrimination.”

Because there’s so much nuance and outside confusion about the Jewish community, consider pushing to include more on the Jewish American experience in your company’s training on diversity, equity and inclusion (DEI).

“Training and initiatives to increase awareness of antisemitism as a DEI issue would significantly reduce antisemitism, especially if the lessons were centered as a critical inclusion and belonging issue,” the rabbi said.

Teach your kids about antisemitism, too.

A national survey conducted by the ADL in 2020 showed that students who get Holocaust education in high school are more empathetic, tolerant and open-minded.

“Educators need to teach and facilitate age-appropriate discussions in their classrooms on how to address racism, bigotry and hatred, and legislators must prioritize anti-hate programs in schools,” Kean said.

In California, for instance, Gov. Gavin Newsom launched the Governor’s Council on Holocaust and Genocide Education to promote Holocaust and genocide education with the mission to provide students with the tools necessary to recognize and respond to bigotry and discrimination.

If you are a parent or grandparent, there’s room to educate, too. Maybe you talk to your kids about Ye’s recent comments and use it as an opening to discuss antisemitism and other forms of bias.

If you plan to visit a Holocaust museum or Jewish education center, bring the kids along.

“An ADL survey showed that students who had exposure to Holocaust survivor testimony have a greater sense of social responsibility,” Kean said. “Hearing survivors’ personal experiences and stories of courage, resilience and hope allows us to preserve their memories and steward their messages.”

I Was Taught Not To Tell Anyone I Was Jewish. Here’s What Happened When I Finally Did.

‘The View’ Fans Want Rachel Lindsay As A Permanent Co-Host: ‘She Brings A Freshness To The Table’
Testimony in R. Kelly Trial Set to Resume Thursday
‘The Bachelor’ Contestant Greer Blitzer Apologizes For Resurfaced Tweets Defending Blackface
Unbought and Unbossed: The Racism That Comes With The Fight For Reproductive Rights
If You’re ‘Infla-Dating,’ Here Are 10 Cheap Dates That Don’t Suck