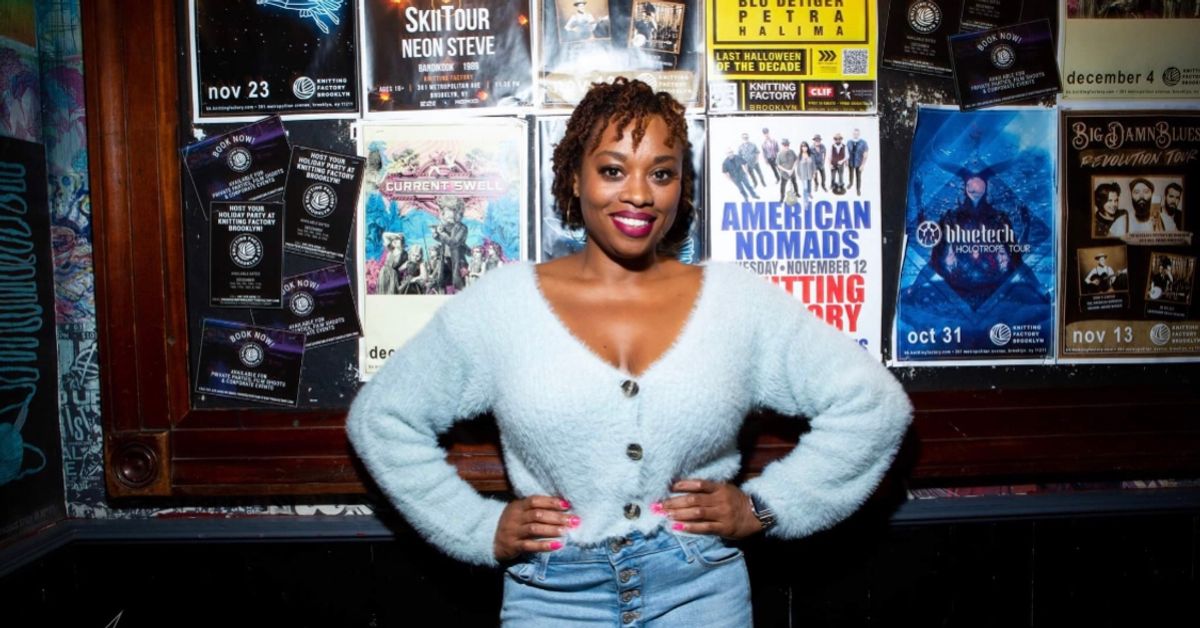 I’ve been a fan of comedy for years. I grew up, like many of us did, listening to the greats (yes, listening, because my parents had albums). I also remember staying up late to catch HBO’s “Def Comedy Jam.” I can still hear the late, great Bernie Mac saying “I ain’t scared of you muthafuckers” in my head as I write this — a mantra I’d need later when I began to develop my own stage identity.

“Def Comedy Jam” was raw, hilarious and probably the reason people are scared to sit up front at comedy shows today. So buckle up, because nothing was off-limits. A comic would hit with the jokes and roast the crowd, leaving everyone in tears. The roasting felt familiar because growing up, the dinner table was crowd work — my family had jokes for days and on any given evening, you might just end up being the butt of one.

In the ’90s, shows such as “Def Comedy Jam” and BET’s “ComicView” were like boot camps for aspiring comedians. The race and gender representation piqued my curiosity, leading me to believe that I, too, could one day get up onstage and tell jokes. As a Black woman, watching comedians like Mo’Nique command the room before even touching the mic inspired me to examine what her magic was made of. When Whoopi Goldberg, Melanie Comarcho and Wanda Sykes shared their stories onstage and on screen, there was a distinct vulnerability that shone through. It made them mesmerizing and accessible all at once — and it gave me the confidence to eventually get out there and shoot my shot.

Pursuing comedy was not easy, but the journey started early. I was a carefree child who lived off of candy, Nickelodeon and vibes. I was also the typical class clown and my grandfather, who was a pastor, played a pivotal role in shaping my comedy career. I remember pulling him aside one day before church services to tell him, “Hey, after you finish your sermon and saving folks, I got some things I want to share with the people.” He loved it, and gladly let me take the reins for a few precious minutes.

Eight-year-old me was fearless. And so after my grandfather finished preaching (closing with the fifth benediction — iykyk), I would go up and say whatever was on my heart: either a funny story or a reiteration of something that stood out from my grandfather’s sermon. Thinking back, I’m like, how bold is that to go up after the headliner? It’s like grown-up me pulling up to Chris Rock before he went onstage at Madison Square Garden and being like, “Hey bruh, let me do a tight five after you’re done.”

Adulthood swiftly robbed me of that gumption. Challenging life experiences overshadowed my playful audacity, and insecurities raged. I allowed my self-worth to be controlled by bad relationships with men, health struggles and good ol’ racism with a side of microaggressions. Being in the South, I would legit have bookers tell me that they “already have a Black comic on the show.” They would do this with other minorities too — like, “Hey, we got our one Asian or one gay person.”

Meanwhile, the lineup would be all white men sprinkled with the bare minimum of tokens. Sometimes bookers would even ask how Black or “urban” my act was — as if my Black-ass experience had a volume knob I should be turning up and down. It bothered me that they didn’t understand diversity within diversity. My parents moved around a lot when I was younger until they settled on the ’burbs — which was a culture shock. It was so white, my first crush was named Brett. That was a lot to unpack. Still, I refused to downplay my authentic identity and experiences for any audience.

There are layers to being a Black woman comedian. We have to work twice as hard for a laugh and bring it every single time, which only adds more stress. And god forbid a woman shows weakness, especially a Strong Black Woman; there is no room for mental breakdowns for us in this field. There are also the beauty standards. And the constant code-switching to fit into certain spaces. And this will come as a shock to absolutely no one, but the game is heavily run by dudes.

Many of you are nodding along because this applies to your industry as well. But here’s the thing about being a comedian: No matter how bright that spotlight is, I sometimes feel overlooked or altogether invisible no matter how hard I bring it. To be a Black woman and spill your heart onstage so that others can find beauty and levity in your humanity is a unique kind of exhausting.

When I started doing comedy, I never realized how much of my life and experiences I would expose onstage. In general, I’m pretty guarded — I need to trust someone before I get vulnerable with them. Hopping up onstage feeling butt naked emotionally, hoping that people not just like me but find me funny? It’s terrifying. But for me and so many other comedians, that type of transparency is incredibly freeing.

Initially, my act was observational mixed with a few jokes about my family life. It took me a while to find my voice. But baaybee — when I found my stride, I started telling all my business without a second thought. OK, maybe not all my business, but sometimes I leave shows asking myself, “Harpo, who dis woman?” There is so much power in owning who you are unapologetically. Especially when the world is always doubting you.

An added bonus is that sometimes a punchline, or just sharing your journey, will heal someone else. It’s healing for me to have those uncomfortable conversations onstage. I had to shed the self-consciousness I developed because a shitty, insecure ex made me painfully aware of all my physical flaws, just to boost his ego. And ironically, sharing my experiences about him and all the other bad dates I’ve had in New York has been both hilarious and therapeutic for me and some of y’all in the audience.

I also joke onstage about my fibroids, a reproductive condition I was diagnosed with a few years ago (it truly is the sex education no one asked for). During the pandemic, I launched a show series called “Make Fibroids Funny Again.” For the record, there’s nothing funny about the pain associated with fibroids, but the interactions I’ve had with women who find humor in the struggle have confirmed my purpose. More on that on my podcast ― shameless plug ― “Copay with April Body,” dropping soon. Oh, and I’m on a mission to end racial disparities in America’s janky health care system. So taking it easy, I guess.

Being radically open as a Black woman onstage is actually an act of resistance — and some people don’t want us to seize this type of freedom. Our courage to be vulnerable is truly a superpower. Hearing people laugh at some of my silliest ideas (or getting that church “hmmm” when a relatable subject hits) is my motivation to keep pushing. Moving into 2023, for me, means leaving the dusty dating pool on read and walking into a dark comedy club every weekend ready to talk about fibroids and any other part of my humanity. Word to Bernie Mac, I ain’t scared.

Diddy Announces Surprise Birth Of Baby Girl Named After Him

Selena Gomez Pops Up As Steve Martin, Martin Short Shred Each Other — And Tesla — On ‘SNL’

Michael Eric Dyson Weighs In On #BrittneyGriner Case In Russia
Nation Reels Over Sickening Video Of Tyre Nichols’ Deadly Beating
This Is What Having An Incarcerated Mother Can Rob You Of
Oregon Jury Awards $1M To Woman Told, ‘I Don’t Serve Black People’ At Gas Station
Sundance Goes Hard For Celebrity Documentaries This Year — With Mixed Results