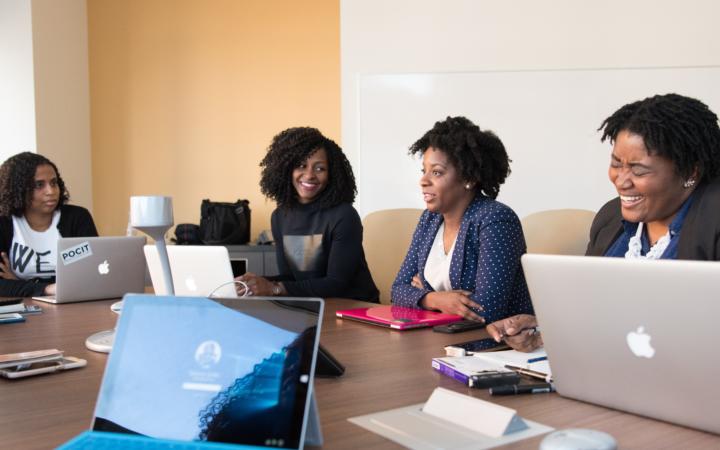 It’s embarrassing that even in 2022, we still watch most movies with little expectation of a person of color being represented onscreen. As if our brilliantly robust hues are too great to be shown for extended periods. We’re hidden away until the jokes run stale and our flavor is needed. Diversity is dangerous to those who relish in the abundance that it’s lacking, but that’s what makes it so important. The many shades of olive, mahogany, amber, and hazel culminate into an implacable concoction that can bulldoze the most unwavering perpetrators of alienation and exclusivity. When together we create a wall paved with unification, innovation, and universal amity, some of the most unstoppable forces in the world.

Their grins fade to chagrin. The audience fell weary with each character that graced the screen. Suddenly, a light, dawning a brilliant bronze hue, seasoned the gaze of the crowd, cleansing their palate with culture. Soon the picture was transformed, from a blank canvas to a beautiful dance between gold and tan sweeping across the scene. All the while, catching the attention of all those in attendance, even when their colors weren’t purposefully made prominent. One token made a world of difference.

We invest our capital in media embellished with funny quips and snarky remarks, but lacking in color contrast. The minds hidden behind oppressive stereotypes and social and political-isms try to dilute our influence, filtering us through their ideologies and morals. They’ve whittled us down to the one- dimensional emblematic characters they’ve portrayed us as. In spite of this, we’ve still managed to come together, leaving notable stains riddled throughout our society.

For example, diversifying the workplace has given way to various different issues being tackled from previously neglected angles. People of different cultures offer innumerable perspectives based on how their upbringing may apply to the plights befalling our country. The convergence of so many individuals from such a plethora of backgrounds also enlightens our community, exposing us to religious beliefs, foods, and traditions we weren’t privy to before.

By means of diversification, we’ve adopted more efficient practices for multiple aspects of life. As homo sapiens, much like wolves, we’re nomadic. We’re dependent on each other. Despite being so far removed from our feral roots, we still bear the seed we’ve sprouted from. From buying a service to paying taxes, we continue to rely heavily on one another’s strengths, we fund our protection, literacy, and environmental upkeep. The hands burdened with years of history echoing through every bone and vein work to the benefit of those who are deficient in an aptness for hard labor. Finally, when our threads run thin, we can bind them together to make us stronger as a whole.

We’re not just different people of different backgrounds, we’re pieces to a resplendent puzzle. We all represent a piece of history that when told in fragments, makes for a good fable. Some are farmers, fishermen, and butchers. Others are lawyers, doctors, and accountants. As the wit grows dry and the oppressors fade to black, we’re finally seeing ourselves as actors, pop stars, and runway models. Their butter lubricated fingers grapple at their popcorn, families gather around with eyes widened and fixed on the screen, waiting to be graced with entertainment. The previews finally retreat. Their bodies shake feverishly with excitement as the scene invites the audience on a surprisingly colorful ride.

How do you feel about diversity? How do you think the world would be different without it? Let me know your thoughts down in the comment section.

Zada Luby is a first-year student at Gwinnett Technical college, she’s a nursing major who loves art, nature, and helping her community grow. Follow her interests and more here.