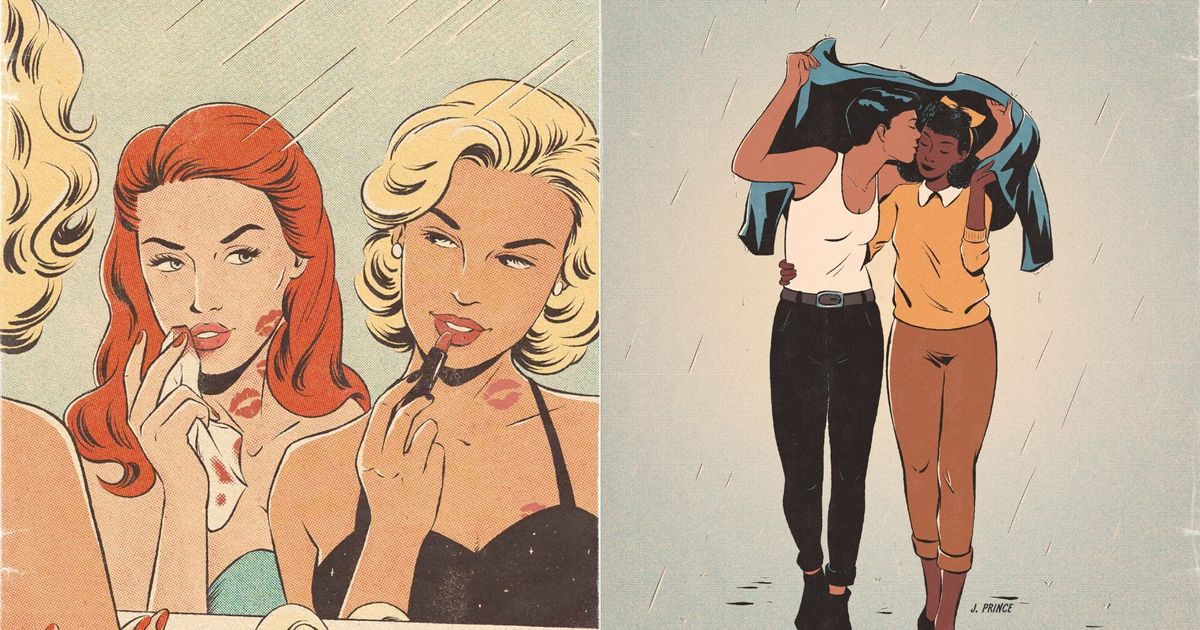 Price’s pinup-esque illustrations, which she posts on her popular Instagram page, feature queer couples stealing kisses in between rows of books at the library:

And coyly reapplying their lipstick after a makeout session:

In more fantastical work, we catch a glimpse of lovelorn lady sailors falling for sea-swept sirens:

The artwork is reminiscent of Todd Haynes’ instant queer classic “Carol” and Prime’s new more queer-forward reboot of “A League of Their Own” ― both of which Price has created fan art for.

Price likes to describe her work as “lesbian and Sapphic storytelling in a vintage-inspired aesthetic, especially comics and pulp illustrations.”

Given how rare it is to see old images of queer couples happily existing in private and public spaces, Price looks at her work as a quiet form of activism. (In 2016, the Brazil-based artist won a contest and had her work featured as the official poster of the San Francisco Dyke March, which spurred her to create more LGBTQ+ art.)

“I believe illustrating with this vintage-inspired aesthetic helps to combat the erasure of our existence in history,” she said. “That’s why I like to draw positive and often wholesome stories.”

Price draws inspiration from unearthed photos of lesbian and gay couples (“I like imagining the story behind them; it makes me wonder how many queer stories from the past are waiting to be told,” she said), and midcentury advertising and pulp fiction work from artists like Tom Lovell, Gloria Stoll Karn and Stan Pitt.

Price’s sexier, more noirish prints call to mind the covers of lesbian pulp fiction titles published largely from 1950 to 1969, which were popular but took quite a bit of chutzpah to buy if you were a female reader. (Given the absence of similar work at the time, author Joan Nestle called the paperback novels “survival books.”)

“Lesbian pulp covers had sometimes very explicit, eye-catching art for that period of time when being gay was a crime,” Price said. “I particularly like the ones where there’s a subtle look or touch between the characters.”

Below, Price shares some of her favorite retro-inspired illustrations. Head to her Instagram or site for more.

10 Books About Love And Life For LGBTQ Teens