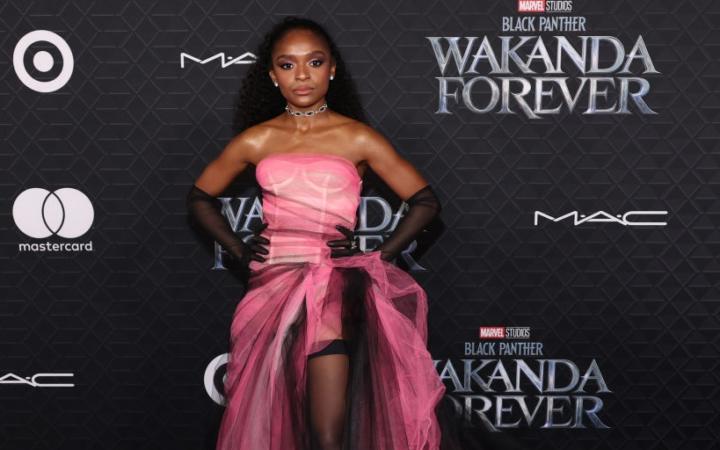 [Spoilers for Black Panther: Wakanda Forever are included in this article.]

Black Panther: Wakanda Forever for sure brings new faces into the fold.

Between the hustle and bustle of press interviews and red carpets, you can find Marvel’s newest star Dominque Thorne. She sees value in lighting a few candles, putting on her favorite tunes and rolling out a yoga mat. For the 25-year-old actress, finding time for reflection, peace and gratitude is a top priority.

Just two years ago, Thorne inked a deal with Marvel Studios to take on the role of ‘Ironheart‘, a brainy 19-year-old tech genius who was introduced in Marvel Comics in 2016. The character serves as the focal point of the highly anticipated Disney+ series spotlighting the life of the Chicago-born, Tony Stark-inspired inventor set to debut in Fall 2023.

Now, a bit earlier than expected, Thorne is getting an opportunity to introduce the world to Riri Williams as a key player in ‘Black Panther: Wakanda Forever‘.

In ‘Wakanda Forever,’ movie-goers meet Riri on the campus of MIT where she is pursuing her undergraduate studies. She’s outwitting her academic professors and building vibranium-detecting machinery for class projects. The film, which explores the struggle between the fictional underwater kingdom of Talokan and Wakanda, chronicles their fight to protect their native lands and resources.

Interestingly enough, the film is grounded and finds levity in characters like Riri.

Alongside an all-star lineup of co-stars, Ryan Coogler detailed that Thorne’s character is a fresh energy to a film that is, at its core, about accepting change and redefining legacy.

“It gave us the opportunity for [Shuri] to have somebody to bounce ideas off of in a steel-sharpening-steel type of way. Also, it gave us a great window into the African American community, which was present in the first film through the character Killmonger,” Coogler said.

Though Thorne said she and Riri don’t share the same knack for technological expertise, her connection to the character was in many ways informed by her own upbringing.

As the daughter of Trinidadian parents, a first-generation American and first-generation college student, Thorne often found herself torn between the push and pull of traditional education and her passion for performing arts.

The path toward professional success in the states was both uncharted and boundless.

First, she trained in theatre, gaining her confidence on stage as a drama student at New York City’s Professional Performing Arts High School where she was named a National Young Arts Winner for Spoken Theater and a United States Presidential Scholar in the Arts. Her early teenage successes were quickly followed by her undergraduate studies at Cornell University where she studied Policy Analysis and Management and graduated with a Bachelor’s Degree in Human Development and Inequality Studies.

“If I ever felt like a fish out of water, being at an Ivy League institution was definitely like the height of that,” she said.

Unable to shake her pull towards the dramatic arts, she would learn to juggle film auditions in her free time.

During her sophomore year, Thorne auditioned for the role of Shuri in Black Panther. She made it to the final rounds of auditions with now-costar Letitia Wright. Though she wasn’t cast in the first movie, she felt certain that with faith, time, and the right role would come her way.

In the years that followed, she would make her feature film debut in Academy Award-winning writer/director Barry Jenkins’ “If Beale Street Could Talk” and star opposite Daniel Kaluuya and LaKeith Stanfield in “Judas and the Black Messiah.”

She credits her “unshakable faith” as a driving force on her professional journey.

“The purpose of me being wherever it is that I am will reveal itself and prayerfully it will be something that is positive and meaningful to if not anyone else, then to me and my family,” she said.

Among her favorite experiences on set, Thorne said she was especially grateful for the moments shared with castmates, Angela Bassett and Michaela Coel. She described them as inspirations for her work. Riri Williams’ story intersects directly with Bassett’s Queen Ramonda. Ramonda sacrifices herself to protect Riri in the face of attacks from the film’s villain Namor (Tenoch Huerta).

Even in the face of tremendous loss, Thorne found appreciation for the film’s thoughtful approach to addressing grief and heroism.

“The story looks like Black womanhood, it still looks like the Black female experience. Now maybe it’s something very different than what we started out with. But it’s no less truthful,” she said.

There’s still a bit of time before we’ll see Riri Williams return to our screen.

Thorne said she’s excited for fans to see Ironheart lead writer Chinaka Hodge’s rendition of the character when the series premieres in 2023. There, fans will see Riri navigating her new superhero responsibilities at home in Chicago with her family.

Thorne expressed her gratitude for Marvel Studios’ investment in creating space for more representative and authentic storytelling. She believes it can empower young audiences. This includes advanced community screenings of Black Panther: Wakanda Forever for nonprofits supporting youth in STEM and the arts and an exclusive screening of Black Panther: Wakanda Forever at the November 2022 AfroTech Conference.

When asked if she had any advice for aspiring young actors who hope to pursue roles like her own, Thorne said,  “I think that once you’ve identified what that thing is for you that showing up as your very best self and offering the very best version of yourself to that present moment is oftentimes the quickest way to get to where you want to be.”

Tamia Fowlkes is a graduate student at Columbia Journalism School pursuing her M.S. in Journalism. She currently serves as the National Association of Black Journalists Student Representative and her work has been featured in POLITICO, The Milwaukee Journal Sentinel, Isthmus, Gen-Zine and ​​The Wisconsin State Journal. Follow more of her thoughts here.