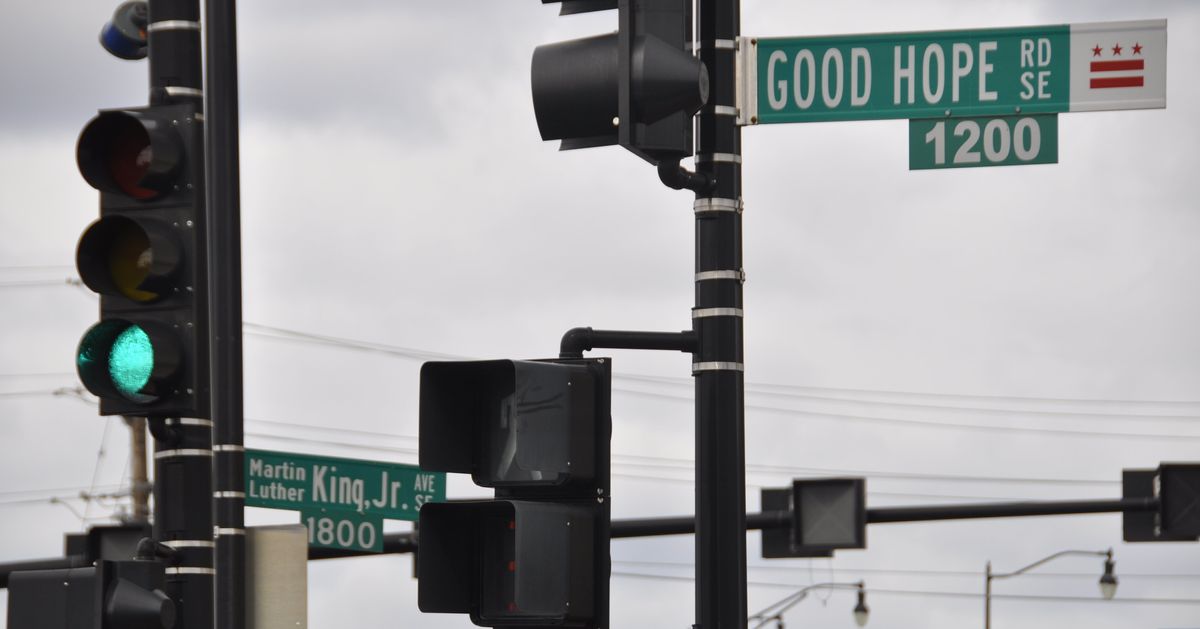 Gentrification is not a fast death. It’s a slow warming over that works its way into the body. There is a discovery that things have changed and then a new kind of normal. One day it’s a corner store, the next it’s an organic-hot-yoga-dim-sum communal space for people who don’t look like you.

Chocolate City wants to remember one of their own — but there has been pushback from interlopers who want a voice in the naming of things. Because that’s the other side of Columbusing an area: it’s not just pillaging the land, it’s changing it entirely. In Washington, D.C., that’s playing out in the fight to rename Good Hope Road in honor of famed Mayor Marion Barry Jr.

It’s a new front in the war on race and public memory. A bizarre rhetorical battle is raging between Phil Mendelson, the Chair of the Council of the District of Columbia, who is white, and Councilmember Trayon White, who is Black and represents Ward 8, the Blackest ward in this gentrifying city.

White first floated the idea to rename a street in his ward after the late former mayor in 2019. He accused Mendelson of using his position to block the effort. Mendelson claimed this year that he needed more time for more hearings to decide. White, who convinced all but one of his colleagues on the council to co-sponsor emergency legislation to change the street name immediately, dismissed this move as more obstruction and delaying tactics.

This is an election year. This is a strange hill to die on. This is a solidly Democratic region that that only recently changed public streets and statues named after white supremacist Confederate traitors to America. Trying to block any recognition for Barry, a heroic, controversial figure who built Black economic and political power and rose from the political dead, is an exercise in futility.

Not only is resistance futile, renaming the street in the Blackest neighborhood left in gentrifying D.C. may be one of the only hopes for protecting it from the incursion of money and interests that profit from racism. All of it shows the long hand of Marion Barry from the grave.

Chairman Mendelson and I have crossed swords before over white supremacy in the city’s arts policy. In emergency legislation last year, his colleagues unanimously rebuked his effort to toss me and Barry’s widow, Cora Masters Barry, from the city’s arts commission over the issue.

Mendelson will face voters from across the city’s eight wards next week. It’s baffling that the chairman would choose to antagonize Black voters across the city by picking this fight now.

I say baffling, not surprising. All across the country, swaths of Black communities have been swallowed up by the beast that is undefeated: gentrification.

The way things usually happen is the neighborhood is discovered, then transplants move in, the rent prices increase and suddenly an area once considered “North of Massachusetts Ave.” has suddenly become known as “Noma.”

It matters who gets to decide when it is time to speed up or slow down the naming of things. This is why the community’s fight to keep Barry’s name alive is not only important — it’s essential.

In the annals of Black Power, one anecdote explains why so many D.C. voters have zero tolerance for any slander or disrespect toward the name and likeness of the late “Mayor for Life” Marion Barry Jr.

As Cora Masters Barry told me in a 2020 oral history recorded for the People’s Archive of the District of Columbia, her husband once hosted a group of Wall Street brokers. They arrived in a jet. They wanted the city’s bond business, which represented billions of dollars.

Marion Barry Jr. made them wait 30 minutes. After thanking them for coming, he theatrically looked around to the sea of white faces in the room. “Is this it?” he asked. “I don’t see anybody around this table that looks like me, and you want our business.”

He sent them away and told them to return when they had found some people who looked like him. The brokers complied, and that launched the careers of many Black Wall Street executives and Black-led firms.

Black Power is more than just symbolism — planting Black faces on historically white structures. As we see in the candidacy of Herschel Walker in the Georgia Senate race, electing Black leaders is an empty and cynical exercise absent an understanding of racial inequality and the courage to do something about it.

Barry was in a league of his own — often to his own detriment. He was unapologetic about standing for his people. When he was elected mayor in the late 1970s, the city was more than 70% Black, earning it the “Chocolate City” moniker. But even as the faces of the citizens were Black, the power, like in the rest of the country, was white. Barry was a veteran civil rights organizer, and once in office, he moved systematically, structure by structure, to bust the doors open to the city’s ethnic majority, the descendants of the enslaved people who built this country for free.

Places where Black people were locked out, Barry forced them in. Black people got jobs leading schools, in the police and fire departments, government agencies, and received billions of dollars in government contracts, as historian Laura Pearlman explains in ”Democracy’s Capital.” Barry used his position to create the region’s Black middle class that is arguably the most powerful in the world.

Before buzzwords like “diversity and inclusion,” “racial equity” and “reparations” came into dominance, he invented policy mechanisms to do it. Of course, many of these efforts drew an intense backlash and were challenged in the courts. He was targeted by the FBI. His own personally foibles, his battles with addiction captured on a grainy hotel room video, drew national mockery. Many people (wrongly, it turns out) left him for politically dead. His political comeback in 1994 catapulted him to mythical status, making him a global Black superhero.

Today, D.C. is famously perhaps the fastest-gentrifying city in the United States. The Black population has dropped to 46%. However, the past, present and future of Black Power remains. It is in the local music genre ― go-go. It is the local swag. This legacy is historic and cultural, economic and spiritual. Black D.C. will not tolerate being discussed by our elected leaders in the past tense. We are still the largest ethnic group in the city. We are still here.

The effort to start naming streets and buildings after Barry began immediately after he passed away in 2014. It resurfaced in 2019, evoking mixed feelings among the Black community that has always been divided over how to honor Barry’s legacy and many other political issues.

Some residents in the neighborhood where Barry staged his comeback told a local reporter they are worried that the street, Good Hope Road, is too desolate and depressed to befit such an inspirational figure. Other people did not want the inconvenience of change.

Others worry stamping Barry’s name on an underresourced part of the city racializes the neighborhood in ways that are not helpful for economic growth. They’re right. Ironically, Martin Luther King Jr. avenues across the country are located in economically depressed places. I’m also thinking about the Brookings scholar Dr. Andre Perry’s work on residential real estate markets. Simply having a Black face devalues real estate values and neighborhoods. Even controlling for class, amenities and other things that make a neighborhood desirable, the average Black home is devalued, on average, by $48,000 simply because the owner is Black.

Like colonialism before it, there is a racial profit motive for gentrification. The more of us leave neighborhoods, the more money white real estate investors make. But we don’t have to kowtow to real estate market structures that are fundamentally rooted in racism and white supremacy.

The Anacostia neighborhood where the current Good Hope Road is located is the last frontier for gentrification (and Black empowerment). It has the largest concentration of Black-owned businesses in the city. It also is benefiting from city grant programs that help legacy Black businesses acquire their properties to stop displacement.

Many see this neighborhood as hope for developing a model for doing community development in a way that actually includes Black people. This effort is a fitting tribute to Barry. Having Barry on the street name may be added insurance that Black people will not be forgotten and that current businesses and residents will not be gobbled up and displaced.

In ”Silencing the Past,” the late scholar Michel-Rolph Trouillot describes how Black people and our history battle erasure at every turn. Whether it is in your local city council or in school curricula across the country, all Americans who care about democracy and history must resist.

After this unpleasantness passes, I look forward to driving into Ward 8’s Anacostia, passing through Malcolm X and Martin Luther King Jr. avenues into the community where Barry staged his improbable political comeback in the 1990s. It will be more than just mere symbolism when the street navigation says: “You have arrived on Marion Barry Avenue.”