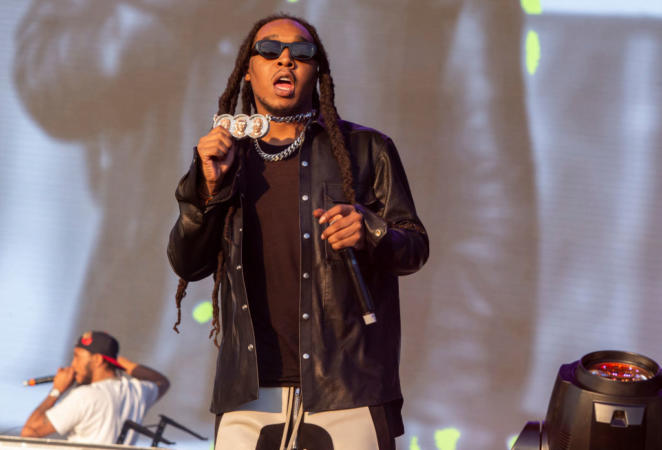 Takeoff, one-third of the rap trio, Migos, was shot and killed early Tuesday morning in Houston, Texas. According to KPRC 2 Houston, police arrived at the scene of a shooting around 2:40 a.m. at 810 Billiards & Bowling. Upon arrival, police confirmed that an unidentified man described as a “Black male in his 20s” had died at the scene. Two other individuals were taken to the hospital.

@HoustonPolice released a tweet at the reports of the initial shooting

After the reports of the shooting, a representative for the group later confirmed that the deceased male was Takeoff.

In a press conference, Lt. Salazar of the Houston Police Department reported that 40 to 50 people were still at the location when the shooting occurred. Officers stated that upon arrival, a large crowd surrounded a man with a gunshot wound to the head or neck.

Authorities also stated they found multiple shell casings on the third level outside the bowling and pool hall.

Authorities are currently reviewing surveillance footage to determine what led to the shooting.

Takeoff was accompanied to the private event by fellow Migos member, Quavo. The two recently released their project Only Built for Infinity Links, under the moniker Unc & Nephew. This was their first project sans the third Migos member, Offset.

Joe Biden Can Confirm Even More Judges If Democrats Win Georgia’s Senate Race
Congress Is Still Too Old And Too White. Send Help.
Teodoro Obiang, World’s Longest-Serving President, Extends His 43-Year Rule And Sets Up Son To Succeed Him
Viola Davis Shares The Cute Way She Plans To Celebrate If She Scores EGOT Status
Jonathan ‘Hovain’ Hylton, Cherished And Influential Music Industry Leader, Has Passed Away