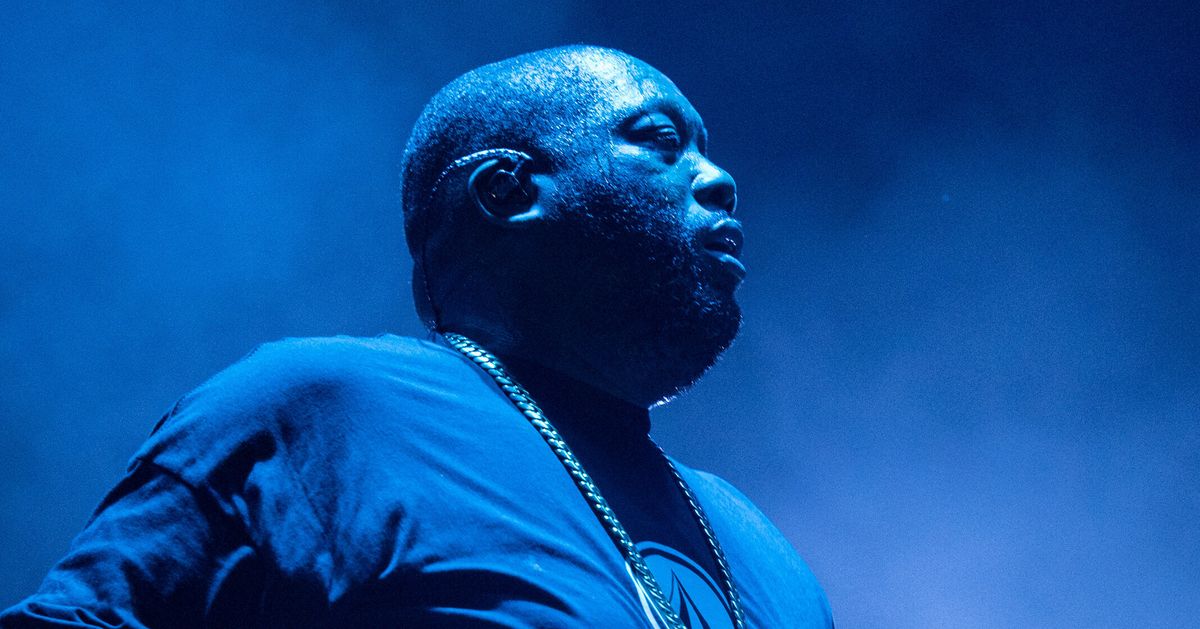 Kanye West’s antisemitic, anti-Black, misogynistic dribble is exhausting. Or, as writer Damon Young pointed out, ”it’s boring.” That doesn’t mean it shouldn’t be addressed, but it’s also nothing new. He is a Black man who believes himself a prophet. He mistakes his master craftsmanship for that of a genius and uses his platform to espouse his hate. We’ve seen this before. This hate is not new. It’s a well-worn, tired and beaten path. At this point, the Chicago rapper is a Pentecostal preacher who lost his way or a Black Israelite with a self-written, heat-filled Bible.

Either way, West’s (now legally goes by Ye) megaphone appears forever tuned to invidious indictments against Black people. Not to mention, his voice is nauseating, reckless and fraught. His stream of conscious rants are as divisive as they are nonsensical.

From his easily dismissible insidious claims to the antagonizing hurtful comments about slavery and the holocaust, the famed music producer has turned into an outlier yelling from the balcony to resuscitate his relevance and career. But for everything the self-proclaimed, non-reading Ye lacks, he’s just as easily ignorable for the same reasons. He’s not informed. And despite being passionate, he doesn’t know what the hell he’s talking about. As a Texan would say, “He’s all hat and no cattle.”

And then there is Michael Santiago Rendor, also known as Killer Mike, one-half of the political rap group, Run the Jewels. He’s complicated, enigmatic and calculated. And he is vastly more dangerous than Ye.

During a recent appearance on “Comedy Central’s Hell of a Week with Charlamagne Tha God,” Killer Mike praised Georgia Gov. Brian Kemp (R) for “running an effective campaign.” He added Kemp “went to an all-Black boys school that’s run [sic] by a conservative Black man down in Albany, Georgia.” He couldn’t have been more proud of Kemp’s work reaching out to the Black community — despite having effectively and consistently tried to prevent them from voting.

Killer Mike implied that Kemp’s opponent — in 2018 and this year — Stacey Abrams needs to go “everywhere Mr. Kemp just went” as if she’s not leading in every statistical category among Black voters. He doesn’t seem to understand that Abrams is of the Black community. She doesn’t need to visit the community she’s a part of. What he has done here is what makes him so dangerous. He’s positioning himself as a Black voice of reason instead of a shill for the Republican party. So when Killer Mike spouts ridiculous claims implying that Abrams isn’t doing enough Black outreach, she’s forced to answer despite it not being a concern.

“I think the manufactured crisis [is] designed to suppress turnout … I’ve done more than 50 events in the Black community,” Abrams said, on “Fox News Sunday,” The Hill reports. “I’m excited about the turnout we’re seeing — I’m excited about the engagement that we’re seeing. I know, however, that every election cycle, there has to be some worry, and in this case, it is a worry that’s being manufactured.”

Abrams added, “But it is always an opportunity to engage. I do not take any voting bloc for granted. I may be African American, but I’m not entitled to a single vote that I don’t earn.”

Killer Mike was forced to address his comments on social media after many called him an “opp” (a term used in the Black community to describe one’s opponent) to the democratic process. Some even posted photos of him and Kemp from their 2018 meeting.

Don’t waste ya time being mad a 2 year old picture of me. U better get to door knocking and Canvassing for your side. I have not publicly endorsed any candidate and will be keeping my vote a private matter. Twitter aint real so get yo ass out & 🗳 cast a vote. 🤷🏽‍♂️😉😎

What makes Killer Mike’s brand of politics so dangerous is that he is actually in the field. He’s doing the work to mobilize. And he’s equally as damaging to his legacy when he legitimizes Kemp, whose life work appears to be undoing the Black vote. It’s troubling not knowing where the Atlanta rapper’s intentions lie. But if we go off his work, it appears duplicitous at best. It’s disconcerting to watch a loquacious Black man with a platform prop up someone who wants to undo all the good work of the civil rights leaders before him. That is way more perilous than anything Ye could do.

Killer Mike’s rise as a voice in politics crescendoed in 2014. During a show in St. Louis, Missouri, he took a moment to stand in solidarity with Ferguson protesters, who were still in the middle of the uprising after Darren Wilson, a former St. Louis police officer, shot and killed Michael Brown. Killer Mike didn’t just praise those protesting peacefully; he also noted that his thoughts and prayers were with those “who couldn’t hold their anger in” because “riots are only the language of the unheard.” He quoted Dr. Martin Luther King Jr. — the civil rights figure liberals forget about when rioting happens.

The snippet from the show went viral. Killer Mike was all over the airwaves as a voice — not only of reason — but of change. He called for Americans to hold elected officials accountable. He called for cops to be prosecuted for their crimes. He had the uncanny and almost unquestionable ability to be loved by the streets, the media, and the left. And then something happened. As Killer Mike kept talking, the words didn’t seem as passionate; the focus appeared… off. It was like Killer Mike was no longer a killer. He was just Mike in accounting who didn’t understand fervent violence after a police killing. He was the person who then Atlanta mayor Keisha Lance Bottoms called to be the voice that told rioters to go home.

“I’m mad as hell,” he told reporters in 2020, just a day after a police officer murdered George Floyd. “I woke up wanting to see the world burn down yesterday because I’m tired of seeing Black men die.”

He added, “Now is the time to plot, plan, strategize, organize, and mobilize.”

He ended his plea by telling protesters, “If we lose Atlanta,” he asked, “what else we got?”

Lately, he’s had quite the shift in rhetoric, tone and approach. The transformation of Killer Mike has been subtle. For one, he is not just a reader of books; he’s a well-informed orator of history. He’s not just the old head in the barbershop telling the young folks to get out and vote; he’s the barbershop owner.

“Working-class men can’t join a social club, so we go to the barbershop to express our thoughts, concerns, laugh, joke about sports,” Killer Mike said in a short documentary about his Swag Shop barbershops.

For all of his communal, grassroots efforts and talk, Killer Mike was highly criticized in 2020 when, for only reasons that make sense to him and Republicans, the rapper agreed to meet with the biggest problem facing Black people in Georgia: Kemp.

Since taking office, Kemp has worked tirelessly to suppress the Black vote. A December 2019 study from the Atlanta Journal-Constitution found that while Kemp didn’t order the closures of precincts and polling-site relocations, he did encourage them and reportedly devised the guidelines for how to go about it.

Kemp was blatant in his attempt to keep Blacks from voting in the 2018 election against Democrat darling Stacey Abrams as she pushed to become the first Black female governor in America’s history. Boston Globe columnist Renée Graham noted, “Georgia’s gubernatorial race wasn’t an election. It was an attempted strong-arm robbery.”

Graham wrote that the voting sites were “so chaotic that a judge ordered several precincts to extend their voting hours.” Her story revealed how people struggled to vote during that election.

“Several precincts in one Georgia county suffered so many technical glitches that voters were forced to use paper ballots. Others waited more than four hours in lines that twisted around voting sites. NBC News reported that, in another location, voting machines ran out of battery power because they had not been equipped with power cords,” Graham wrote.

She wrote that hundreds of people arrived to vote that Tuesday and found out their right to vote was denied. “Under Kemp, more than 1.4 million people have been purged from the state’s voter rolls. This year, he suspended 53,000 voter registration applications, 70 percent of them belonging to African Americans,” Graham explained, writing that their registration forms were not an “exact match” to the government database.

So it was utterly bizarre AF for Killer Mike to meet with the enemy of the Black vote. This was Papa Smurf meeting up with Gargamel. This was an Avenger having a sit-down with Thanos. This was anyone trying to make Jeffery Dahmer their internet boyfriend after watching that Netflix show.

If Killer Mike was actually in the business of promoting Black progress, then Kemp would be his mortal enemy. Kemp would be the last person he’d forge a friendship with. But none of that stopped Killer Mike from sitting with the Impaler of the Black Vote.

“I feel like that was the first meeting of many, and I look forward to sitting down again and gauging our progression because I want this state to be the most progressive, the most money-making, the most educating, the most wonderful, dynamic state in the union,” Killer Mike said after meeting with Kemp.

“More than anything, I’m a Southerner. I’m a Black man. I’ve been raised in a traditionally Democratic city. But my state is pretty conservative, always has been. So, as a Southern man, I connected pretty much instantly with him. Politics and policy don’t matter to me as much as human decency and principles, and he seemed to be a principled human being when I talked to him.”

I don’t blame you if you have trouble understanding what Killer Mike is saying here. Let me see if I can explain it. He’s giving a nod to the tradition of white men as the ruling class of the South. As such, the rapper appears to know his place and has no problem with Kemp’s policies or politics. Because Kemp seems to have principles, which include making it damn near impossible for Black Georgians to vote.

Kemp walked away from the conversation, saying he wanted to stop by one of Killer Mike’s barbershops for a haircut. But if you thought the marriage between the outspoken wordsmith and Kemp was strange in 2018, how about the interview he did with former NFL running back, phony sheriff and Republican Senate candidate Herschel Walker?

That’s right, Killer Mike sat down with Walker in what many have called one of Walker’s most fluid interviews. Some have speculated that Walker was given talking points . And if that has you scratching your head and wondering when Killer Mike became the arbiter of inroads for Republicans looking for Black support, I don’t blame you. Politics make strange bedfellows, indeed.

Killer Mike uses his platform and voice to hurt the people he claims to care so much about. It’s a strange dichotomy watching a man who raps about the death of Eric Garner make nice with Kemp while actively hurting the Black woman who helped save America from a second Trump presidency. And that’s way more dangerous than any stupid racist rant from a rapper whose better days appear to be behind him.