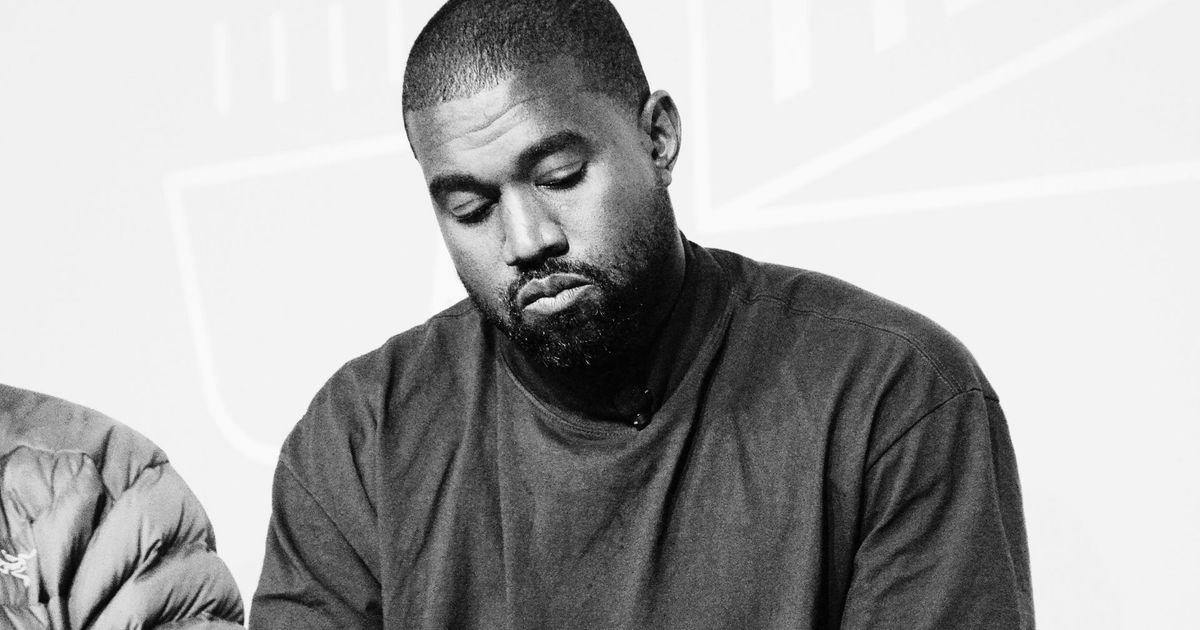 But as someone who has bipolar II disorder, Malik hates that the “Donda” rapper has basically become the poster child for bipolar disorder and untreated mental illness.

West, who legally changed his name to Ye last year, has opened up about his experiences with bipolar disorder and manic episodes on a number of occasions, most notably on the 2018 album “Ye” and in a 2019 interview with David Letterman. (“You have this moment [where] you feel everyone wants to kill you,” he told the TV host. “You pretty much don’t trust anyone.”)

West’s candidness about life with bipolar disorder is one of the things that drew Malik to his music.

“It gave me a personal connection to his work ― those frank references to bipolar disorder in his albums,” Malik told HuffPost. “But I also think that’s not an excuse for what he’s doing now.”

West has a history of controversies, but his most recent troubling behavior started at the beginning of this year, when he began online harassing his ex-wife, Kim Kardashian, and her then-boyfriend Pete Davidson. (That culminated in a claymation music video depicting Davidson being kidnapped and buried alive by the rapper.)

Now West is making antisemitic remarks: Earlier this week, after days of criticism over his antics at Paris Fashion Week (West wore a T-shirt reading “White Lives Matter,” a phrase the Anti-Defamation League categorizes as a hate slogan), the rapper was locked out of Twitter after posting a tweet threatening that he was “going death con 3 On JEWISH PEOPLE.”

Days later, West stood by his remarks. “Hey, if you call somebody out for bad business, that means you’re being anti-Semitic,” he told the New York Post Wednesday night outside of a screening of conservative pundit Candace Owens’ new documentary. “I feel happy to have crossed the line of that idea so we can speak openly about things like getting canceled by a bank.”

With every Ye controversy, his mental health gets dragged into the conversation. Inevitably, die-hard fans come to the defense of the rapper, suggesting it’s not fair to judge someone with bipolar disorder who’s “off his meds again” and in the midst of what looks like a manic disorder.

“It’s extremely harmful for people with bipolar disorder to see these excuses being made,” Malik said. “I’m pretty open about my diagnosis, and [behavior like West’s] immediately changes how some people look at you, like you’re someone who can fly off the handle unexpectedly.”

“It informs trust, and Kanye, as well as the people making excuses for him through his illness, are perpetuating stigmas that make it harder for everyone with this illness,” the screenwriter said.

Aranck Bundy, a 21-year-old from New Jersey who was diagnosed with bipolar disorder recently, feels similarly; his manic episodes have caused him to do some surprising things, but they’ve never given way to bigotry. During one particular manic episode, Bundy said he drove nonstop to Florida with a friend on a whim. His body crashed the next day, exhausted from the high and the 17-hour drive.

“More recently, I’ve had the urge to drive across the country to see someone I’ve been interested in just because I could, and I wanted to see them,” he told HuffPost. “Luckily, I’m back on my medication, because I guarantee I would do it if I wasn’t.”

Needless to say, Bundy gets West’s impulsivity. What he doesn’t get is the antisemitism. He worries that people will conflate West’s bipolar diagnosis with all variety of extremist views.

“Many people are racist and antisemitic without being bipolar, so why do people think he’s being a shit person mainly because of it?” Bundy said.

“Being bipolar doesn’t inherently make someone say disgusting and disrespectful things,” he said. “Kanye has an awful long history of him doing and saying distasteful things: He’s not only attacked other marginalized groups, he associated himself with controversial figures and exhibited anti-Black behavior by saying slavery was a choice.”

Given the recency of Bundy’s diagnosis, he said he’s constantly worrying about how he’s being perceived by people: Do they enjoy his company? Is he coming across wrong? Hearing the way people talk about bipolar disorder in relation to West “is not helping” ease his concerns.

What bipolar disorder can do is lower your inhibitions

“Having a mental illness or mental illness disorder diagnoses does not excuse someone from expressing bigoted remarks,” said Chase Anderson, an assistant professor in child and adolescent psychiatry at the University of California San Francisco.

Mental health professionals utilize what is known as the Diagnostics and Statistics Manual (DSM) in order to diagnose mental health disorders. If you look within the DSM, now on its fifth version, none of the criteria for any mental illness diagnosis mention expressing racist or bigoted ideology as part of the diagnosis, Anderson said.

Bipolar disorder is episodic, with periods of mania (as well as depressive lows) that can last days or even weeks and periods where things are stable, mood wise.

When mental health professionals think about bipolar affective disorder ― which is classified by the manic symptoms ― there are often seven main symptoms that they see in those episodes, Anderson said.

There’s an acronym for the symptoms: DIGFAST. D stands for distractibility, I for irritability, G for grandiosity/grandiose thinking, F for flight of ideas, A for increased activities (such as increased spending or sexual encounters), S for sleep (which decreases in a manic episode while the person still feels extremely energized), and T for talkativeness (people can have what is known as rapid or pressured speech).

Grandiosity is one of the most hallmark symptoms of the illness.

“This means the person may think they have godlike powers, they are in fact a god, are invulnerable, or exaggerating one’s accomplishments,” Anderson said. “There is often a heightened sense of self and one’s abilities, which often is not fully grounded in reality and the person’s actual capabilities.”

Feeling invulnerable and especially talkative could lead to lowered inhibitions and could easily play out in something like ill-advised social media posts, even ones that reveal our inner biases. Most people either work through these biases or have a “checkpoint” (or “filter”) in their mind where these biased thoughts don’t come forth.

“In certain mental illnesses, that ‘checkpoint’ is not there during certain periods, like a manic episode, which might account for prejudiced or misogynistic commentary,” Anderson said. “Your thinking is a bit more disorganized and not as calculated.”

In other words, prejudiced thinking is not caused by the illness ― just the lack of filter.

I need as many psychiatrists as possible on this bird app to make it clear that Kanye’s anti-Blackness has nothing to do with his bipolar disorder.

Lucie Fitzgibbon, a 34-year-old from New Orleans, Louisiana, is familiar with the complicated, disorganized thoughts that come with manic episodes. She has dealt with rapid cycling, which is when a person with bipolar disorder experiences four or more episodes of mania or depression in one year.

Fitzgibbon was diagnosed with bipolar II in the spring of 2012, at age 22. Now that she’s on the proper medication and in therapy, she doesn’t experience episodes with extreme frequency. She told HuffPost she wonders why someone who can afford the best mental health care that money can buy chooses to forgo medication. (When West appeared on “My Next Guest Needs No Introduction with Letterman,” he mentioned that he chooses not to take medication for his bipolar disorder, in part because it hampers his creative process ― which experts strongly warn against doing.)

“I remember him saying that he was not condoning or encouraging other people to do the same in that interview, which I appreciated him saying, but at the same time, it’s also just a super dangerous way to be living your life,” Fitzgibbon said.

While Fitzgibbon can’t relate to West’s takes, she deeply relates to grandiosity.

“When I’ve been manic, I’ve gotten myself into dangerous and unhealthy situations that could have ended up being way worse than they were,” she said. “The shitty part was that it’s basically the only time I have any sense of confidence.”

In a manic state, Fitzgibbon said she felt like the “smartest, sexiest, funniest, most interesting woman in the world.”

In a manic state, overposting online makes a lot of sense, Fitzgibbon said.

“The most severe time I was cycling through a mania, I was hyperfocused on this guy I worked with, and I was updating my Facebook status constantly because I guess I just thought everyone must want to know about it,” she said, never mind that she and her work crush weren’t even friends on Facebook.

“I never used his name and he didn’t know about it, but I also didn’t have millions of people reading it like Kanye,” she said.

West’s lack of remorse in the aftermath of his outbursts is one of the reasons psychiatrist Dr. Sulman Aziz Mirza thinks there’s much more to the story than just complications of a mental health condition.

“With the Kanye situation, there is no regret, there is no going back, there is no ‘Oh my goodness, I’ve made a terrible mistake,’” Mirza told HuffPost. “There’s none of the guilt that we often see when someone with bipolar comes back to their baseline.”

When patients have been confronted with their actions, guilt is almost always the first reaction, said Mirza, who has a private practice in Northern Virginia and a presence on social media. (He posted a TikTok explaining why he doesn’t think West’s opinions should be linked to bipolar disorder.)

I’m a psychiatrist. Kanye is antiblack and an antisemite. It’s not a symptom of his bipolar disorder. It’s who he is.
Cc @uche_blackstock pic.twitter.com/coxBClXfS3

At this point, West’s more extreme statements seem to be par for the course for the rapper, the psychiatrist said.

For those with bipolar disorder who are watching West’s behavior and ensuing media coverage and feeling uncomfortable because of it, he and Anderson had some advice.

“It is always OK and often right to step away from social media, especially with how we often lose nuance when posting online,” Anderson said.

“I would also remind people who feel triggered that we have a long way to go in terms of how we discuss mental illness overall in America and the world, and it is OK to not engage when those conversations are triggering,” he said. “You deserve to maintain your internal sense of peace.”

“I am a believer that while mental illness can be at times an explanation for behaviors, we are all ultimately still responsible for our actions, with appropriate consequences to those actions,” the psychiatrist said.

Need help with substance use disorder or mental health issues? In the U.S., call 800-662-HELP (4357) for the SAMHSA National Helpline.

After A Year, Miami Man Is Arrested For Murder Of Woman Who Attempted To Catch Him With Stripper
Jimmy Kimmel Blasts Hitler Fan Ye’s ‘Complete Insanity’ On Alex Jones Podcast
Audie Cornish On Leaving ‘All Things Considered,’ Her New Podcast And The Art Of Interviewing
Lil Cam 5th Arrested, Could Houston Police Be One Step Closer To Finding Out Who Killed Takeoff?
Black Mayors Will Soon Lead 5 Of America’s 10 Largest Cities