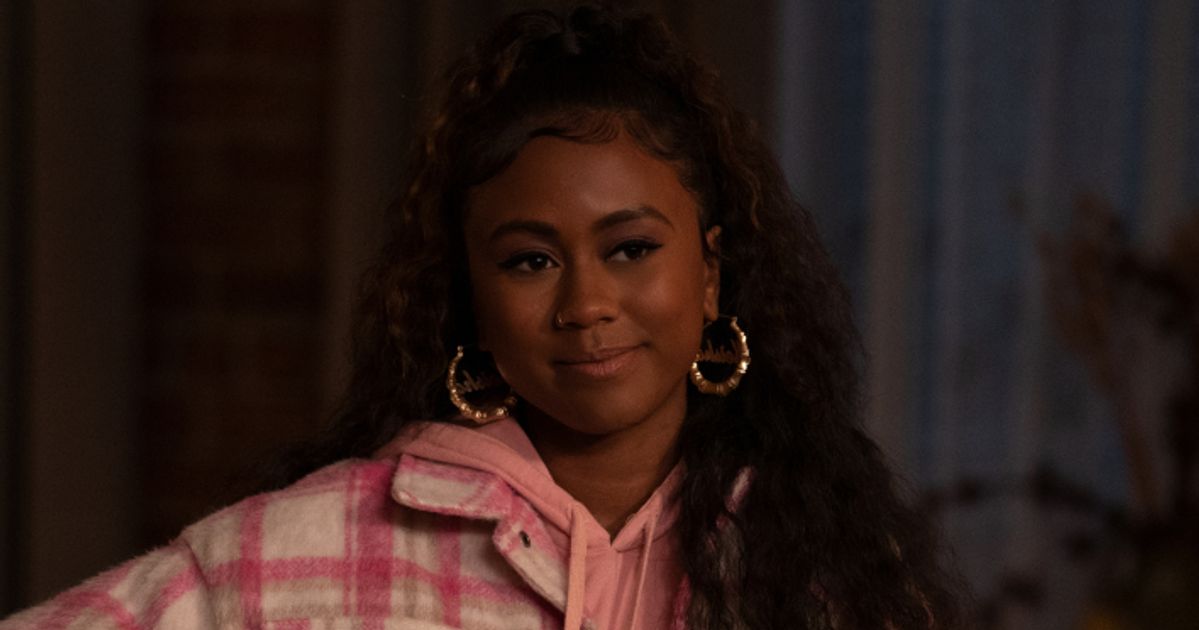 Unlike her character Keisha McCalla on “All American: Homecoming,” Netta Walker describes herself as someone who was “not a good kid.”

But then her sophomore drama teacher, Shirley Kirby, reined her in. The instructor acknowledged her pitfalls but, most importantly, her potential as well. The actor said that Kirby was one of the first educators to nurture her strengths and teach her that she was indeed capable of achievement.

“I was spiraling out of control. I was not having good grades. I was getting into things that I shouldn’t be involved in,” Walker said. “Without her looking at me and harnessing the potential she saw in me, I don’t think that I would have been able to journey into acting the way that I did.”

So Walker started performing in plays for Kirby during the summer — and she loved it. Following her first community theater show — an adaptation of the 1980 comedy film “9 to 5” — she caught the acting bug. Over a decade later, Walker, 26, has landed her first regular role in a series with Nkechi Okoro Carroll’s “All American: Homecoming.” Through her character, Walker is a vessel for nuanced representation of Black intersectional identity and what ownership of young adulthood entails.

“Keisha is filling out even more of herself with what she already knows and allowing herself the space to grow within that knowledge. She’s ever expanding, and she continues to stand up for what she believes is right,” Walker said.

“She has a very strong moral compass. And even when she is self-sabotaging, she takes the moment to look back and say, ‘Well, what I just did is wrong, and I have to rectify it.’ There’s a lot of things that are going on with Keisha in season two that are going to be trying, but she’s working through as much as she can with what tools she has.”

The CW series, which saw its second season debut Monday, follows tennis hopeful and teen mother Simone Hicks at the fictional Bringston University, a historically Black school in Atlanta, as she navigates an all-new environment far from the familiarity of her California roots. The show’s backdoor pilot in the original “All American” series introduced Keisha as a headstrong pre-med student who’s queer, Black and Filipina, with a burgeoning creative side. Walker was drawn to her instantly.

“I was very much her in college, especially going to school for musical theater. My mom wanted me to be a nurse, which is hysterical,” chuckled Walker from her Chicago apartment. Keisha, too, had to assert that she ”doesn’t want to do pre-med and she wants to pursue this thing that she loves,” Walker said, adding that in real life, “that was a really hard conversation to have with my parents.”

Keisha, the daughter of the university president, is fiercely protective of the institution and her loved ones. Searingly honest, direct and unafraid to talk with her peers about themselves, the character is the big sister on campus that everyone wishes they had. However, following the loss of her mother, she struggles with vulnerability and occasionally self-sabotages her own romantic relationships. Nonetheless, Walker fell in love with who Keisha could be.

“There’s a lot of alignment with Keisha and my real life,” Walker said. “It’s been really special, and [Carroll, the show’s creator] has been a really fantastic person to work with. She is everything that this industry should be aspiring to.”

Walker was raised by her Filipina mother and Black father in western Jacksonville, Florida. With three brothers, Walker is the youngest of four. Along with her siblings, Walker attended historically Black schools in the city — James Weldon Johnson College Preparatory Middle School and Stanton College Preparatory School — and her mother imparted Filipino traditions and cuisine to them. The actor described it as a beautiful collision of cultures.

“[My mother] brought her culture with her. She made sure that we would have the same food, we would learn how to eat with our hands, we were going to be Filipino kids. But we were raised in Southern Black culture,” Walker said.

“My dad was one of the first kids sent to an all-white school in Jacksonville, and my grandparents fought for desegregation in the South. I was raised in a culture that was actively about fighting for what’s right. And if you don’t stand up for what’s right, you’re just as wrong.”

After the local production of “9 to 5,” Walker knew she wanted to pursue theater and attended a conservatory in Chicago. Despite dropping out after three years — “because there were just a lot of varying differences in teaching,” she said — Walker would eventually find her way back to her artistic home. While speaking to HuffPost, she was visiting nearby Glencoe, Illinois, to support friends in a production of “Tiger Style!” featuring an all-Asian cast.

“I stayed here because I love the theater scene so much. There’s just so much to learn. There’s like an endless supply of talent, experience and mastery at work here all the time. That’s why I still live here,” Walker said. “I feel inspired every single time I come back.”

Moving out to Los Angeles is no small feat, but to portray Keisha, Walker was more than happy to make the leap. It means the world to her, she said, to be part of a sitcom that showcases and honors modern life at historically Black colleges and universities — or HBCUs — and other institutions. As a child, she watched one of her older brothers play trombone in a marching band under the Friday night lights at their high school, while another played NCAA football at Alcorn State University.

“On the west side [of Jacksonville], everyone from there goes to an HBCU. We’d go to Bethune-Cookman’s homecoming all the time, because it was right there,” Walker said, referring to the university in Daytona Beach.

“I was just so used to seeing the culture, and I loved seeing the majorettes. It’s been really special to get to dive into a show that is honoring that and actively making sure that we honor it respectfully and correctly,” she continued, wearing a vintage Howard University Bison football sweatshirt and wire-rimmed glasses.

Another point of pride for Walker is propelling narratives that decenter whiteness and heteronormativity. Often, depictions of biracial identity and interracial dating in media focus on whiteness, when in reality, being multiple races implies a multitude of possibilities. For Walker, she said that it was important to show the “intersectionalities between brown people in general that we don’t get to see much on TV.”

In the first season of “All American: Homecoming,” Keisha grieves as her late mother’s birthday approaches. The character states that in Filipino culture, it’s customary to visit a deceased person’s grave on their birthday and celebrate them. At odds with her father at the time, Keisha is despondent about not visiting her mother’s tombstone — yet her friends surprise her with a Kamayan feast, a traditional Filipino meal, honoring her late parent.

“That was so special, I can’t believe they actually let that happen. That episode with Keisha’s mom was so important to me because you’re in a space with fully Black people, and they’re holding you in a moment that is so vulnerable, letting you know that you’re loved and cared for,” Walker said. “When I was 16, I went to the Philippines with my parents. And that was a huge moment for me, which is what was a big inspiration for that episode.”

“That was the first time I’d ever been to the Philippines, and my grandmother’s birthday was coming up,” she continued. “My dad, my mom, her 11 brothers and sisters, and all of the nieces went to my grandmother’s grave and had a Kamayan feast, which is what you see featured in that episode of the show. You put out the giant banana leaves, you eat with your hands, everyone brings food and you just celebrate the person at their grave. It’s like having dinner with that person.

“That’s one of my fondest memories of my teen years because I had never gotten to see my mom so deeply immersed in her culture in that way. I’d only seen her as my mom.”

Walker has received an abundance of messages from biracial Black Filipino youths, applauding her portrayal of Keisha and expressing gratitude for making them feel seen. “The thing about Filipino culture,” said Walker, “is the pride runs very deep. We really rock for anyone who’s Filipino. Those messages have been really, really emotional.”

Alongside Rhoyle Ivy King’s portrayal of Nate, fans have lauded Walker’s representation of Black femmes who are bisexual or pansexual. Walker said that one of the reasons she values “All American: Homecoming” so much is that she’s seeing a younger version of herself watch and realize that the world is bigger than the prejudices she may have faced.

“If I got to see this when I was 13 and questioning everything about myself, I would feel seen and held. Any day that I get to tell this story has been very special. I’m pan or bi; I literally date whoever I love. I love that showcasing [Keisha’s ex-girlfriend] is just a passing thing,” said Walker.

“I don’t feel like we’ve seen a show about HBCUs where this has been so heavily appreciated. It never feels like it’s a moment. It doesn’t feel like it’s being made fun of or it’s being criticized. They can just exist in this world and be accepted by everyone, which we know in the real-world sometimes is not true.”

To Walker, “All American: Homecoming” is a gift. She said that nothing compares with her visits home, where she dishes with her Jacksonville-born grandfather and extended family about moments on the show that feel authentic to them. Though her father died of cancer in 2017, Walker knows he would be overjoyed that she is on a series so deeply tied to preserving Black history and the legacy of Black institutions.

“I think he’d be proud. I feel like his first response would be, ‘All that money I spent [on schooling] paid off!’” she said, followed by a hearty laugh. “He was a very smart and cunning man. He would be really proud of this, which I think is cool. There’s some plays I’ve done where he’d be like, ‘You really chose that one, huh?’ But I think he would be pretty ecstatic over it, especially the tribute to my mom.”

As her career blossoms, Walker hopes to become a multihyphenate entertainer and, one day, make her directorial or producing debut like “All American” star Daniel Ezra. For now, she’s taking meetings, sharpening her writing and diving more into the indie world.

Her goal? To launch a company in Chicago that produces work written by local playwrights and artists. As for the character Keisha, Walker hopes that she’ll learn to stand in her power more during the second season, not be afraid to trust her gut, and extend grace to herself.

‘All American: Homecoming’ Star Geffri Maya Is Leaning Into Her Purpose

Rhoyle Ivy King Is Portraying The Character He Needed Growing Up

DJ Vlad Threatens To ‘Choose Violence’ After Saweetie’s Camp Declines Interview On Blogger’s Platform
How One Woman Found Out Her Friend Was A Serial Killer, And She Was Next On His Hit List
Shanquella Robinson: Mexican Authorities Request Extradition Of ‘Friend’ Allegedly Responsible For Death
Bling Bling: 5 Songs From Cash Money’s B.G. That Every Gen-Zer Should Get Familiar With
Will Smith Understands If You Don’t Want To See His Latest Film