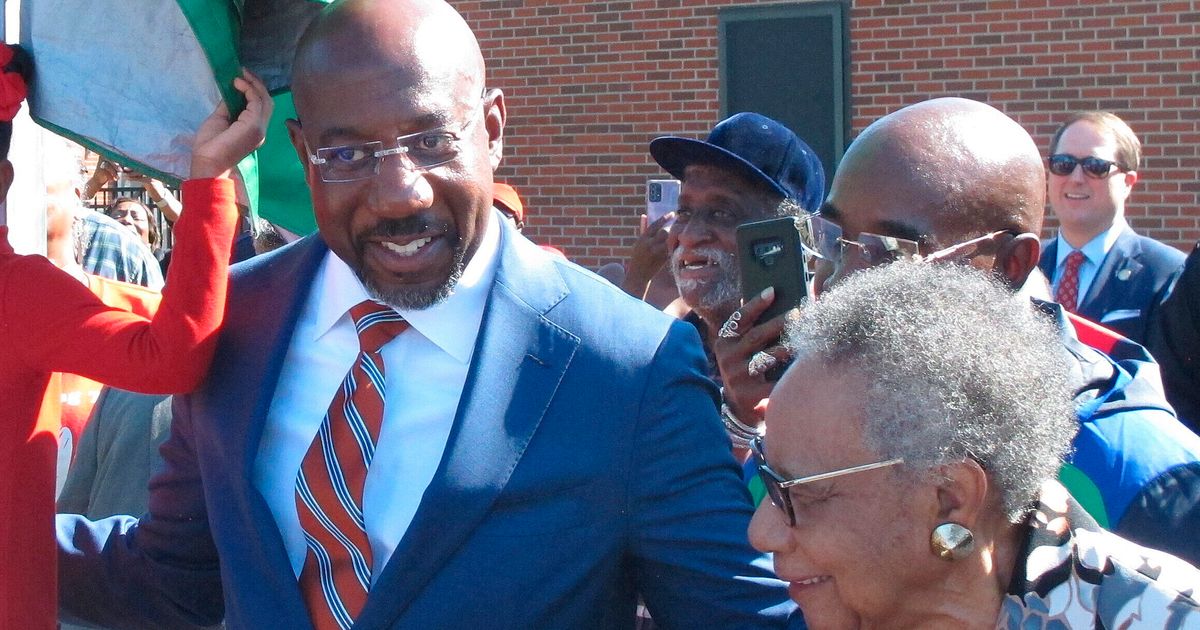 MACON, Ga. ― At a conference of hundreds of Black church leaders here last week, the message from the pastors and the Georgia political candidates who stopped by to press the flesh sounded awfully similar: Vote in November like your lives depend on it.

“We determine who wins this election,” warned Bishop Reginald Thomas Jackson, the head of the African Methodist Episcopal Church in Georgia, which hosted the two-day bipartisan candidate forum on Oct. 6 and 7. “This election is going to be decided by who turns out to vote. If we do not turn out to vote, folk who do not represent our best interests will win this election.”

The 100,000-member congregation, Jackson said, should focus on getting “anyone who’s 18 and can breathe” to vote in November.

Two years ago, Black voters in Georgia helped Democrats flip two Senate seats in a special runoff election and win control of the U.S. Senate. As a result of those stunning electoral victories, the party chalked up an impressive list of legislative achievements, including COVID-19 financial relief, monthly child allowance, drug pricing reforms and the biggest green energy investments in U.S. history.

Now, less than a month from the 2022 midterms, fears are growing among top Democrats that their gains could be reversed if vulnerable incumbent Sen. Raphael Warnock (D-Ga.) loses his bid for a full six-year term. With GOP Senate candidates floundering elsewhere in the country, a victory for the party in Georgia could hand them a narrow edge in the Senate next year.

“Just as a voter, I can tell you I am very concerned at the lack of enthusiasm in [Georgia] right now,” Keisha Lance Bottoms, a senior adviser to President Joe Biden and former mayor of Atlanta, said last week in an interview on SiriusXM. “I don’t feel and see the enthusiasm that I think voters across Georgia should have right now. And I know that oftentimes in midterm elections, people don’t turn out to vote. I hope that won’t be the case this year in Georgia.”

Warnock currently holds a small lead in the polls over his Republican challenger, former NFL star Herschel Walker, whose campaign has been rocked by revelations that he urged a former girlfriend to get an abortion. But the tough economic environment right now, coupled with the fact that the incumbent president’s party typically loses seats during midterm elections, means Republicans could score a victory anyway.

According to a poll released Tuesday by Emerson College, Warnock leads Walker 48% to 46%, with 4% of Georgia voters undecided. The slight advantage for Warnock has been found in other surveys of the race. The Emerson College poll also found that the gender gap in the race has shifted in the Democrats’ favor since the summer: Walker’s lead with women has grown from 5 points in August to 9 points in October.

Still, Republicans are feeling optimistic about their chances of keeping Warnock’s vote share in November below 50%, which would trigger another runoff election. The Walker bombshells don’t seem to have shaken his loyal supporters: Many Republican voters in Georgia say they’re willing to overlook the fact that Walker once paid for an abortion if it means split-party control in Washington.

On Tuesday, National Republican Senatorial Committee chairman Rick Scott (R-Fla.) and Sen. Tom Cotton (R-Ark.) made a show of unity by appearing on stage with Walker at a campaign rally in Carrolton, Georgia.

“People get tired of ads and the lies they tell about Herschel Walker,” Cotton said at the event. “The most important ad is all of you talking to your friends and family, saying simply, ‘I’m for Herschel. Here’s why.’”

Warnock, an ordained minister, became the first Black senator from Georgia in 2021 by running up the margins in swing counties near Atlanta that have trended blue in recent elections, and by outperforming in rural Republican strongholds like those in the middle Georgia area of Macon. The incumbent senator will need to replicate that kind of performance to win again, a harder task this time around.

“If we don’t get the vote out in the southern part of the state, we’re done,” Jackson, the AME bishop, said.

Georgia Secretary of State Brad Raffensperger predicted “really strong” voter turnout, approaching near-presidential levels, in this year’s midterms. Raffensperger, who is seeking another term in office, was the only Republican candidate to appear before the predominantly Black audience at the AME event last week.

One new challenge for grassroots groups in Georgia this year is the fact that some Republican counties in the state have eliminated Sunday early voting. That means so-called “Souls to the Polls” events that were traditionally held after Sunday church services are now being held on Friday or Saturday, when church attendance isn’t as robust. Democrats have accused Republicans of making such changes, including putting limits on the availability of ballot drop boxes, in order to suppress the minority vote in Georgia.

James Gaymon, the voter turnout director at AME’s 6th District of Georgia, told HuffPost that some pastors didn’t know about the elimination of Sunday early voting in their counties before getting in touch with him this month. Still, Gaymon said he feels bullish about his organization’s ability to get people to the polls this year, citing additional resources and better preparedness.

After A Year, Miami Man Is Arrested For Murder Of Woman Who Attempted To Catch Him With Stripper
Joe Biden Can Confirm Even More Judges If Democrats Win Georgia’s Senate Race
5 Things To Know About Miguel Nunez Of ‘The Family Business’
Odell Beckham Jr. Escorted Off A Plane In Miami After Dispute With Flight Crew
Trevor Noah Reveals His Exit Announcement Was A Total Shock, Even To His Own Team