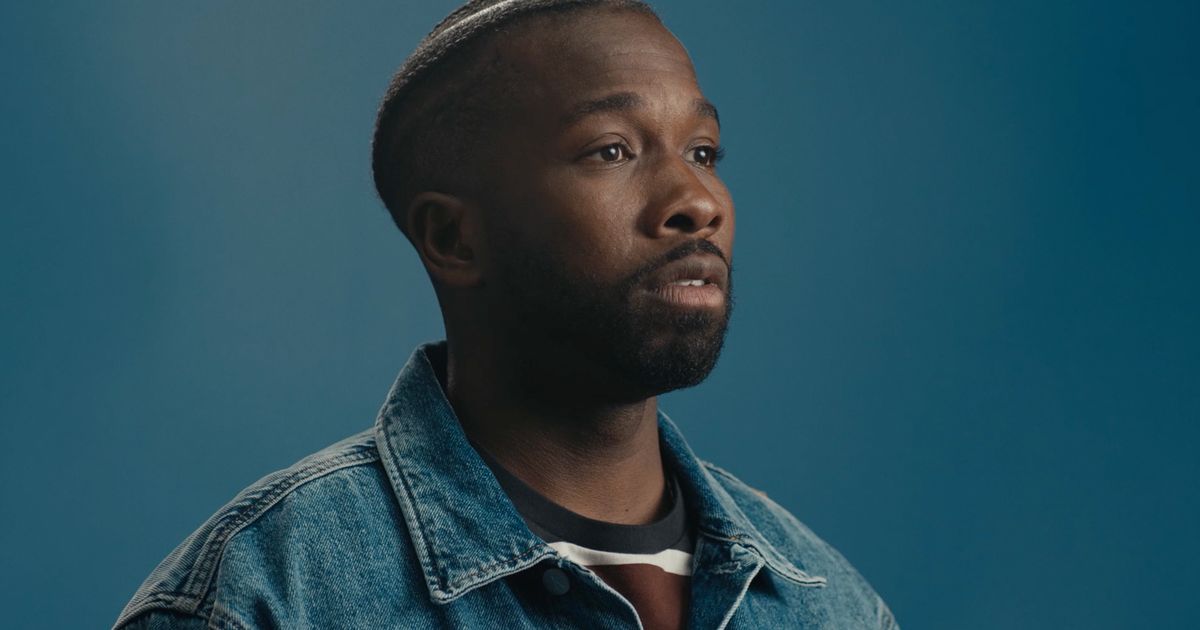 There’s a saying that I’ve heard a handful of times while processing death: “What is grief, if not love persevering?” Sometimes in the midst of mourning, it makes sense; other times, it doesn’t. But the clarity that comes from talking with “Insecure” alum Jean Elie on a sunny New York City day helps bring the wisdom of the quote full circle.

He’s in his hotel room, battling some pretty bad Wi-Fi and preparing to go see the Times Square billboard promoting his new show, “Send Help.” The series, which streams on AllBlk, is a labor of love between Elie and co-showrunner Mike Gauyo. For Elie, who said the show has been “sitting on my heart for a very long time,” it is both a career milestone and a source of healing.

“Send Help” has been heralded for showing the nuances and authenticities of first-generation Haitian American life, so much so that it helped earn Elie the Haiti International Film Festival’s 2022 Best TV Series Selection honor. But more than anything, the show is an honest love letter to his late brother, Steve Anthony St. Louis.

St. Louis, who was 30 when he was fatally shot outside of a club in 2009, helped raise Elie in the Brockton, Massachusetts, home where they grew up. He was an artist and a singer, which inspired Elie to sing and draw as well. He helped Elie with his homework and showed him how to talk to girls. He lovingly taught him the harsh realities of life. And as much as he protected and affirmed Elie, he made him laugh, too.

“He made sure I knew how to stand on my own two feet and be my own man,” Elie said. “He encouraged anything and everything I did. So to the point where out here, I have a lot of support and I have a lot of people, but nothing compares to him seeing what’s happening in life and what’s going on out here.”

The person who pulled the trigger had sat at the dinner table with Elie and his family for Thanksgiving one year, a critical part of the storyline in “Send Help.” Elie isolated himself after delivering the news to his parents. He went to his home in Rhode Island and locked himself in a room for a few days.

In “Send Help,” the character Fritz Jean-Baptiste, played by Elie, is loosely based on how his own life changed after St. Louis’ passing. Fritz is an actor in a popular series who gets a bit too comfortable in his career. Life begins to hit him hard when his show gets canceled and he’s forced to deal with his repressed emotions, mental health issues and avoidant behavior, all while dating and searching for new work.

His late brother Simp, played by Amin Joseph of “Snowfall,” shows up as a witty apparition throughout the first season. The show also features Courtney Taylor, Catfish Jean, Karina Bonnefil, Ana Bowen and Karen Obilom, as well as an appearance from Issa Rae.

“The thing that tethers Fritz and I together is a loss of an older brother. And after my brother passed away, it was just a matter of trying to find a way to speak about him in a way that didn’t feel like I’m just milking that story,” Elie said of the show, which he started to conceptualize in 2010 shortly after his move to Los Angeles.

Elie said it was hard for him to open up about his brother for a long time. But watching other shows that explore the impact of gun violence made him feel seen. He credits the first season of “The Chi,” especially.

“I didn’t feel comfortable telling that story. So creating a character like Fritz to have that story and tell that story, in a unique way that’s also relatable to other people, meant a lot to me.”

“Send Help” is the first time that Elie has opened up publicly about his brother’s death. It explores the emotional turmoil that the death of Simp caused for Fritz and their family several years later, including their mother. It homes in on ways that Fritz finds healing, inspired by Elie’s own journey — which started out as him burying himself in work.

“[Fritz] was able to hide in plain sight through his art as an actor, but not really dealing with what’s really going on inside of him,” Elie said.

Some of the ways that Fritz copes are a reflection of Elie’s own process. Turning to alcohol, weed and sex to mask the pain became habitual. Elie said he knows that a big part of this is how society generally suppresses Black men’s emotional expression. He realized how toxic that could get for those around him when he ended up getting drunk and fighting a friend after sitting on his anger for so long.

“I felt super bad for it. We’re still friends to this day, and we talk about it. But it was messed up because he didn’t deserve that from me,” Elie said. “And what happens with a lot of Black men — things like that materialized in their relationships. It happens to their partners. It happens to their friends. Or they do it to themselves, where they just start deteriorating themselves.”

Elie began channeling his energy into journaling and leaning on his community more. Through his grieving process, he learned to finally give himself the grace he needed to heal, to let the love he has for his brother persevere.

Throughout the show, we see Simp guide Fritz through his healing journey, especially when he’s under the influence.

“Another way I deal with it is just covering myself with a bunch of friends and family who I love to be around and being there for them, and just channeling my energy into that. Or being there for the people that I love the most, like my niece, my mom, my sisters, and things of that nature — and now my fiancee, which is a whole different ballgame.”

The show is an honest portrayal of the highs, lows and low lows of grief.

Elie said that he still feels his brother — through his writing, through his successes and when he’s with his mother and niece. He celebrates him every June 14 — St. Louis’ birthday — by sipping on his signature drink: Hennessey, Grand Marnier and cranberry juice. The heartbreak is still there, but Elie hopes that his show can offer some solace to other men who may not be able to fully process their grief.

“It’s OK to speak up and speak to a friend, and reach out to somebody else. I want people to know that. And then also it’s OK to be sad, it’s OK to be hurt, but it’s not OK not to speak about it or to find an outlet, whereas you can challenge yourself. So express what it is you’re feeling, because letting it fester inside you is not helpful to you and the people around you. So be kind to yourself always, and be patient.”

Though Elie wouldn’t confirm a second season, he is proud of himself, his team and, of course, his brother for pushing him to create such an honest show.

All seven episodes from the first season of “Send Help” are currently streaming on AllBlk.

37 Holiday Gifts From Black-Owned Brands To Give This Year
Kanye West Posts Half-Naked Elon Musk And Accuses Chris Paul Of Sleeping With His Wife Before Another Twitter Suspension
Jimmy Kimmel Blasts Hitler Fan Ye’s ‘Complete Insanity’ On Alex Jones Podcast
Do I, Or Don’t I Go Home For The Holidays?
Jonathan ‘Hovain’ Hylton, Cherished And Influential Music Industry Leader, Has Passed Away