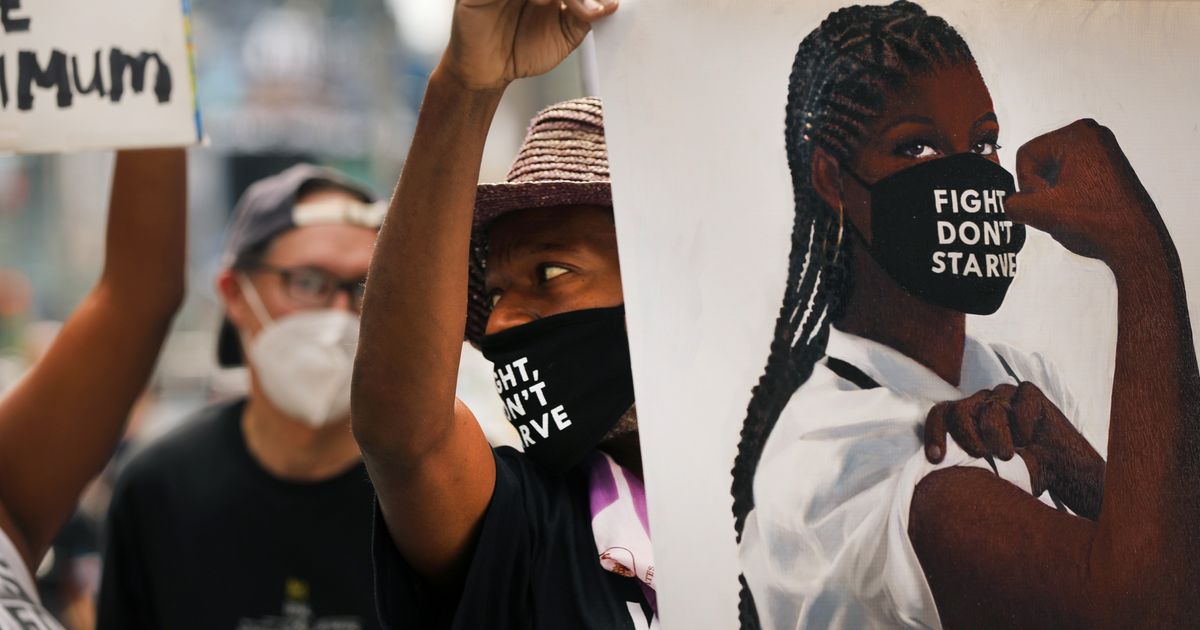 Black Women’s Equal Pay Day is Sept. 21 this year. Last year it arrived on Aug. 3. That’s more than a month later. That means that to date, Black women now make 58 cents to every dollar white men make. In 2021, it was 63 cents.

The reason for the new number and date, which marks how much longer it takes Black women to earn as much money as non-Hispanic white men made in the previous year, isn’t as cut-and-dried as you’d assume. But it’s still pretty bad.

Yes, the wage gap has widened because COVID-19 led to economic conditions worsening for the demographic overall. In 2021, reports stated that the unemployment rate reached a high of 16.6%, and though that number eventually fell, it was still 1.7 times higher than Black women’s unemployment rate before the pandemic. That is coupled with the fact that the wealth gap for Black women closed only very slightly over the course of 30 years and that employers lagged on their commitments to making the workplace more equitable.

But there also is a methodology change to account for the 5 cent decrease.

Jasmine Tucker, the National Women’s Law Center’s director and wage gap expert, said typically equal pay dates are based on the experiences of full-time workers. But because of the universal shift brought on by the events of 2020, community advocates pushed to make sure part-time and gig workers were included. That was especially important because many people who maintained jobs that entire year were in higher paying positions and were somewhat insulated from the sweeping unemployment that hit the country.

But she warned against a false sense of optimism. “I think there’s a myth that the recession is over, unemployment rates are low, job growth is up, that everyone’s fine, everyone’s OK, and that’s not the case,” she continued. “The data shows that people and women and women of color and Black women are not doing well.”

Delia Coleman, the deputy director of the nonprofit Equal Rights Advocates explained that Black women are historically among the least paid for some of the same work white men do. Added to that are the lack of pregnancy leave and accommodations, caregiver discrimination and being forced out of work “depressing our lifetime earnings.”

“Now, add the pandemic to this, that has additionally forced hundreds of thousands of Black women out of the workforce because of lack of child care,” Coleman continued. “Black women aren’t returning to work at the same rates that other demographics are. It is slower for us to return to full-time work. We are returning on a part-time basis, again, because of child care but, also again, because of employers [saying], ‘You can’t get your old shift back. You can’t get your old schedule back.’ Black women are putting together their working schedules the best that they can.”

Though a few cents may not sound like much, it can mean everything when it adds up. Throughout the course of a 40-year career, Black women lose out on an estimated $946,120 on average. That could make a big difference for Black women and their families, especially since they are predominantly the breadwinners.

The implications of that go beyond just the number on a paycheck, Coleman noted.

The pressure of those financial burdens can lead to serious health issues as well. Linda Goler Blount, president and CEO of Black Women’s Health Initiative, told HuffPost that the stress from having to work longer to earn a livable wage is associated with a higher risk for diabetes, hypertension, heart disease and emotional distress.

“We know pre-COVID, about 50,000 Black women died from avoidable causes because of poverty, lack of access to health care, lack of access to contraception care and a number of things,” Blount noted. “Now we will see that go up. Some estimates are that the poverty rate could increase by another 10%. If that happens, then you’re looking at probably another 10,000 to 15,000 avoidable deaths every year.”

Black women made up a good chunk of the essential workers who made it possible for the economy (and, more important, people) to survive 2020. But the urgency to uplift them as critical for the workforce isn’t as urgent as it was two years ago.

Tucker notes that even if the wage gap all of a sudden closed, it wouldn’t make up for the generational wages Black women have already lost.

“They’re never going to get that money back,” Tucker said. “Because so much wealth is passed through families. And so, while we continue to pay white men and white women more, that wealth continues to be concentrated among white families, and Black families will never see that. Even if we close it right now, it’s just going to take a really long time to undo the damage that this has done. If it can ever be, if this can ever be undone.”

“Black women don’t need to do it,” she said, pointing to the many times Black women have had to put on their Superwoman cape for this country. The onus should fall on employers and policymakers to make real change.

She pointed specifically to two congressional bills that could help address that: the Raise the Wage Act, which would increase the federal minimum wage to $15 an hour by 2025, and the Paycheck Fairness Act, which would ban wage discrimination on the basis of sex and gender. Coleman implored Congress to pass these two bills and treat the wage gap as an urgent issue because, after 2020, many Black women are burned out.

“There are so many communities that rely on the labor, the brilliance, the joy of Black women,” she said. “If Black women aren’t able to make it, those communities falter. It is imperative that we demand pay equity for Black women because so many of us are leading our communities, organizing against police violence, organizing against systemic anti-Black racism, including in the workplace. We are pushing for change in so many different ways. That needs to be recognized in how we are compensated.”