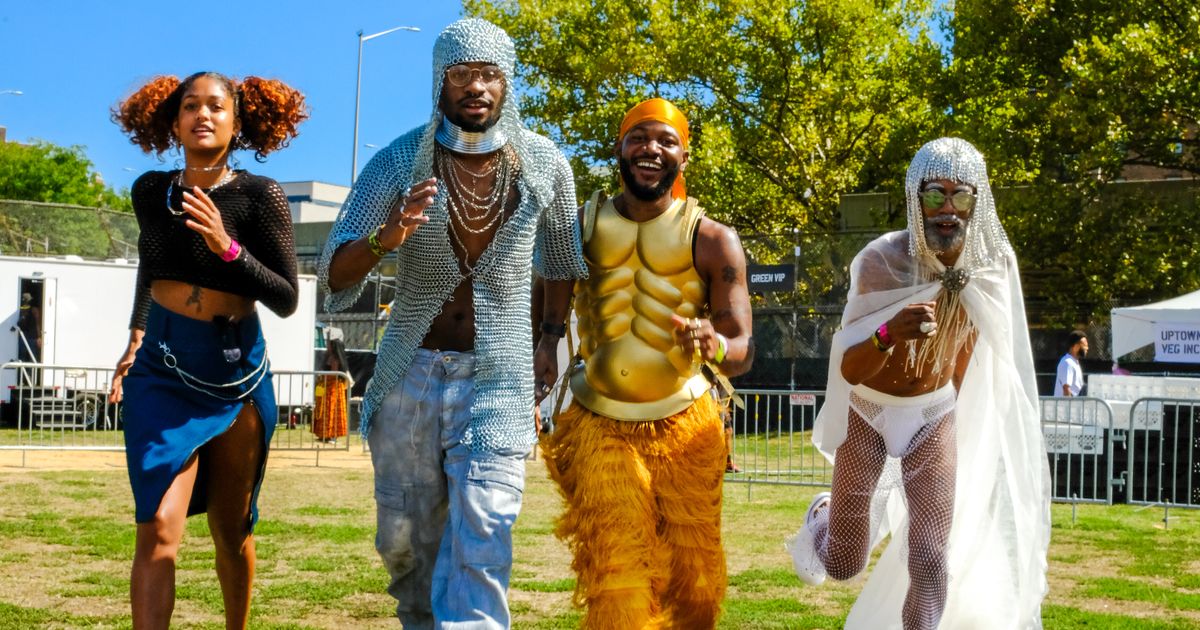 NEW YORK — Isadora Lopez first learned about Afropunk in 2017, when she was a student at the Savannah College of Art And Design in Georgia. The Manhattan native was entranced by the images she found online while working on a class project.

“I was doing a hair dye project for this graphic design class, and I saw this girl with really curly hair. I was just very attracted to that aesthetic, then I started looking at more about Afropunk,” Lopez said. “I was like, ‘Oh, I have to go,’ and it just took me a while to get here. But I’m finally here.”

Five years later, she and her partner trekked from Connecticut to Commodore Barry Park in Brooklyn, New York, for the festival. Clad in a form-fitting bustier, angelic wings and green braids, Lopez’s outfit was inspired by her personal hair journey — and by flipping Medusa from monster to a goddess.

“I’ve always had a very close connection with Medusa, going through like my hair journey from relaxing and straightening it to embracing my curly hair and loving myself for that. Hair is a big, important thing when it comes to confidence and creativity,” she said.

“One thing that comes to mind is that song ‘Power’ from ‘Black Is King,’ when Tierra Whack says, ‘Refer to me as a goddess. I’m tired of being modest.’ That’s what I think of when I think of this space,” she added. “No modesty, just be your true self and celebrate your culture.”

The last Afropunk Music Festival was in Brooklyn in 2019. When the coronavirus wreaked havoc on the nation, the festival was paused. For the first time in three years, the two-day event returned to the borough on Saturday and Sunday to celebrate community and unapologetic Black expression.

A breeding ground for creativity, Afropunk has a simple policy: No sexism, no racism, no ableism, no ageism, no homophobia, no fatphobia, no transphobia and no hatefulness. For nonbinary content creator Shahem Mclaurin, aka Dr. Durag online, Afropunk presents an opportunity to connect with other pro-Black creatives, such as fellow content creator Christina Brown.

“It is so nice to have other creatives who just get it,” Mclaurin said. “I feel so safe, and I think having more spaces where we can openly be our loud, creative, very queer, very Black selves, it’s just necessary. I’ve been to other music festivals, and this is the only place where I feel like I can be very Black and queer as fuck and without having to apologize for it.”

Mclaurin, a 28-year-old therapist and social worker, did not come alone. Their friends Brown, Jamal Ali and Yah-Yah Lucas sought to portray the elements with their festival attire. While Lucas wore chainmail reminiscent of a knight in shining armor, Mclaurin embodied the sun in fringed yellow pants, a gold breastplate, and of course, their signature durag.

Dontaiz, a cosplayer from Atlanta, said the festival serves as an opportunity for him to connect with other cosplayers and members of the “alt-Black community.” An anime fan, Dontaiz said his outfit was inspired by two series: “Demon Slayer” and “JoJo’s Bizarre Adventure.” The first Afropunk Music Festival he attended was in 2018, and that, he said, was a learning experience.

“I only know so many different types of Black people across the diaspora,” the 29-year-old said. “That was the first time I ever heard of Afrobeats, reggaeton, and other music besides ‘No Holding Back’ by Wayne Wonder. I’m so glad Afropunk Brooklyn is back, and I’m most excited to see Burna Boy.”

While Gold’s collaborators, such as British funk and R&B artist NAO, had previously performed at Afropunk festivals, this was his first appearance.

“I have to say that I’ve been looking forward to performing at this festival because I’ve seen it a lot,” said the singer-songwriter. “I’m really honored that it’s my first time and I’m doing it on the grand stage as well. I don’t think I’ve been in my house longer than a month because I just released the album, and I’ve been everywhere. It feels good to be going to different places with my music.”

The Lagos-raised artist released his fourth studio album, “Catch Me If You Can,” in February. With two Nigerian artists leading the charge at Afropunk, Gold said he’s long awaited the amplification of Afrobeats in mainstream music.

“It’s, like, about time,” he said. “It should have happened a long time ago. We make the best music, and I’m not even capping. It’s just facts, so I’m happy that the world is finally embracing it. It’s nice to see a lot of Afrobeats on this stage. I mean, it just ties in perfectly.”

While Afrobeats was the main attraction, for attendees such as Sisha Freud, being in community was the highlight of the festival. Freud attended with her friends, and their outfits paid homage to their contrasting personalities.

“This is the most welcoming I’ve ever felt in any place, ever. I get to be myself fully, and I get to connect with other people who are expressing themselves in such a fucking beautiful way,” said Freud, a 28-year-old biochemist. “ The first time it was here, it felt like coming home.”

The Most Eye-Catching Looks from Afropunk Brooklyn 2022

AfroPunk Brooklyn Photos Show The Beauty Of Blackness In All Forms

A Festival That Celebrates Black Culture Taught Me How To Belong

Jada Pinkett Smith Explains Why Alpha Males ‘Don’t Pay Attention To Feelings’
‘Interview With The Vampire’ Is Blacker And Gayer Than Ever — And It Feels Just Right
Jada Pinkett Smith Reveals She Had A ‘Disgusting’ Kiss With Rapper Tupac Shakur
Weird Al, Kenan Thompson Among Celebrities Honoring Late Rapper Coolio
Get To Know KenTheMan: 10 Things To Note About The Houston Rap Star