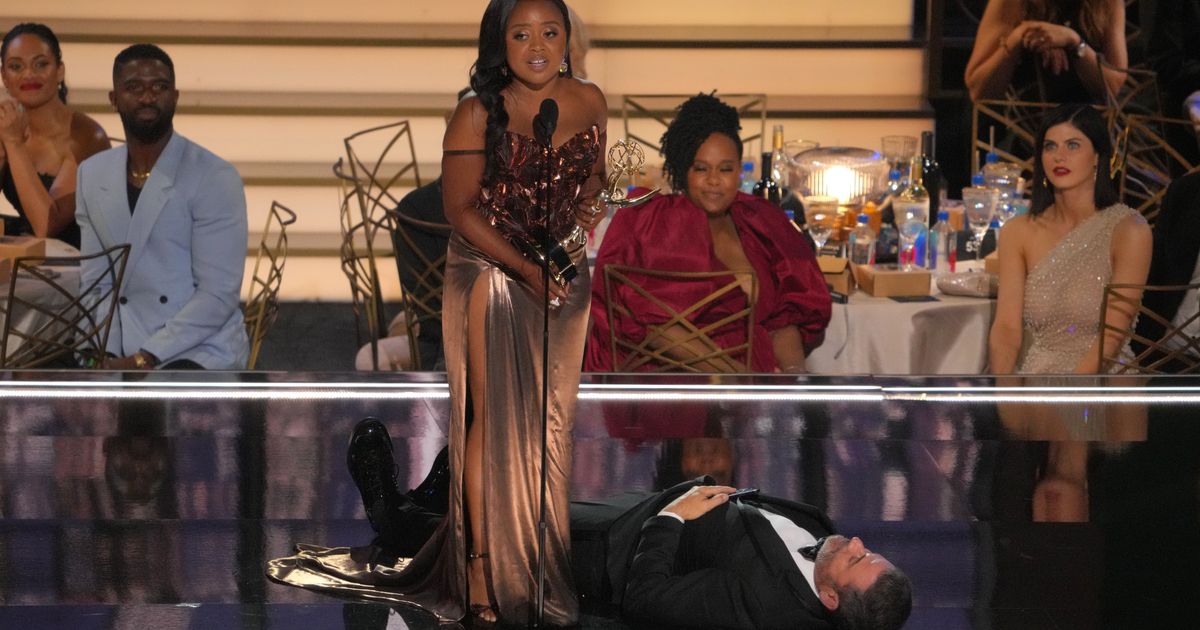 Jimmy Kimmel may be bitter — but he didn’t have to bring Quinta Brunson down with him.

On Sunday, Kimmel and Will Arnett did a bit before announcing the winner of the Outstanding Writing for a Comedy Series Emmy. Basically Arnett dragged Kimmel onto the Emmy ceremony stage by his feet because Kimmel was upset that his talk show, “Jimmy Kimmel Live,” lost the variety talk series Emmy once again to “Last Week Tonight.”

Kimmel remained on the floor, seemingly upset, as Arnett announced that Brunson had won in her category.

As the “Abbott Elementary” creator walked onstage to give her acceptance speech, Kimmel remained on the floor.

“Jimmy, wake up, I won,” Brunson told Kimmel, but he didn’t budge.

funniest or most annoying way to giving an award jimmy kimmel pic.twitter.com/rW5gxuXGle

Kimmel stayed on the floor for the entirety of Brunson’s speech — and had to be dragged off after Brunson was done.

Although some enjoyed that Kimmel fully committed to the bit, more were upset that he stole Brunson’s shine during her big moment.

White male privilege is laying on the ground & expecting a Black woman to just step around you while she accepts her hard-earned award. Fuck Jimmy Kimmel. #Emmys2022

Jimmy Kimmel should have left the stage during Quinta’s speech. Highly disrespectful #Emmys

If #QuintaBrunson stepping over #JimmyKimmel who literally laid in her spotlight on the day she won an Emmy isn’t a metaphor for what it means to be a WOC in a white mans world I don’t know what is.

Jimmy Kimmel is ruining this moment for Quinta Brunson.

She played along with the bit, but that was her moment.

next time jimmy kimmel is on a stage this is gonna be me pic.twitter.com/TBIECt5JYi

yall dragging jimmy kimmel and it’s what he deserves

ABC’s “Abbott Elementary” is a family-friendly sitcom that airs on network television. But what makes this seemingly traditional comedy feel so fresh is that it’s a show created by a Black woman (Brunson) and it stars a predominantly Black cast that doesn’t focus on “talking about being Black all day,” as Brunson told The New York Times in March. She explained to the newspaper that her show is more interested in “these people’s lives.”

“There have been recent sitcoms — ‘Black-ish,’ ‘Fresh Off the Boat’ — really good sitcoms, but my generation was starting to get tired of race as the only focal point,” she said. “The white shows got to just be white, but a lot of the shows with people of color were about the color of the people and not about stories of the people. So ‘Abbott’ also feels like a shift in that way.”

Kimmel’s move also seems disrespectful because Brunson made Emmy history in July when the nominations were announced.

Considering that Brunson won only one of these categories makes Kimmel’s commitment to his bit feel a bit off.

After her speech, while speaking to reporters, Brunson addressed Kimmel lying on the stage during her moment.

“I felt like the bit didn’t bother me that much…. Tomorrow maybe I’ll be mad at him. I’m going to be on his show on Wednesday, so I might punch him in the face.”

Quinta Brunson addressed Jimmy Kimmel laying on stage during her #Emmys acceptance speech: “I felt like the bit didn’t bother me that much…Tomorrow maybe I’ll be mad at him. I’m going to be on his show on Wednesday, so I might punch him in the face.” https://t.co/Bm8Bfhyi0k pic.twitter.com/cMDuZbq0AQ

Punch or not, here’s hoping Brunson slickly writes in a reference to this Emmy moment during Season 2 of “Abbott Elementary,” which begins airing on ABC next week.

It’s going to be a great year. 😌 Head back to school with your favorites when #AbbottElementary returns for Season 2 on Wednesday, Sept 21 at 9/8c! Watch on ABC and Stream on Hulu. pic.twitter.com/tN8TvuTMFq

Quinta Brunson, The New Face Of Olay, Calls Her Achievement A ‘Pinch Me Moment’

Supporters of Insurrectionists Gather at ‘Justice for J6’ Rally
Jeffrey Dahmer Once Asked Lyfe Jennings To Sing For Him During Their Time In Prison Together
5 Facts You Should Know About Top Dawg Entertainment’s Ray Vaughn
Tiffany Jackson, Former Texas WNBA Star, Dies At 37
10 Reminders As To Why Trina Remains ‘The Baddest Chick’