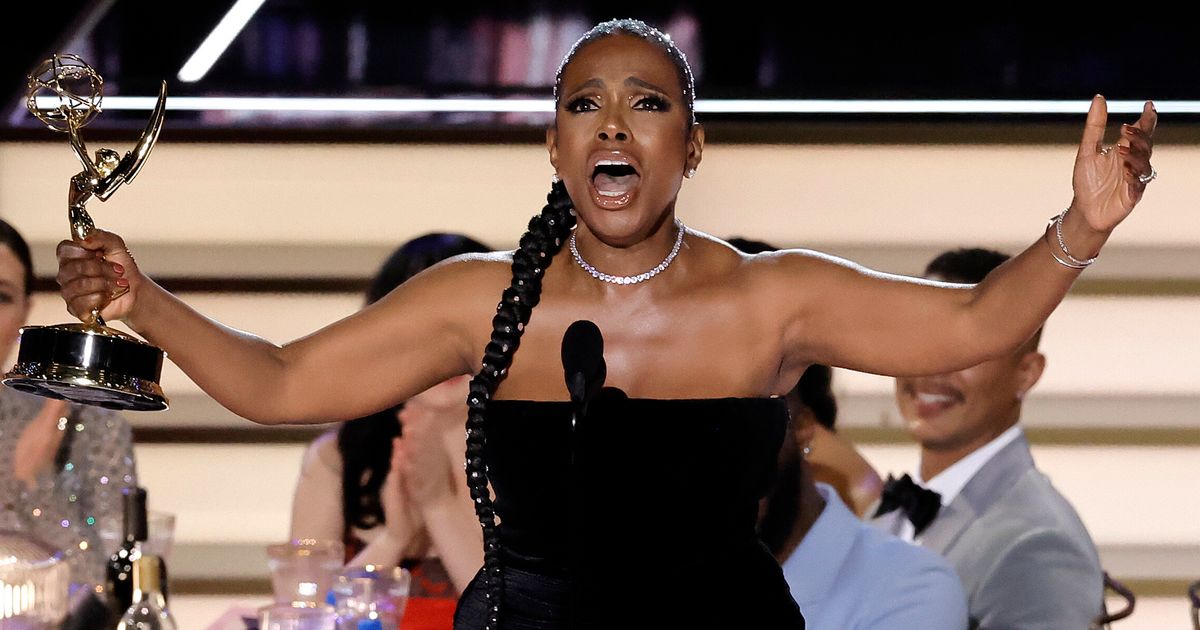 Sheryl Lee Ralph brought Hollywood A-listers to their feet ― and showed off her powerful singing voice ― with a history-making Emmy win Tuesday night.

The actor was visibly emotional as she was presented with the Emmy for Outstanding Supporting Actress in a Comedy Series for her portrayal of no-nonsense kindergarten teacher Barbara Howard on ABC’s “Abbott Elementary.”

When it came time to give her speech, Ralph did so at first in song, demonstrating her musical prowess with a few bars of Dianne Reeves’ “Endangered Species,” sung a cappella.

#Emmy winner Sheryl Lee Ralph: “Anyone who has ever, ever had a dream and thought your dream…couldn’t come true. I am here to tell you that this is what believing looks like. This is what striving looks like. And don’t you ever, ever give up on you.” https://t.co/h3GrtHDUA6 pic.twitter.com/qPpGSFfGw5

In some respects, Ralph’s performance was a nod to her musical theater past. Prior to her television fame, the actor received acclaim (and a Tony Award nomination) for originating the role of Deena Jones in the Broadway musical “Dreamgirls” in 1983.

To Ralph’s legions of fans, her Emmy win is seen as overdue recognition of her many talents ― a point she alluded to just moments later.

Ralph is only the second Black woman to win in her category. In 1987, actor Jackeé Harry won for her portrayal of Sandra Clark on NBC’s “227.”

Interestingly, Harry pointed out that NBC originally wanted Ralph for the role of Sandra in her tweet congratulating the fellow actor.

The network originally wanted @thesherylralph to play Sandra on 227, but I got the part and won an Emmy for it.

Now, Sheryl joins me as the 2nd black woman in this category and deservedly so! 🎉 I’m so exited for her #Emmys win!

“Abbott Elementary,” which was nominated for seven Emmy Awards in total, has received widespread praise from critics as a poignant and comedic reminder of the challenges public educators face daily.

Speaking to HuffPost in April, Ralph described “Abbott Elementary” as a “sweet surprise,” adding: “I’m just so thankful that I have been able to last like this in my career to enjoy this show at this time.”

‘Abbott Elementary’ Stars Schooled Everyone On The Emmys 2022 Red Carpet

Karens And Beckys Put On The Spot In New Documentary About White Women’s Role In White Supremacy
Brett Favre Is The Welfare Queen Republicans Warned Us About
Flex Or Fail? Fresh Out Of Prison Finesse2Tymes Debuts His Blinged Out Handcuff Bracelets
Elijah McClain Was A Sensitive Black Man And That Still Didn’t Save His Life
‘Atlanta’ Star LaKeith Stanfield Reacts To Social Media Frenzy Amidst Rumors He’s Engaged To Model Girlfriend