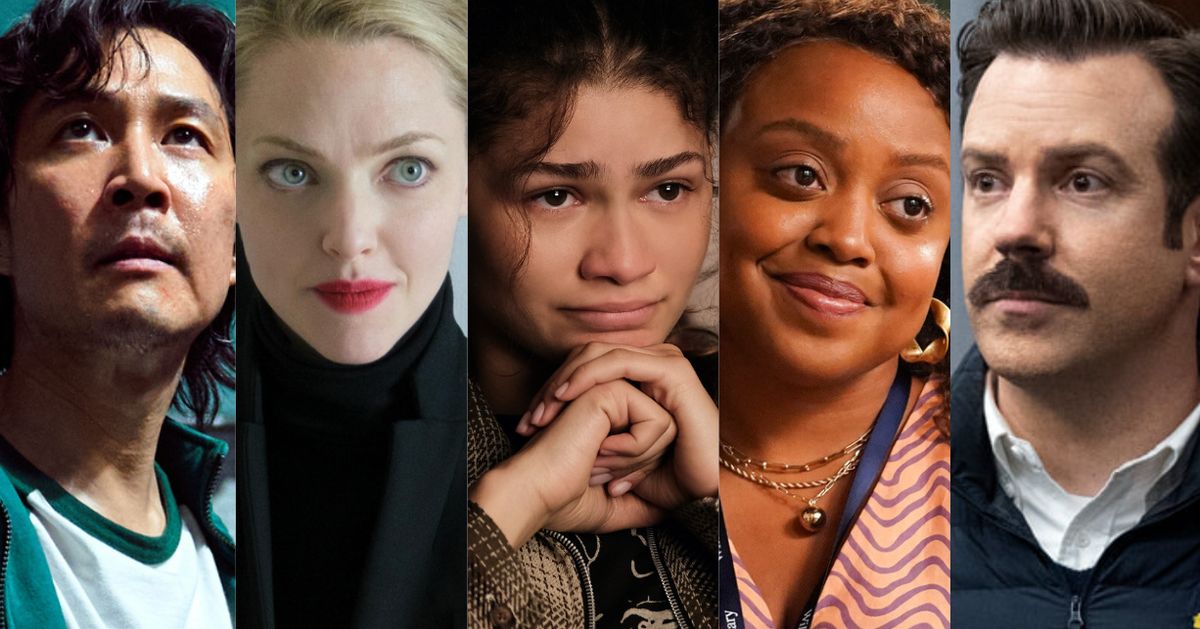 Turns out the biggest villain in television this year is “Sunday Night Football” for bumping the 2022 Emmy Awards from its long-standing prime-time perch.

So, no, you didn’t miss the awards show. The 74th annual ceremony was held on Monday night, and ― apart from the somewhat disorienting time slot ― this year’s event marked a major return to normalcy.

After two years of pandemic-adjusted proceedings, television’s biggest stars once again packed the Microsoft Theater in Los Angeles, which has housed the show since 2008, to celebrate in full force the shows that made us laugh, cry or even change the channel.

The year’s show was hosted by “Saturday Night Live” comedian Kenan Thompson and predominantly honored returning favorites over a fresh crop of rookie series. “Succession,” HBO’s portrait of a twisted family dynasty, and “Ted Lasso,” Apple TV+’s sports comedy starring Jason Sudeikis, once again came out on top in the drama and comedy categories after leading this year’s pack of nominees.

Lee Jung-jae, the star of the record-breaking South Korean drama, now stands as first performerr in a non-English series to win in the Outstanding Lead Actor in a Drama Series category. The ABC sitcom, meanwhile, picked up the trophy for Outstanding Writing For a Comedy Series, making creator Quinta Brunson only the second Black woman to win in the category. Sheryl Lee Ralph, who also stars on the show, landed her first Emmy win after a nearly five-decade career, breaking into song during a particularly powerful acceptance speech.

Elsewhere, both Jean Smart (“Hacks”) and Zendaya (“Euphoria”) repeated their wins in the Best Actress races.

As for the limited or anthology series, “White Lotus,” HBO Max’s pointed vacation satire from creator Mike White, easily dominated with wins for cast members like Jennifer Coolidge and Murray Bartlett and ultimately triumphed over the competition in the Outstanding Limited Series category.

But just like in years past, the field was as stacked as ever with major A-list talent, resulting in Amanda Seyfried (“The Dropout”) and Michael Keaton (“Dopesick”) coming out on top in the lead acting races.

Check out the full list of nominees and winners below.

“Only Murders in the Building” (Hulu)

Steve Martin, “Only Murders in the Building”

Martin Short, “Only Murders in the Building”

Outstanding Lead Actress in a Limited Series or Movie

Outstanding Lead Actor in a Limited Series or Movie

Andrew Garfield, “Under the Banner of Heaven”

Oscar Isaac, “Scenes from a Marriage”

Outstanding Supporting Actress in a Limited or Anthology Series or Movie

Outstanding Supporting Actor in a Limited or Anthology Series or Movie

Outstanding Directing for a Drama Series

Lorene Scafaria, “Succession” (“Too Much Birthday”)

Outstanding Directing for a Comedy Series

Lucia Aniello, “Hacks” (“There Will Be Blood”)

Jamie Babbit, “Only Murders in the Building” (“True Crime”)

Cherien Dabis, “Only Murders in the Building” (“The Boy From 6B”)

WINNER: MJ Delaney, “Ted Lasso” (“No Weddings and a Funeral”)

Outstanding Directing for a Limited Series

Outstanding Writing for a Drama Series

Outstanding Writing for a Comedy Series

Lucia Aniello, Paul W. Downs and Jen Statsky, “Hacks” (“The One, the Only”)

Steve Martin and John Hoffman, “Only Murders in the Building” (“True Crime”)

Jane Becker, “Ted Lasso” (“No Weddings And a Funeral”)

Sarah Naftalis, “What We Do in the Shadows” (“The Casino”)

Stefani Robinson, “What We Do in the Shadows” (“The Wellness Center”)

Outstanding Writing for a Limited Series, Movie or Drama Special

Outstanding Writing for a Comedy Special

“The Daily Show With Trevor Noah”

“The Late Show With Stephen Colbert”

WINNER: “Lizzo’s Watch Out for the Big Grrrls”

After Decades In The Game, Legends Sheryl Lee Ralph And Jennifer Coolidge Finally Get Their Due

Jeffrey Dahmer Once Asked Lyfe Jennings To Sing For Him During Their Time In Prison Together
Tabitha Brown Is Ready For The ‘Family Reunion’ That Is Her Cooking Book Tour
Jada Pinkett Smith Explains Why Alpha Males ‘Don’t Pay Attention To Feelings’
Blac Chyna Goes Bald Baddie With New Hairless Look: ‘A Confident Bald Woman, There’s Your Diamond In The Rough’
Meet Armani Caesar: 4 Facts About Griselda Records’ First Lady