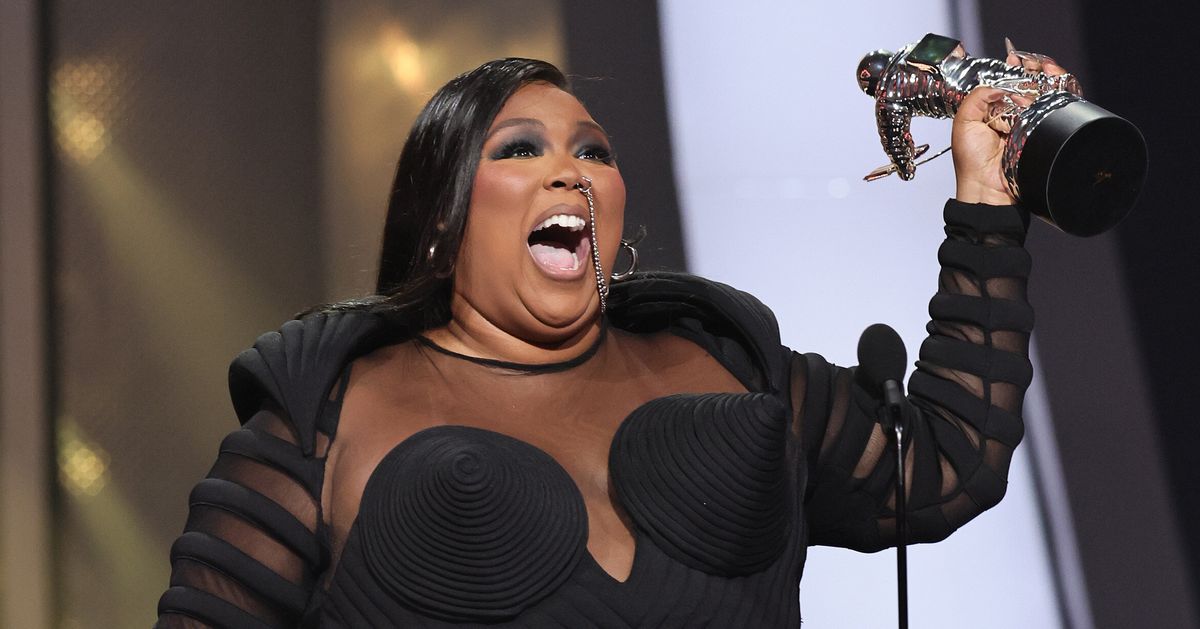 Booked, busy and thoroughly unbothered, Lizzo had absolutely no time for a comedian who body-shamed her days before an appearance at the 2022 MTV Video Music Awards.

Ahead of the ceremony on Sunday night, Aries Spears made degrading remarks about the singer’s appearance, including that he can’t “get past the fact that she looks like the shit emoji” among other insults.

But Lizzo didn’t give Spears even a second of her attention at the award show, where she walked away with an award in the Video For Good category for her song “About Damn Time.”

While she didn’t specifically comment on Spears’ attacks, she did manage to subtly drag him in her acceptance speech.

“I want to say thank you so much for supporting me and loving me. And now, to the bitches that got somethin’ to say about me in the press,” she said, evoking how Nicki Minaj called out Miley Cyrus at the ceremony in 2015.

“Best revenge is your paper, bitch!” she added before leaving the stage.

“About Damn Time” by Lizzo just won Video for Good at the 2022 #VMAs!” pic.twitter.com/CUvwWineyn

Lizzo also took the time to share a message about the power of voting with viewers, adding, “I don’t know what ‘music videos for good’ means, but I do know what your vote means, and that’s a fucking lot.”

The music superstar was up for five awards at the ceremony, including Artist of the Year, Song of the Year, Best Pop, Video for Good and Song of Summer.

Spears dissed Lizzo during an appearance on “The Art of Dialogue,” which premiered on YouTube earlier this week, when he was asked whether he thought the she was a good songwriter. “She’s got a very pretty face, but she keeps showing her body off like, come on, man,” he said in response. “Come on, yo.” A clip from the interview has since racked up over 3 million views on Twitter.

While Lizzo stayed mostly mum on Spears, her fans came out in full force to support the singer online, questioning why people are once again giving unsolicited opinions about her body.

Aries Spears is a fragile child who is throwing a tantrum because Lizzo is living in her authentic truth and his ugly rant is a failed disguise for the hurt he feels for the lack of support in his career as a fat Black entertainer. THIS is what you call projectionism. Really sad. https://t.co/xxHWa8hpuV

I’m really blown away that Aries Spears had the big mouthed audacity to attack Lizzo for being fat. He’s a fat Black man encouraging us to weaponize fatphobia against Lizzo, the math just ain’t mathing pic.twitter.com/NCEdaEIfwn

#AriesSpears is one bitter azz dude. Instead of fat-shaming Lizzo, he should take a deeper look within himself, and learn to STFU. His statement was completely unnecessary and uncalled for.

It’s not even that Aries Spears being overweight and hideous makes him ineligible to speak on Lizzo. Nobody should be speaking on her body, idc how they look.

The way the world hates fat women is astounding.

Fat women are literally just living their lives and someone will publicly claim disgust.

Aries Spears fat himself yet has the balls to act like he’s disgusted by a fat woman simply because she’s fat.

Lizzo bothers no one..

Earlier in the evening, Lizzo stunned in a billowing Jean Paul Gaultier gown on the red carpet and performed a show-stopping rendition of “About Damn Time” and new single “2 Be Loved (Am I Ready).”

Watch her performance below.

2022 MTV VMAs Red Carpet: All The Wildest Looks You Need To See

No Yolanda Adams Slander Shall Prosper: Tamron Hall Puts Kim Burrell In Her Place In The Most Classy Way Possible
Gangsta Boo Talks Animosity Between Three 6 Mafia & Bone Thugs-N-Harmony
North Carolina A&T State University Receives $500K Grant To Boost Its STEAM Education Program
Jeffrey Dahmer Once Asked Lyfe Jennings To Sing For Him During Their Time In Prison Together
Biden Maintains Ambitious Refugee Cap Despite Missing It Badly This Year