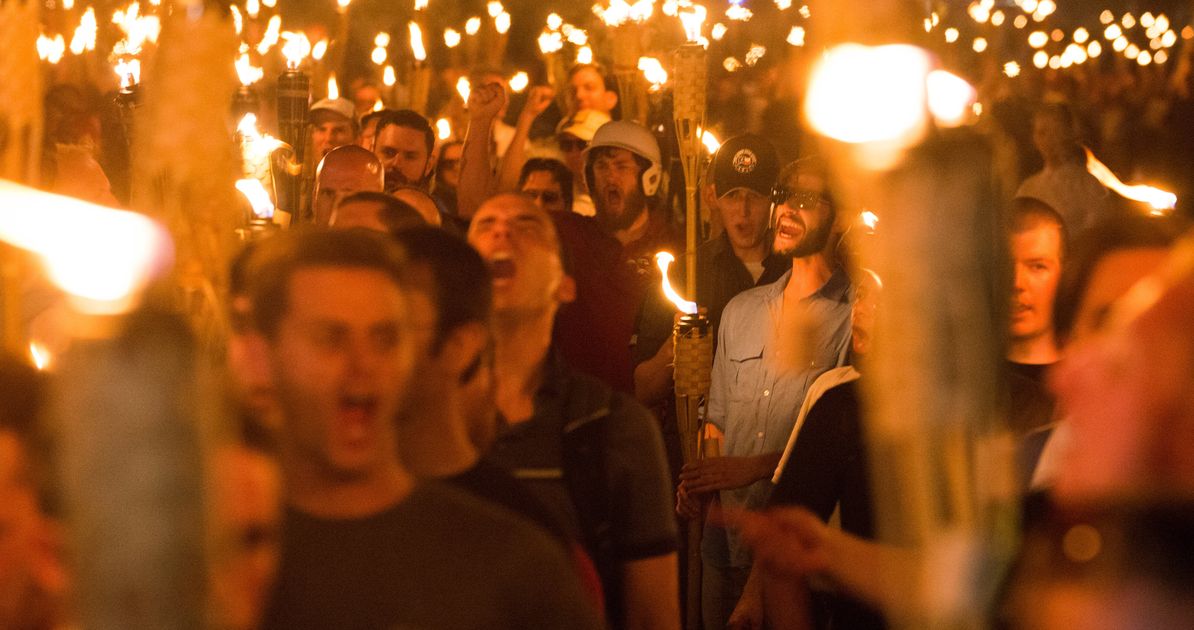 The hundreds of right-wing extremists and fascists who invaded Charlottesville, Virginia, five years ago this week were unashamed and proud, invigorated by the ascendance of then-President Donald Trump, who had campaigned with open bigotry — a call for a Muslim ban, calling Mexicans “rapists” — and still won the election. Some were veteran white supremacists, belonging to older groups like the KKK, League of the South, or the neo-Nazi National Socialist Movement. But others were younger keyboard warriors who felt they had helped meme Trump into the White House, and who saw the “Unite the Right” gathering in Charlottesville as a coming out party for the so-called “alt-right,” an opportunity to step out from behind their avatars for an IRL show of force.

But after they terrorized the city for two days, and stories of their cruelty spread — a torch march across the University of Virginia campus chanting “Jews will not replace us,” death threats against local synagogues, the brutal beating of a Black counterprotester, and driving a car through a crowd of anti-fascists — many Unite the Right attendees found themselves pariahs when they got home.

They were arrested, lost their jobs, kicked out of school and shunned by their local communities. Later, a lawsuit would drive many of the rally’s organizers into financial ruin, and some of the groups involved, such as Identity Evropa, Traditionalist Workers Party and Vanguard America, disbanded.

This was due in large part to the work of anonymous anti-fascist researchers who pored over photos and video footage from Charlottesville, compiling evidence to identify the attendees.

Friday marks the five-year anniversary of Unite the Right, and some of those same anti-fascists have a message for all the white supremacists who went to Charlottesville in 2017 and haven’t yet been identified: We will find you.

A coalition calling itself Ignite The Right launched a website this week featuring an extensive database of every single white supremacist who has allegedly been identified as attending the Charlottesville rally. It also includes photos of many attendees whose names, five years later, remain unknown.

“Antifascists are continuing to work towards exposing every single person who participated,” the Ignite The Right website declares. “We do not forgive. We do not forget.”

“This project is dedicated to Heather Heyer and all the victims of racism,” it says, referring to the 32-year-old who died after a man drove his vehicle into a crowd of counterprotesters.

Ignite The Right is a project that involves over a dozen anti-fascist groups and individuals, many of whom have an established track record of positively identifying white nationalists, and whose work has been verified by media outlets, including HuffPost. They include the Anonymous Comrades Collective, which unmasked one of the country’s most notorious online neo-Nazis, as well a white supremacist elementary school teacher. Other groups in the Ignite The Right coalition include Dixie Tears Streaming Service, @SalishCoastA, @PacAntifa, @SunlightAFA and @BonnotGalaxy.

“As of this writing, we have 277 entries in our database but it’s growing quickly as more tips come in. 67 of the entries, we don’t know who they are yet,” one of the researchers, who asked to remain anonymous to protect themselves from reprisals, told HuffPost on Wednesday. “We expect this database to grow to over 500 as we start working on random faces from footage.”

The database of Unite the Right attendees is modeled, in part, after a database created by “Sedition Hunters,” online sleuths who expose the identities of those who stormed the U.S. Capitol on Jan. 6, 2021.

Each yet-to-be identified white supremacist is assigned a nickname based on their appearance, like #WhiteHardHatUTR or #MysteryGoateeUTR. Photos of them at the rally are placed alongside descriptions of the extremist groups to which they likely belonged, or actions they took at the rally.

The entry for #RedBeardUTR, for example, includes images from video footage of the still-unidentified man beating a Black counterprotester, Deandre Harris, inside a parking garage.

Ignite The Right’s members are counting on the public to send them information that might help identify these white supremacists.

“Since launching the site this morning, we have received over a dozen tips from the public,” the researcher said. “We expect there to be frequent updates to the site over time.”

The researcher added that they believe “one of the yet-to-be-identified attendees were also in attendance at the January 6th insurrection.”

Unlike the Sedition Hunters, who have exposed many Jan. 6 insurrectionists, Ignite The Right does not and will not cooperate with law enforcement — upholding a long-standing tenet of anti-fascist activism.

Ignite The Right also promises to be unsparing in whom it chooses to identify. Contrary to Trump’s infamous declaration in the days after the 2017 rally, there were no “very fine people” who participated.

“One of the great canards surrounding Unite the Right is that many ‘very fine people’ were somehow tricked into attending under the belief that this was really just a rally in opposition to the removal of Confederate monuments,” the Ignite The Right website states. “Attendees travelled thousands of miles, booked flights and hotels, and made informed decisions to attend the rally organized by well-known fascists.”

The anti-fascists also promise to never stop hunting, no matter how long it takes.

Slavery Fueled Our Climate Crisis. Here’s How Reparations Can Slow It Down.

Meet Armani Caesar: 4 Facts About Griselda Records’ First Lady
Gigi Hadid Told Kanye West He’s A ‘Bully And A Joke’ After He Attacked A Critic
Jada Pinkett Smith Reveals She Had A ‘Disgusting’ Kiss With Rapper Tupac Shakur
‘Interview With The Vampire’ Is Blacker And Gayer Than Ever — And It Feels Just Right
Radio Host Kendra G Accuses DaniLeigh Of Trying To Have Her Removed From Interview: ‘You Ain’t Going To B. Simone Me’