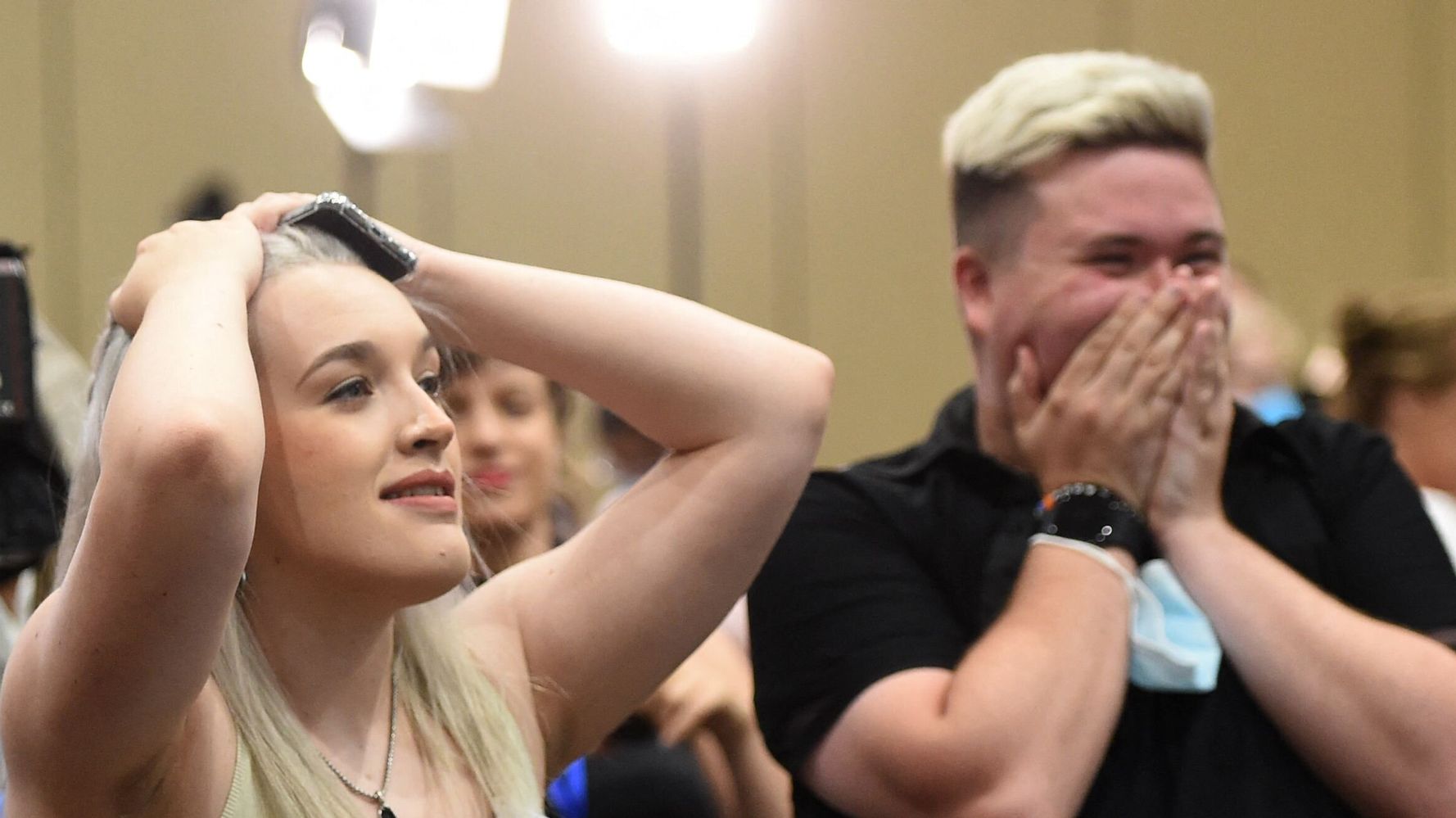 Just over a half-million people in Kansas radically altered the political debate about abortion on Tuesday. Not only did they vote to reject a referendum that would have removed abortion protections from the state constitution, but they did so by a double-digit margin, with a stunning surge of turnout, in a state that former President Donald Trump recently carried by 15 points.

This has either panicked or thrilled political consultants nationwide and filled Wednesday’s airwaves and newspaper columns with analysis. It was the first test of abortion rights after the Supreme Court repealed Roe v. Wade in June, and the result was unambiguous.

But before the landslide win and talks of national political landscapes, it was mostly ordinary people like Janelle Bogart who were doing the real work. Bogart, a pro-choice organizer with a day job in sales, let HuffPost tag along as she canvassed houses in 103-degree heat in a Wichita suburb a week before the election.

One woman answered the door with a cat in her arm and a young son who came up to her hip. “Don’t worry, I’m voting no!” she said in regards to her vote in favor of abortion rights.

Bogart decided to skip the houses that had “Vote Yes for Value Them Both” lawn signs. She did her best to be as genial and warm as some residents watched from their lawns or eyed us from their pickup trucks while we zigzagged through the neighborhood.

While cheerful and friendly, Bogart’s take-no-shit energy is sugar-coated with some midwestern charm. It makes her extremely adept at knocking on strangers’ doors – especially those who don’t agree with her.

“Half the house is on one side, and half the house is on the other,” one older man who answered the door told Bogart. He walked out onto his porch with a barking Shih Tzu at his ankle. (One perk of canvassing, Bogart noted: “You get to meet a ton of cute pets.”)

The man politely declined Bogart’s pro-choice pamphlet multiple times before we made our exit. “Education is paramount!” Bogart told him while waving goodbye, before whispering to me: “He was definitely not taking my literature.”

Kansans for Constitutional Freedom, the pro-choice collective that recruited canvassers like Bogart, accomplished what many believed was impossible: A win on abortion rights in a red state after the fall of Roe.

Abortion is already heavily-regulated in Kansas, and Republicans had a lot of advantages going into the ballot initiative. The vote was held during a primary election, which is normally a closed election with a lower turnout that skews mostly Republican.

Pro-choice advocates and lawmakers also claimed Republicans intentionally made the language of the amendment vague and confusing to mislead voters. Kansans received a deceptive text message the night before the election, urging them to vote yes on the amendment because it “will give women a choice” and “protect women’s health,” even though a vote in favor of the amendment would have taken away abortion protections. The texts, which were unsigned, were later linked back to a Republican-aligned firm that had connections to former U.S. Rep. Tim Huelskamp (R-Kan.).

Some conservatives accepted defeat. “Words could never express the sadness and emotion myself and many Kansans are feeling after the Value Them Both amendment was not adopted. This is an enormous blow to efforts to protect the sanctity of life in Kansas,” Sen. Roger Marshall (R-Kan.) said in a statement to the press Tuesday night.

Others, however, downplayed the impact of the pro-choice win in Kansas.

Mollie Hemmingway, editor-in-chief at the Federalist, said on Fox News that abortion rights advocates greatly outspent anti-choice organizations, but there’s no evidence that was the case. Although, both sides spent about the same on advertising. And one National Review reporter made the somewhat ludicrous assertion that voters were misled by pro-choice groups because it was a “falsehood” that voting “yes” on the amendment meant abortion would go away – rather, it just meant the state legislature would decide the issue. But both sides understood throughout the campaign exactly what the largely Republican body would do if the measure passed.

Both conservative pundits also implied that anti-abortion initiatives might be more successful with more incremental changes.

Despite the uphill battle, abortion rights won out in Kansas. Voters chose to preserve abortion protections in the state by a double-digit margin – with a historic voter turnout, as high as Kansas saw in the 2008 presidential election.

Some of this can be attributed to the Supreme Court decision, Dobbs v. Jackson, which repealed Roe less than two months ago. Seventy percent of Kansans who registered to vote after the Dobbs ruling on June 24 were women, according to political data and research group TargetSmart.

“Kansans had a unique opportunity to protect their constitutional rights and freedom at a time when those rights had just been stripped at the federal level,” said Ashley All, the director of communications at Kansans for Constitutional Freedom. The Supreme Court’s decision was “a wake-up call” for all Kansans but especially more moderate voters who thought their rights were safe under Roe, All added.

“Kansans had a unique opportunity to protect their constitutional rights and freedom at a time when those rights had just been stripped at the federal level.”

– Ashley All, Kansans for Constitutional Freedom

And the state of abortion access has never been more dire since Roe fell, underlining the importance of the outcome of Kansas’ ballot vote. Around a dozen states in the South and Midwest have already severely restricted or banned abortion. Texas, Oklahoma, South Dakota, Missouri and Arkansas all have total abortion bans in effect. North Dakota, Nebraska, Wyoming and Iowa are in court challenging severe restrictions or waiting on bans to take effect. Put all those states together and you have most of the Midwest and much of the South – making Kansas an unexpected sanctuary state for abortion care.

There was also the idea that Kansans weren’t voting for a politician – they were voting for a singular issue or belief system.

“There’s this unique culture in Kansas where we care for our neighbors and we really do look out for the people in our communities,” said Nigel Morton, an organizer at URGE: Unite for Reproductive and Gender Equity, one of the groups under the Kansans for Constitutional Freedom collective.

“As far as getting a rap for being a deep conservative state, we do have some major conservative players, but they’re just the loudest,” Morton added. “I think most Kansans are really on the side of progressive history.”

Kansas has a large contingency of unaffiliated voters: About 44% of registered Kansans are Republicans, 26% are Democrats and 29% are unaffiliated. Republicans were banking on those unaffiliated voters not showing up for a primary election, but pro-choice organizers canvassed and phone banked for months to ensure that every Kansan knew what was at stake.

The number of unaffiliated Kansas voters speaks to the state’s rich legacy of always paving its own path. Once dubbed “Bleeding Kansas,” it was the first free state in the Civil War. It was one of the first states to ratify the 19th Amendment, which gave women the right to vote. Kansas also has also had three Democratic women governors, including its current governor, Democrat Laura Kelly, who won her primary election on Tuesday.

Kansans for Constitutional Freedom also took a tactical approach to talk about abortion rights. Its messaging relied on personal liberties, freedom and eliminating constitutional rights. The group worked with organizations that spanned the political spectrum and many of their advertisements didn’t even use the word abortion.

“This was really successful because we focused on this as a non-partisan issue,” All said. “We were able to engage folks in a non-partisan conversation about this issue and that is something that really played to our strengths and really helped us move forward. People see this much more as a personal health care issue, they see it as a complicated, moral and sometimes religious decision. But it comes down to a personal decision.”

The country will likely see similar campaign tactics in other states in the near future, as several ballot initiatives on abortion rights are coming up. Vermont, Pennsylvania, Montana, Michigan, Kentucky, Colorado and California may vote on ballot measures in November.

Bogart, the local organizer, appropriately spent election night collecting ballot boxes from polling places. When she finished, she brought pizza to a polling spot where people had been waiting in line to vote for nearly three hours. The 37-year-old said she became emotional when the overwhelming number of pro-choice votes were reported.

“We had a lot of women who put their lives on hold for the campaigning and the marches and the canvassing. With everything that was against us: They tried to put it on a primary ballot, they were spreading lies about what the amendment meant, they were very heavily funded by all the church groups,” Bogart said through tears.

“It feels good. It feels like we’re unfuckable with. Don’t try to come after us because we will organize and get things done.”

What The Stunning Result From Kansas Might Tell Us About November

Sheldon Epps Sets A New Path For Himself With ‘My Own Directions’
Oprah Parties With Kim Kardashian, J. Lo And More While Celebrating 69th Birthday
Biden Administration Seeking To Change Census Rules To Identify Latino/Hispanic As A Race Instead Of Ethnicity, Which May Prove Problematic
Leadership Highlight: Lane College’s SGA President Demetris Johnson Jr.
Elijah McClain’s Mother Slams Aurora PD After Rehiring Officer Who Threatened Him With A Dog Bite