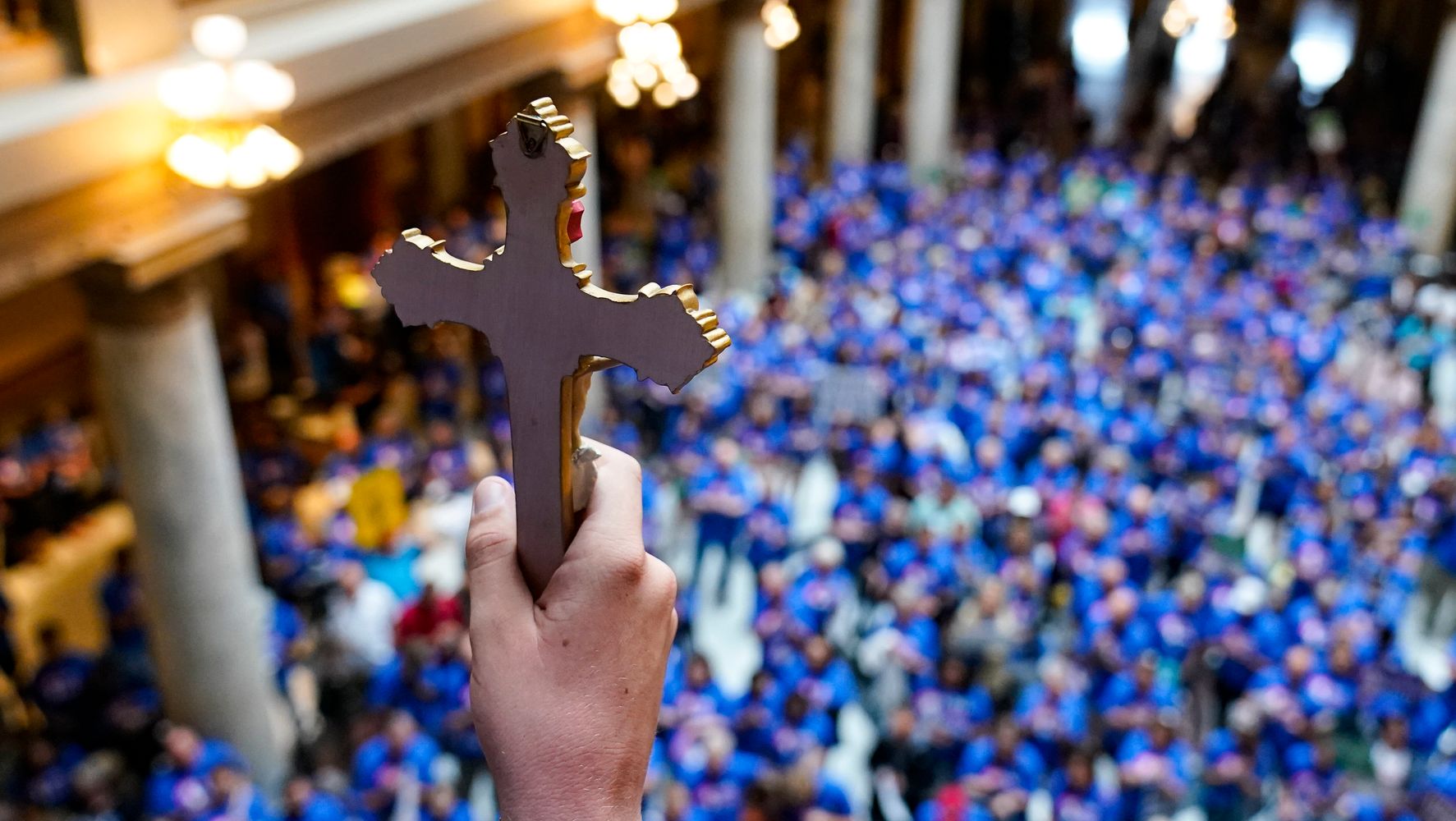 During special legislative sessions, lawmakers from both states debated bills that aim to ban nearly all abortions with little exceptions. The state capitol buildings were filled with anti-abortion and abortion-rights protesters ― sparking heated debates and rallies that dominated local headlines this week. Advocates on both sides testified on their state legislative floors in hopes of swaying lawmakers’ votes.

West Virginia Gov. Jim Justice (R) is expected to sign his state’s near-total abortion ban into law in the coming days, after the bill successfully passed both chambers this week. Indiana’s abortion restriction has further to go: It has yet to see a vote in either chamber, but it passed out of committee in a 7-5 vote on Tuesday. The Indiana state Senate will vote on the ban on Saturday, and the bill is expected to quickly pass through the state’s GOP-controlled legislature and signed into law by Republican Gov. Eric Holcomb.

Indiana currently has seven abortion clinics that serve 1.3 million women of reproductive age. West Virginia has one abortion clinic left that serves the entire state, which has around 313,000 women of childbearing age. If these bills become law, all of these clinics will stop providing abortion care, forcing those who can to travel out of state to get care. (These numbers don’t include transgender and nonbinary people in these states who are able to get pregnant.)

Since the Supreme Court overturned Roe last month, over a dozen states have banned or severely restricted abortion. The ruling leaves behind fear and confusion, legal gray areas and a patchwork of abortion care — all of which will disproportionately impact low-income people, women of color and folks who live in rural areas. Many people will have to travel out of state to get abortions, while others with fewer resources will be forced to carry unwanted pregnancies to term.

In West Virginia, the state legislature called a special session to propose House Bill 302 which would ban abortion in nearly all cases, criminalizing and threatening providers with up to 10 years in prison. As state senators voted to pass the abortion ban late Friday night, abortion rights advocates could be heard outside of the legislature chanting and protesting the restriction.

The bill has narrow exceptions for ectopic pregnancies, fatal fetal abnormalities and medical emergencies that are life-threatening, although experts have noted that “life-saving” or medical emergency exceptions are often vague and can lead to pregnant people being put at unnecessary medical risk. It also requires physicians to notify a minor’s parents and then wait a mandated 48 hours before providing the minor with abortion care — a waiting period that is required even if the minor is experiencing a life-threatening emergency like an ectopic pregnancy.

The ban also includes exceptions for victims of rape and incest, thanks to an amendment that passed this week. The amendment, however, only allows victims to access abortion within the first 14 weeks of pregnancy and they’re required to report the crime to law enforcement before accessing care. Restrictions that require victims to report to cops before accessing an abortion are inherently problematic since two out of every three sexual assaults go unreported, and law enforcement officers can sometimes be the perpetrators of sexual violence.

“If a man decides that I’m an object, and does unspeakable, tragic things to me, am I, a child, supposed to carry and birth another child?” Addison Gardner, 12, said during the public hearing portion of debate.

“Am I to put my body through the physical trauma of pregnancy? Am I to suffer the mental implications, a child who had no say in what was being done with my body?” she continued. “Some here say they are pro-life. What about my life? Does my life not matter to you?”

The West Virginia abortion ban passed in the state House earlier this week and in the state Senate late Friday night. The bill now heads back to the House to review small changes before heading to the governor’s desk. Justice is expected to sign the bill into law in the next few days. One of the main proponents of the bill was Justice, who earlier this week added the topic of abortion law to the special session and asked the legislature to “clarify and modernize” the state’s abortion regulations.

Indiana’s Republican-controlled legislature proposed Senate Bill 1 this past week, which bans abortion from the time of conception. The bill includes exceptions for if the pregnant person’s life is at risk, although, similar to the West Virginia bill, experts argue that these exceptions are poorly worded and leave physicians in tough spots that often put pregnant people at risk. The bill also has exceptions for rape and incest but a victim is required to sign an affidavit attesting to the attack before they can receive care.

Earlier this week, Indiana state Sen. Mike Young (R) proposed an amendment that would strip the rape and incest exceptions from the bill.

“What you’re telling me is if they rape the woman, we oughta kill the baby,” Young told his colleagues. “That is not right and I will never, ever accept that.” Young’s amendment failed in the Senate Thursday night in a 28-18 vote.

The Indiana Senate is scheduled to vote on S.B. 1 on Saturday and then it will be sent to the House. The bill is expected to pass in both the Senate and House given that Republicans control both chambers with supermajorities, and the state has a Republican governor. Indiana lawmakers have until Aug. 14 to pass the bill, but party leaders have said the legislature will likely wrap up ahead of that deadline.

Vice President Kamala Harris met with Indiana Senate Democrats on Monday to express her support for them as they began a long-shot effort to block S.B. 1.

“One does not have to abandon your faith or your beliefs to agree that the government should not be making this decision for her,” Harris said at a roundtable meeting. “An individual should be able to choose based on their personal beliefs and the dictates of their faith. But the government should not be telling an individual what to do, especially as it relates to one of the most intimate and personal decisions a woman could make.”