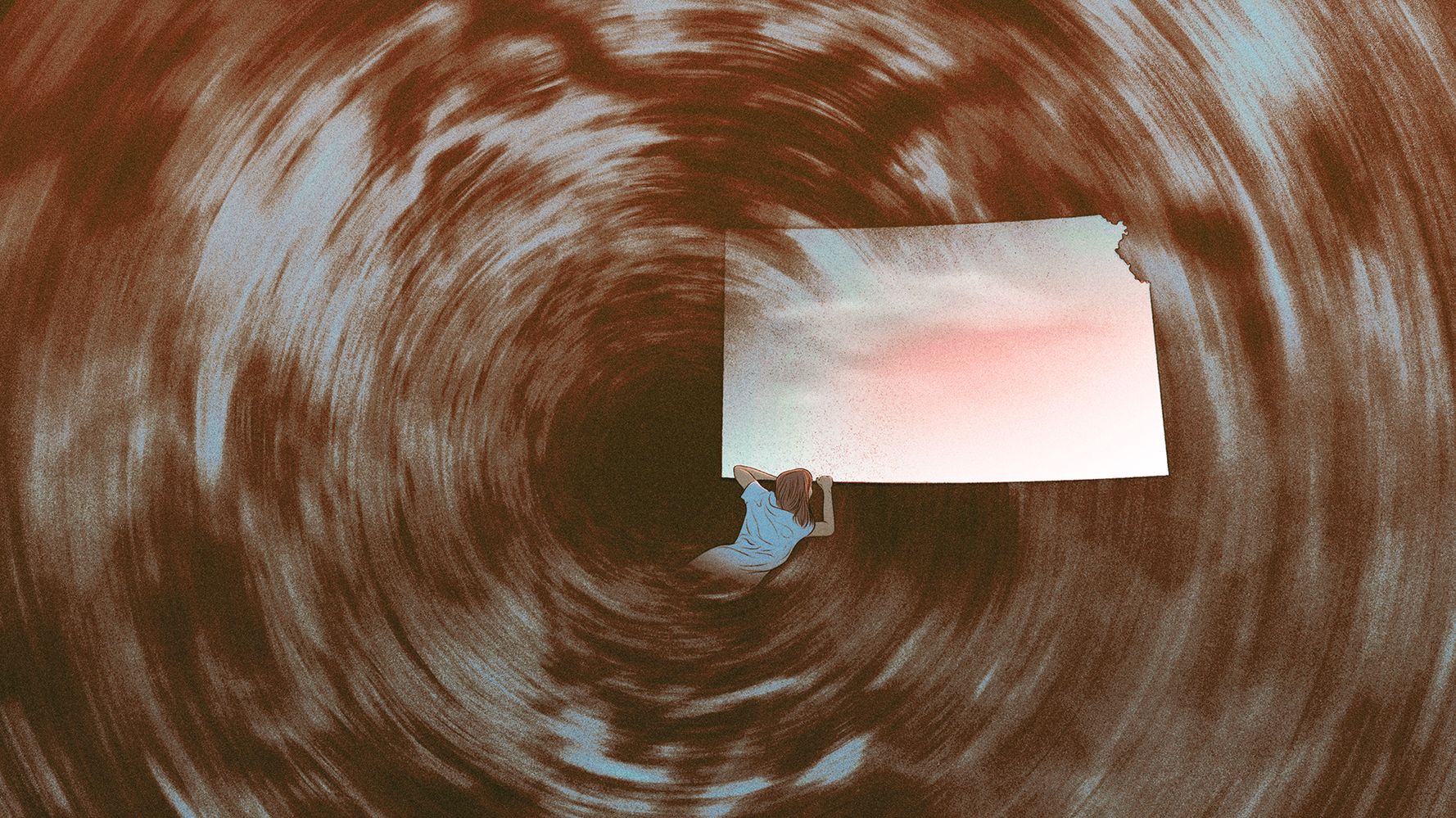 WICHITA, Kan. ― In the last few weeks, Janelle Bogart has knocked on dozens of doors in the Wichita suburbs reminding people to head to the polls Tuesday. The vote will decide whether to keep abortion legal in Kansas — a state that, against all odds, has become a valuable refuge for millions of people living in states where abortion is now illegal.

“This is a really personal vote for me,” Bogart told me while canvassing in 103-degree heat. The 37-year-old is in sales but uses her free time to canvass for Kansans for Constitutional Freedom, an abortion rights organization working against the proposed amendment.

“I don’t want to have a daughter and when she asks, ‘Where were you when Roe fell and Kansas took away abortion protections?’ I don’t want to say, ‘Well, we were just really busy,’” Bogart said. “I want to be able to tell her, ‘Girl, I busted my ass trying to protect your right to choose, too.’”

The “Value Them Both” amendment, created by anti-abortion Christian groups, will be the first vote on abortion rights since the Supreme Court last month repealed Roe v. Wade, the 1973 ruling that afforded federal abortion rights. If the amendment passes, it will remove protections for abortion care from the state constitution and open the door for anti-abortion lawmakers to pursue a total ban ― a move Republicans have publicly denied but were caught on tape discussing. A total abortion ban in Kansas would decimate access for people in Kansas as well as those in neighboring states.

“All eyes are on Kansas right now,” said Ashley Brink, director at Trust Women’s clinic in Wichita. “What happens here will set the tone for what we’re expected to see in the coming months, even years, with abortion decisions.”

Across Wichita, there are hundreds of lawn signs, bumper stickers and educational leaflets speaking to just how passionate Kansans on either side feel about abortion rights. The vote will likely be a close one, with 47% of likely primary voters saying they plan to vote for the amendment and 43% plan to vote against it, according to a recent poll.

Since Roe fell, just over a dozen states in the South and Midwest have already severely restricted or banned abortion, making Kansas an unexpected refuge for abortion care. Texas, Oklahoma, South Dakota, Missouri and Arkansas all have total abortion bans in effect. Other states, including North Dakota, Nebraska, Wyoming and Iowa, are in court challenging severe restrictions or waiting on bans to take effect. Put all those states together and you have most of the Midwest and much of the South.

“At this point, Kansas is the unlikely sanctuary state for what seems like 50% of the country geographically,” said Dr. Allison Block, a provider at the Trust Women clinic ― the same clinic where Dr. George Tiller provided abortion care before he was murdered by an anti-abortion extremist in 2009. Tiller’s clinic, once named Women’s Health Care Services, shut down after his death until 2013, when Trust Women moved in. Some clinic staff and abortion rights activists said the legacy of Tiller and his activism still lingers in the city of Wichita and within the walls of the Trust Women clinic.

“At this point, Kansas is the unlikely sanctuary state for what seems like 50% of the country geographically.”

The fact that Kansas is now a refuge for abortion seekers is emblematic of how dire access is right now. Abortion is already heavily regulated in Kansas: It’s banned after 22 weeks except to save the life of the pregnant person, and government funding for abortion care is outlawed. There are only five clinics left in the state, and there are a slew of other barriers to get care, including a 24-hour waiting period, state-mandated ultrasounds and required religious counseling.

Kansas also has a long history of deeply embedded and sometimes violent anti-abortion organizing, especially in Wichita. In 1991, more than 2,000 anti-abortion activists were arrested in what has been dubbed the “Summer of Mercy,” when thousands traveled to Wichita for six weeks and blocked entrances to abortion clinics. Before Tiller’s death, anti-abortion extremists routinely subjected the doctor to harassment and violence, including shooting him in both arms and firebombing his Wichita clinic.

But many Kansans who spoke with HuffPost repeated the same line: Don’t underestimate us. Kansas has a rich legacy of progressive politics. Once dubbed “Bleeding Kansas,” it was the first free state in the Civil War. Kansas was also one of the first states to ratify the 19th Amendment, which gave women the right to vote. The state also has had three Democratic women governors, including its current governor, Democrat Laura Kelly, who opposes the “Value Them Both” amendment.

“A lot of people really overlook Kansas, but I think most Kansans are really on the side of progressive history,” said Nigel Morton, an abortion rights organizer at URGE: Unite for Reproductive & Gender Equity.

The language of the amendment is hard to parse, which state Sen. Dinah Sykes (D) told HuffPost was meant “to confuse people.”

“Kansans for Life was very deliberate in how they did this,” Sykes said of the organization behind the Value Them Both amendment. “They were truly hand-picking who they thought would show up and the language that they thought would pass.” Sykes left the Republican Party in 2018 in part, she said, because it was becoming “more and more extreme” on reproductive rights.

Kansans for Life did not respond to HuffPost’s multiple requests for an interview.

The vote is also during a primary election, which usually has a lower voter turnout than the general election and often skews Republican ― another deliberate move, abortion rights advocates say. The vote is final despite it being conducted on a ballot in a closed primary election.

About 44% of registered Kansas voters are Republicans, 26% are Democrats and 29% are unaffiliated. “You have a group of people who are registered to vote but do not affiliate with a party and thus do not vote in partisan primaries. Almost 30% of the electorate in Kansas is not used to voting in August,” said Ashley All, the director of communications at the pro-choice group Kansans for Constitutional Freedom. “It’s an instant uphill battle for us.”

State Sen. Molly Baumgardner (R), who led the Senate push for the amendment, told HuffPost that Value Them Both is meant to be “common-sense guardrails” that will make abortion safer despite the fact that the amendment simply takes away protections for abortion care.

“We as a state do not want to be a destination state for late-term abortions,” Baumgardner added, although abortion is already banned after 22 weeks in Kansas. Less than 4% of abortions in Kansas last year occurred between 17 and 21 weeks of pregnancy.

Dr. Iman Alsaden, a Kansas abortion provider and the chief medical officer for Planned Parenthood Great Plains, rejected the notion that the amendment is needed to make abortions safer.

“Abortions are one of the safest medical procedures that we do in all of medicine. It’s safer than a colonoscopy; it’s safer than getting your wisdom teeth pulled. And it’s already highly regulated in the state of Kansas,” Alsaden said. “There’s no way that politicians know how to make abortion care safer because they don’t even understand pregnancy.”

Bogart, the door-knocker, finally called it a day as the sun was going down around 8 p.m. When I asked her how she’s feeling ahead of the vote, she responded with a laugh and said she’s an eternal optimist.

“We Kansans have a history of resisting and a history of being very progressive,” she said. “I’m holding out hope that that’s what’s going to happen here.”

Matt Gaetz: Women Who ‘Look Like A Thumb’ Shouldn’t Gripe About Abortion Rights