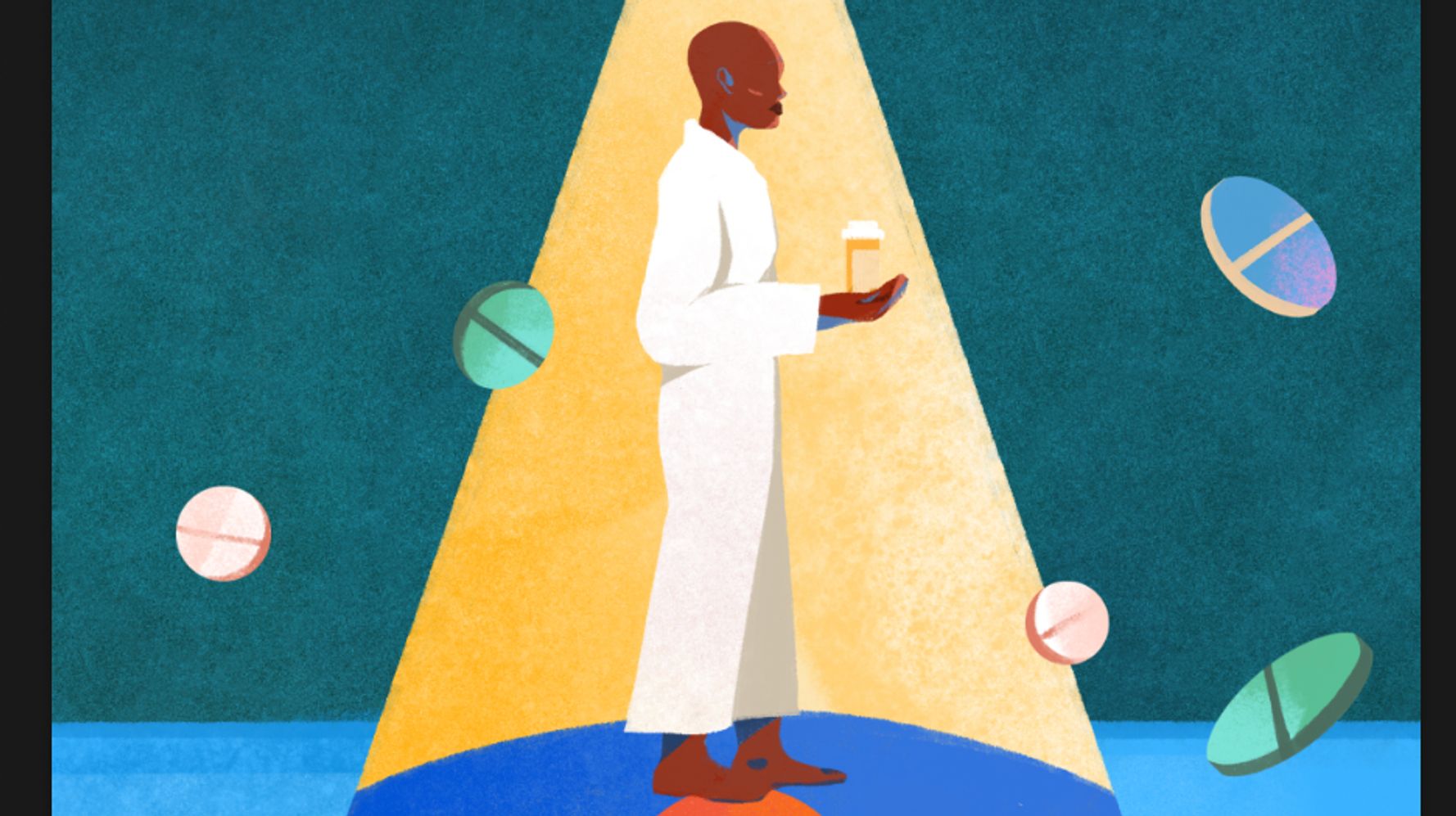 Once the suffering catches fire, you can’t ignore it. Our relentless pandemic, cruelly paired with escalating white supremacist violence, has killed more than a million Americans. Faced with such widespread grief, many of us have noticed our mental health deteriorate in unexpected ways. If you’re like me, this has also meant confronting the question-turned-grenade of self-judgment: Are you so weak and broken that you require a magic pill to put yourself back together?

“In a system already built to exhaust us and make us feel disconnected from the ability to change shit, people who were already tired have been pushed to breaking points,” says Shahem Mclaurin, a therapist and social worker based in New York. “But the stigma is really strong when it comes to psychotropic medication being something that deems you ‘less than.’”

This stigma surrounding antidepressants, and how it manifests in Black communities specifically, is why even when my own pain became so pronounced that I could no longer ignore it, I still insisted on running away from it.

I started avoiding the possibility of my depression at the onset of the 2020 lockdowns, when my mother’s rare form of cancer ― a cancer that grew perversely in her womb like a hardheaded child ― revealed itself to be terminal. When I moved from New York to North Carolina to care for her, the combined stress of keeping her safe from COVID-19, relocating to another state, planning a wedding and finishing up my book made it evident that I needed to take more drastic steps to safeguard my mental health. Still, I stubbornly refused to consider medication.

At one point, I was seeing three different therapists at the same time. I turned further toward spirituality and meditation. I significantly reduced my drinking and my social media use, and invested more into deepening relationships with my family and community. All of this helped, but my mother still died, and there was still this brokenness I couldn’t seem to repair.

Perhaps it just needed time, my shame told me. And so, a few months after my mother’s passing, I started a new job that required me to move again, this time away from the partner I’d just married. It was my dream gig, although my fantasies had somehow omitted the parts about regular 1 a.m. work nights and on-call weekends. Meanwhile, a new protest seemed to erupt every day ― not that my work schedule allowed me to attend ― because every day a new Black person, including one of my best friends earlier this year, was killed by the state. Every day, the grief and the work and the loss compounded.

My coping efforts kept me from having a full breakdown, but eventually I couldn’t focus. I couldn’t sleep. My anxiety got so physically intense that I felt like I might throw up if I got stuck in a prolonged conversation with someone I didn’t know. If I didn’t write down every task, brain fog erased it from my memory.

At the end of my rope, I finally set up a psychiatrist appointment. Even then, because I’d learned to manage my most acute sadness, I was focused on feeling good enough to get work done, like the good capitalist this society encourages us all to be. I still didn’t want to imagine myself with depression, so I convinced myself I might have ADHD. This avoidant misdiagnosis arose from a lack of clarity about how depression manifests.

“There are so many ways depression can show up: disinterest, having a hard time getting through things, anger and irritability, anxiety,” Mclaurin explains. “You can miss it very easily, especially because of stigma.”

Of course, the stigma against mental health treatment is prevalent in every community, but for Black people it can take certain insidious forms. “Where other people can be like, ‘I’m scared I’m going to lose my personality,’ Black people are like, ‘I’m scared that I will stop caring about my people or the struggles that we face,’” Mclaurin says.

In facing the monster I’d made depression to be, I first had to face the fear Mclaurin alludes to: losing my connection to Black people’s pain. On top of this, I had to face the fear of utilizing a system that has been complicit in our oppression, and the fear that I was the weakest link among parents and peers who never had access to treatment and still ostensibly survived. On the other hand, if I pursued treatment and it was successful, I’d have to face the possibility of leaving behind the folks in my community who didn’t have access to this resource, and the survivor’s guilt that would accompany this.

Any good mental health expert will tell you that medication is not an all-encompassing solution ― but it can be an extremely helpful tool. And we should use every helpful tool we can, Mclaurin insists, especially since we are systematically denied so many. It turned out that my other coping tools complemented my meds rather than competing with them. I’d thought that to seek further help was a sign of weakness, but therapy and spiritual work helped me understand that it’s really a practical act of self-preservation.

I used to think my parents and peers survived without help, before unpacking this myth with therapy and ancestor work. I believed it even as I watched my mother die of a cancer that kills Black people with uteruses at more than twice the rate of other groups, even as I saw a burgeoning suicide epidemic end too many of my friends’ lives. I was convinced that living in pain, which inherently drains us of the energy to battle, was actually a sign of putting up a good fight.

By the time my psychiatrist confirmed what I secretly already knew, I understood the need to reject antidepressant stigma on a theoretical level. But I couldn’t shake the feeling that accepting her prescription of Lexapro would mean I was somehow giving up on my own ability to heal.

“Will I have to keep increasing the dose?” I asked anxiously, explosions going off in my head. “Not generally,” she replied. “And if you ever feel like you don’t need it anymore, we can talk about coming off, too.” Hearing her reframe medication as a journey, and not as a type of surrender, morphed this monster of depression into something a little less terrifying.

And who knows? Perhaps my own ability to fight will never be quite enough. Sometimes, I still fear being so weak and broken that I need that magic pill. But I’m beginning to understand that only someone intent on keeping me weak and broken would want me to feel so much shame about my “brokenness” that I don’t fight for my peace. I don’t want to be my own enemy. I don’t want to be the person lobbing those judgment grenades, no matter how strong and put together I’m “supposed” to be to survive. Those who set these ableist, anti-Black rules never cared about our well-being in the first place.

Besides, I’m now a few months into taking antidepressants, and I can confirm they aren’t magical. They might take a while to work, and can have nasty side effects. Some might not work for everyone, and all of them are marketed by profit-driven pharmaceutical companies that have no real interest in our overall well-being. Any new medication should be approached with education and curiosity. And even amid my largely successful journey with antidepressants so far, I still get sad. I still need to work at community building and mindfulness and drinking less. And I still need for us to be free of the systems that have contributed to my pain.

If you’re going through it and looking for a little help navigating your journey, know that there are resources specifically for you. Here are a few of my suggestions:

Inclusive Therapists (and its directory of therapists offering reduced-fee teletherapy)

The Association of Black Psychologists

Therapy for Queer People of Color

Help! My Kid Is Really Scared Of Getting Shots

Read This If You’re Panicking About Polio Headlines

Constantly Looking At Old Pictures Of Your Body? Read This Advice.

‘The View’ Fans Want Rachel Lindsay As A Permanent Co-Host: ‘She Brings A Freshness To The Table’
Testimony in R. Kelly Trial Set to Resume Thursday
Jury Rejects Lawsuit Filed By Family Of Tyre King, Ohio Teen Killed By Cop
Officials Release Footage From Fatal Beating Of Tyre Nichols At The Hands Of Memphis Police
Octavia Spencer Says She Experienced More Racism In Los Angeles Than In The Deep South