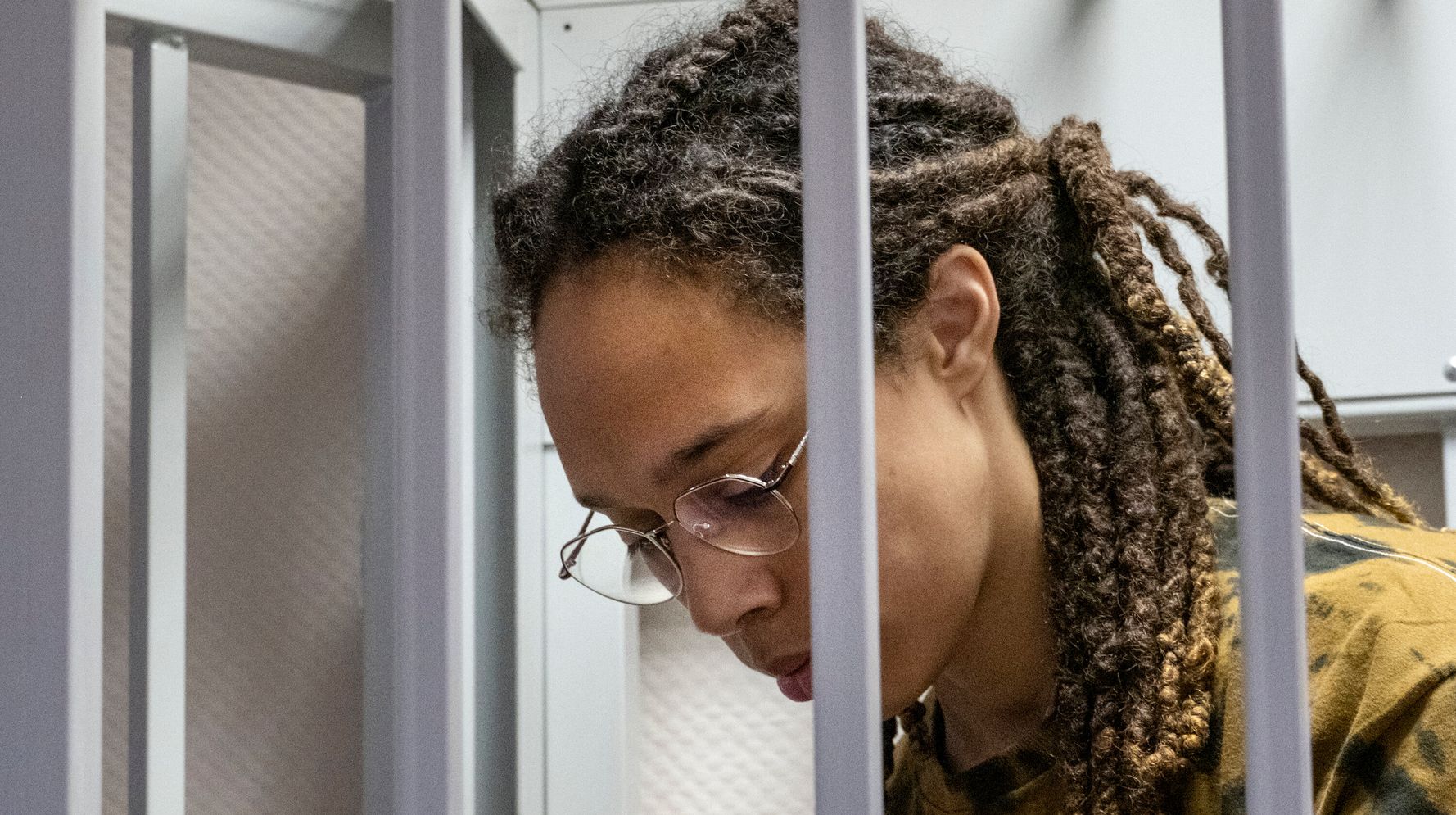 I’ve been grappling with WNBA star Brittney Griner’s arrest in Russia since it happened in February. Not because I’m conflicted about her arrest (I’m not), but people were initially urged not to make public calls for her release, since it might ruin a possible back-channel negotiation.

What I’ve been grappling with is exactly what I feared would happen ― the Phoenix Mercury star would become a political pawn in a game she can’t win. She’s in this position for a number of reasons: She’s a Black woman and a lesbian, thus occupying two of the lowest rungs on America’s social ladder. I know, I said the quiet part out loud. We can try and act like that’s a harsh criticism of America’s social ecosystem, but to do so would be prevaricating. It’s probably best in this discussion that we call things what they are.

The thing is, Griner has been in a Russian prison since Feb. 17, after Russian authorities found two hash oil vape cartridges in her luggage. Griner’s lawyer noted that she had a prescription for the hash, which is illegal in Russia. Russia claimed Griner was a drug smuggler, a serious offense that could carry some 10 years in prison.

Russian Deputy Foreign Minister Sergei Ryabkov warned America that “attempts by the American side to make noise in public … don’t help the practical settlement of issues.”

Two vape cartridges. That’s the issue. But we are calling things what they are, yes?

So then let’s talk about what this really is: Russia needed leverage. This is the kind of game Russia plays. A week after Griner was arrested, Russia went to war with Ukraine ― and by “war,” I mean that Russia bombed the shit out of Ukraine because it wanted that land.

Having Griner in a Russian jail served a purpose: It took a two-time Olympian and made her into a possible bargaining chip. Per The Associated Press: “Russian news media have repeatedly speculated that Griner could be swapped for Russian arms trader Viktor Bout, nicknamed ‘the Merchant of Death,’ who is serving a 25-year sentence in the U.S. on conviction of conspiracy to kill U.S. citizens and providing aid to a terrorist organization.”

But there were a couple of things Russia didn’t account for: America hates Black people, and America hates female athletes. Put them together and you have Black women who excel in sports, a community that America finds it very easy to hate.

Serena Williams and Simone Biles haven’t just been the most dominant women in their respective sports for years. They’ve been the most dominant athletes in sports, full stop. Yet when the conversation comes up about whether they are among the greatest athletes of all time, their accolades are put up against those of the men, followed by tons of pushback.

Serena Williams is the highest paid female athlete with a net worth of $260 million, according to Forbes. This includes advertisements and endorsements as well as winnings. Yet when you look at Roger Federer, who played most of his career around the same time as Williams, his net worth is some $550 million. Why?

Then there’s Simone Biles: a transcendent talent, the most decorated gymnast of all time. Surely her net worth is comparable to that of LeBron James or Kevin Durant? Not because gymnastics is as big as basketball, mind you, but because the advertising opportunities for the most dominant gymnast in the history of the sport are enormous. Biles could do for gymnastics what Tiger Woods did for golf. She’s the Black woman who was out here crushing the competition so easily that she once wore a goat on her leotard because she is the G.O.A.T.; she’s the Black female gymnast who was so dominant, judges had to downgrade her scores because she was pulling moves no one had ever seen. Let me make sure I have enough space for all the zeros I know I’ll need when I write out her salary. She has to have made a killing off her success.

I’ll just type out all the numbers and make sure I carry the one, and… wait, what? This can’t be right.

Simone Biles’ net worth is $16 million.

You know what other sports figure has a net worth of $16 million? TNT Sports announcer Ernie Johnson.

It takes work to ignore Black female athletes so egregiously. It takes forethought and calculation. It takes energy to hate this hard. Just ask South Carolina basketball star Aliyah Boston. Boston didn’t just lead her team to the national title, she was the most dominant player on both sides of the ball in both men and women’s college basketball. Yet during the summer marking the 50th anniversary of Title IX ― the legislation that not only opened the door to women in sports, but effectively prevents sex-based discrimination at any federally funded institution ― ESPN thought it would be a good idea not to invite Boston to this year’s ESPYS, ostensibly because of limited space, and made no plans to show the award she was nominated for.

Like really….who in the room from @espn @ESPYS decided it was a great idea not to invite @MarchMadnessWBB NPOY DPOY….not one person was able to see the uproar this would cause? There’s definitely something wrong with the make up of the room……the fight continue….#WBBSTANDUP

Boston, the defensive player of the year, said in a statement that the hurt, whether intentional or not, landed in a place that felt familiar.

“I’m used to this. It’s just another moment when the disrespect and erasure of Black women is brushed off as a ‘mistake’ or an ‘oversight,’” Boston said in her statement. “Another excuse for why our milestones and accomplishments aren’t a ‘priority’ this time, even now, 50 years after Title IX.”

The issue is so pervasive that Paige Bueckers, the University of Connecticut star point guard who was named best college athlete in women’s sports at the 2021 ESPYS, used her acceptance speech to lift Black women.

“With the light that I have now as a white woman who leads a Black-led sport and celebrated here, I want to shed a light on Black women,” Bueckers said last year. “They don’t get the media coverage that they deserve. They’ve given so much to the sport, the community and society as a whole, and their value is undeniable.”

Bueckers noted that the WNBA handed out awards to some 80% of Black players, but she added that those players have half the notoriety of their white counterparts.

“I think it’s time for change,” she said. “Sports media holds the key to storylines. Sports media and sponsors tell us who is valuable, and you have told the world that I mattered today ― and everyone who voted, thank you. But I think we should use this power together to also celebrate Black women.”

Bueckers went on to acknowledge a number of Black women trailblazers and other important figures.

“To Maria Taylor, Robin Roberts, Maya Moore, Odicci Alexander. To all the incredible Black women in my life and on my teams,” she said. “To Breonna Taylor and all the lives lost, and to those names who are not yet learned, but I hope to share. I stand behind you and I continue to follow you, follow your lead and fight for you guys, so I just want to say thank you for everything.”

Which leads me back to Griner and the joke that is WNBA player’s salaries. In fact, this is why Griner, one of only 11 women in history to win an Olympic gold medal, an NCAA championship, a FIBA World Cup gold medal and a WNBA championship, was in Russia in the first place: money.

WNBA players make a laughable salary compared to their NBA counterparts. The average WNBA salary is $128,369, according to Her Hoop Stats. That’s $471,631 less than Stephen Curry makes per game.

Wait, I wrote that wrong.

What the average of WNBA salaries obscures is that the highest paid player on a team is getting about $200,000, while a WNBA rookie is only making about $60,000. Imagine if Lisa Leslie, one of the most decorated athletes in the sport, was coming out of college and said, “You know, I’m going to bypass the WNBA and work as an X-ray technician, since that pays more.”

And that’s after a recent salary increase that players had to fight for. Prior to that, the max salary was $110,000, and rookies made only $40,000. Russia loves women’s basketball; it’s one of the only countries that pays good money to watch these athletes play. Griner wouldn’t have had to be in Russia if she were paid more for her talent at home.

On Tuesday, President Joe Biden signed an executive order “to bolster efforts to bring home American hostages and wrongful detainees,” even declaring a “national emergency” to bring attention to the matter. But none of this will help Griner, because the 6’9” superstar isn’t considered to be wrongfully detained. She reportedly had the hash oil in her luggage and recently pled guilty to the charges against her. But the Russian legal system isn’t fair. Neither is the treatment of female athletes.

There is a tweet that notes this never would have happened to LeBron James, because he wouldn’t have needed to go to Russia to begin with. He’d never have found himself living in a foreign country, barely able to communicate, just to maximize his earning potential.

But America has a history of degrading female athletes. Remember the joke of a weight room and the conditions that NCAA women had to deal with during March Madness 2021?

Let me put it on Twitter too cause this needs the attention pic.twitter.com/t0DWKL2YHR

And the food given to the women that included some kind of mystery meat:

Compare this to the full-on buffet for the men:

The difference even trickled down to the swag bags:

… nah they tweaking on the swag bag too?!?! https://t.co/tdxx5lOQuc

The NCAA ultimately issued some underwhelming apology about “falling short.” But it takes effort to treat people this poorly. This wasn’t an accident in which all 64 teams in the tournament were forgotten; this is an intrinsic result of what happens when you aren’t even considered.

I know… I’m doing the thing where I’m being reactionary and hyperbolic, which is why I waited to see if America would correct itself. I didn’t rush to write about Griner’s case because I wanted to see how much of an uproar her unjust incarceration would cause. I wanted to wait until everyone else weighed in on the unfairness of her charges, before I could say the quiet part out loud: America hates Black female athletes.

Opinion: The ‘Strong Black Woman’ Trope Is A Trap

Opinion: The ‘Murder Capitol’ Where They Murdered For Capital Was By American Design

Opinion: For Trans People, America Has Become A Place To Flee From