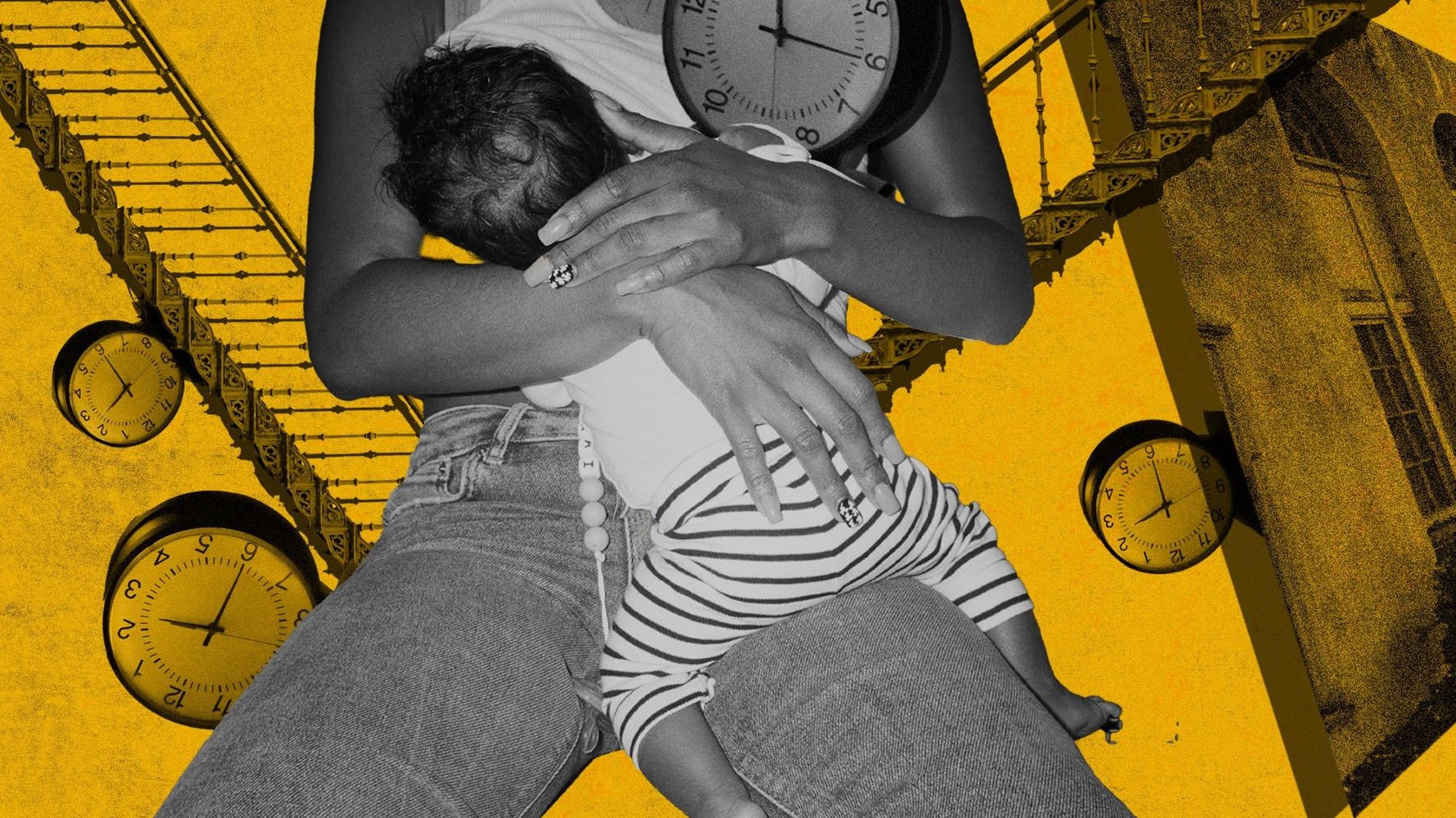 When I was 6 years old, my mother transferred me and my sisters from the predominantly Black public school in our neighborhood to one with a “more diverse” (read: super white) student body in Manhattan. While I wasn’t the only Black girl in my class, I was one of a handful — and I was new, which made me stick out even more. Most of the other Black students attended the school since kindergarten and had already adjusted to an environment structured around values set by white educators and parents.

It was there that I remember my earliest experience with racial microaggressions. For one, classmates laughed at me because I referred to the teacher as “Ms.” — a sign of respect at my previous school — instead of calling her by her first name, which was the norm at this one. Being thrust into this setting made me hyper-aware that I was an outsider, creating an unsettling sensation in my chest that I now know to be anxiety.

There’s a feeling that many people of color learn to live with when they find that they occupy a space that was not intended for them. It’s an aching desire to crawl into oneself and hide. As a little girl, I didn’t have the words for it. My parents knew the feeling but didn’t appear to have the words either. They insisted that my sisters and I would be OK because the school mirrored a society we’d soon be thrown into and expected to succeed in as adults.

I grew up in a household where our American Dream was “Black excellence.” On the surface, Black excellence is simply the celebration of the success of a Black person. At its root, however, it measures a person’s ability to attain mainstream white standards of success despite facing constant adversity. As I understand it now, Black excellence means adhering to respectability politics, a deceptive vehicle that measures my worth by standards set by white men.

There’s an ”emotional tax” that Black Americans pay in their professional lives, which is essentially how the heightened experience of being marginalized affects our health and well-being. It’s also commonly known in our community as the Black Tax, when corporate culture requires us to work twice as hard to get the money and recognition white men do.

Nevertheless, we’ve persisted. Growing up, my friends referred to my family as the Cosbys because my parents were professionals whose careers afforded us upward mobility. My parents raised us to believe that we should aspire to the same. I was encouraged to go to “the best” schools, get the highest grades and present myself in a way that would make me most palatable to future (white) employers. This often left me feeling as though I had to shrink myself by not being too opinionated. It also manifested in an inability to trust my gut and a quest for unreasonable perfectionism. I was seeking external validation, and I was in deep.

After a college degree from a “respectable” school, whether it be an Ivy or HBCU, the checklist of Black excellence follows as: a fancy professional title, no major vices, a home to call your own, a perfect marriage, and then kids to carry on the legacy. And so, as you can imagine, I found myself completely conflicted at my first obstetrics appointment. A kid out of wedlock at 26 was not on the checklist.

During this time, I was two years out of graduate school and still desperately struggling to land an interview, let alone a job. Nothing about the situation I found myself in aligned with the vision I subscribed to for so long. I found it very difficult to get work that matched the vision I had been given for myself. I told myself there was something wrong with me. I wasn’t married, I was still living in my family home, and to make ends meet I took on short-term temp gigs. Even those dried up at the peak of the pandemic. I was barely capable of caring for myself, it appeared, and I had no stability nor a plan in place to take care of another person.

Part of me felt like I was undoing everything I’d worked for and everything my ancestors worked for. Ultimately, my decision to have my son was rooted in understanding life after my dad’s passing. I wanted so badly to be joyous for following an intuitive decision. But I felt like a failure.

Why was it so difficult for me to find joy in starting a family on my own terms? It was in moments of deep reflection that I realized I was living by guidelines meant to protect the way people perceived me while rejecting my most natural expressions of life and my appreciation for it.

Respectability, I realized, required us to trade in our authentic selves for a more palatable version. It requires us to love our Blackness, but only to the extent that it looks and feels good to the society we live in. It defines our innate desires as moral defects. As I processed my decision to give all of myself to motherhood at 26, with no financial plan, a voice popped into my head. It told me I was lazy, I wasn’t trying hard enough and that I was embodying the negative Black mother trope.

Ultimately, it took months of therapy, journaling and relying on my support system to find that I was operating from a pretty toxic brand of Black excellence. It eventually became clear that I could create stability for myself that existed outside of how I looked on paper. I had the ability to reimagine success.

And it was a pretty powerful rebrand — one that many of my peers have been working on. “We often have the “I can do it all by myself and take care of everything” attitude, says Olivia Steadman-Oladipo, a mother and wellness coach. “But we can’t. We need help. We need community.”

While the independent, strong woman mindset has the potential to put a person on a path toward self-sufficiency, the world demands a lot of us. It might be worth rejiggering our priorities as young parents and as Black Americans in general. “What are we actually working towards, and what can we pass on to our children?” says Steadman-Oladipo, who actively tries to define success holistically. “Black excellence is wealth, and not just in the financial sense: in wellness, in health, in sustaining our bodies and our legacies, and passing that to our children.”

What I’m learning is that a reframing of success involves keeping the parts of the checklist that work and discarding the others that dismiss our cultural or individual values. “Black excellence, to me, is what Black people initially chose to move forward with in the face of feeling like they had to go the extra mile. I think it’s a positive reframing of something that was initially negative,” says Jessica Orenstein, a Black woman who’s a behavioral scientist and mental health advocate. This is true, as it helps many of us push through adversity. “But I also think it’s added a lot of pressure to how we uphold certain norms.” This pressure often makes it difficult for us to feel relaxed and believe that we’ve done our best.

Our generation has a big part in dismantling this shrinking of ourselves. In fact, social media is largely shifting younger generations’ understanding and attachment of Black excellence 1.0. “They’re not necessarily looking at white peers or Latinx peers, they’re looking at Black peers who are making bank on TikTok or Instagram, and they’re, like, I need to be like them… that is their definition of Black excellence,” says Orenstein.

She points to a movement on social media that she’s incorporating into her own beliefs about success. “Let’s promote Black mediocrity … and ‘Black mediocrity’ is not to say it’s without excellence, but when we’re pushed to do more and be more, it always turns out excellent,” Orenstein says. “If we put that focus into self-care, even our mediocrity is going to be excellent.” Honestly, this feels like self-love at its most radical.

For me, it’s a combination of factors, including the ease of seeing various Black experiences on social media, that’s allowed me to grow. I am prioritizing agency over my body, my money, my morals and my time, and it’s comforting to know I’m not alone in this.

Leaning into this new experience has required me to find comfort in living in the moment. One of my greatest joys is watching how naturally my son develops in the absence of imposed societal standards. He is so naturally himself. He’s messy, he’s emotional, he’s joyous, he’s loud and unafraid to express himself. He is all the things I am learning to be more of.

It’s been a year and a half since I had my son, and while there are days when I struggle to celebrate the 24/7 grind of motherhood, I’ve leaned into the joy and chaos. When I find myself tripping over limiting beliefs about success, I remind myself of three things: There is power in care, there is power in mindfulness and there is power in love. This is the version of Black excellence I’m passing down to my son.

Charles Barkley: ‘If You’re Gay Or Transgender, I Love You!’

10 ‘Pink Flags’ To Pay Attention To In Relationships

The Dangers Of Having States Decide Pregnant Women’s Rights