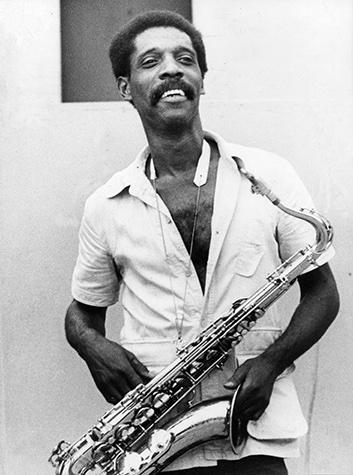 Jazz musician Donald Ulysses Walden was born to Gracie Buck and Louis Walden on July 12, 1938. The family lived in Clarksville, Tennessee from 1938 to 1946. Being musically gifted, Walden’s mother took him to see bands that toured the South. After seeing the Silas Green Band from New Orleans, a popular band of the era, Walden at age eight decided that he wanted to become a “stand-up saxophone player.”

In 1960, Walden followed many Detroit musicians to New York, during a time known as the “Loft Movement.” By 1966, however, he returned to Detroit to pursue other opportunities in music including in Rhythm and Blues. In 1968, he played in Aretha Franklin’s band and is credited on her album, Aretha in Paris. Walden also toured with Stevie Wonder, The Temptations, and The Four Tops.

In 1981, Walden created the original Detroit Jazz Orchestra (DJO), which included a 16-piece string section and which received much national critical acclaim. In 1985 he received the Michigan Governor’s Art Award and in 1996 he became only the sixth Detroit musician to receive the Jazz Master Award from Arts Midwest. Other accolades of note include the Legends of Jazz International Hall of Fame Award and the Alain Locke Award.

Walden’s most influential recording was “Yardbird Suite” which he released in 1990 at the Detroit International Jazz Festival as a tribute to Charlie Parker. “Yardbird Suite” brought together a big band including 18 strings, a 30-voice choir, and featured conductor Coleridge-Taylor Perkinson, and soloist Dizzy Gillespie. Walden produced three independent albums: A Portrait of You (1992), A Monk & A Mingus Among Us (1998), and Focus: The Music of Tadd Dameron (2003). As a jazz educator, he also taught at the Center for Creative Studies, Michigan State University, Oberlin Conservatory of Music, and the University of Michigan.

Donald Walden passed away in Detroit on April 6, 2008, at the age of 69. Walden is survived by two daughters, Deidre and Aisha Walden.