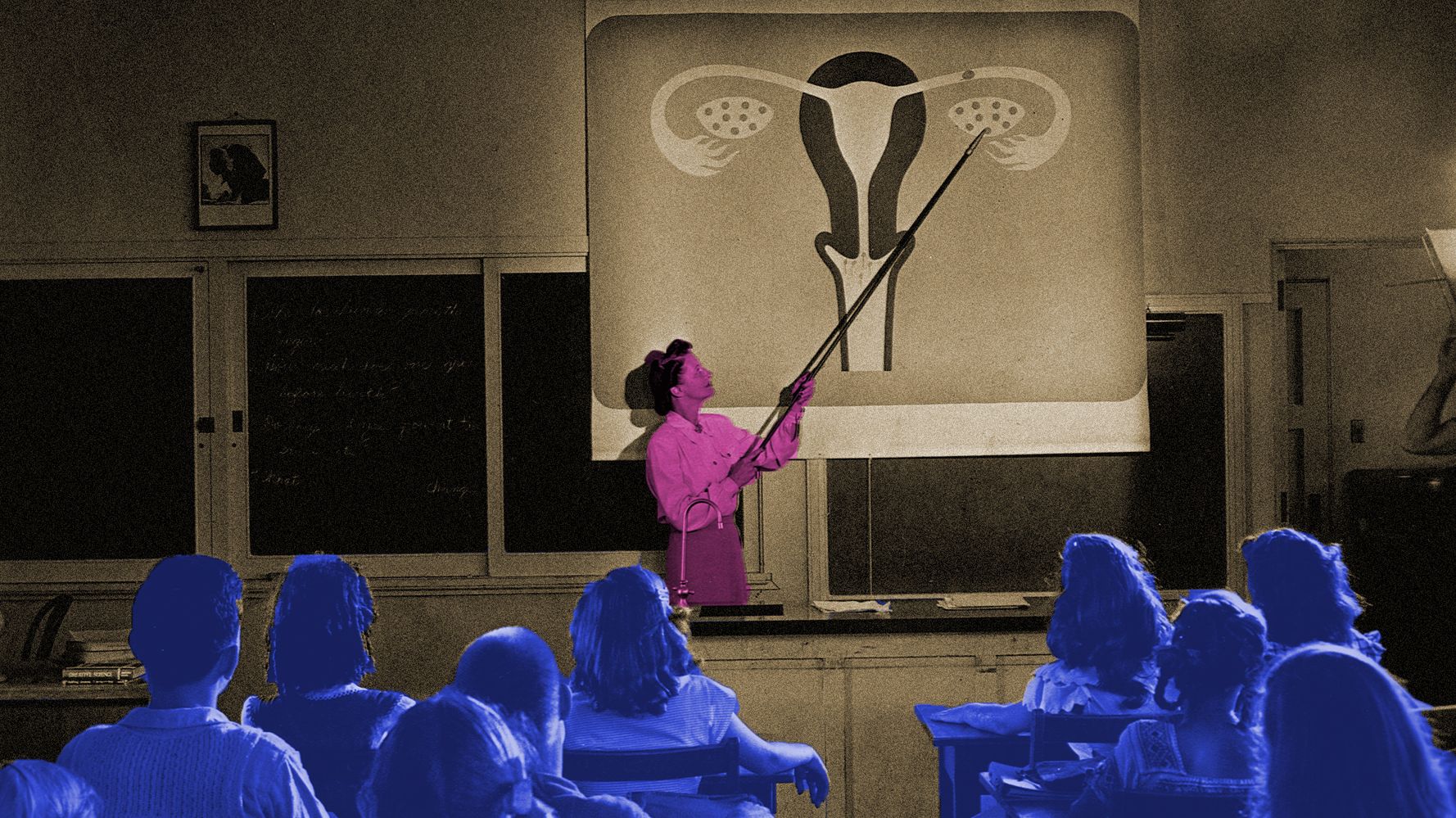 Nora Gelperin, a sex educator and director of sexuality education at Advocates for Youth in Washington, D.C., has watched, dismayed, as politicians, pundits and activists have suggested that educators like her are “groomers” over the last few months.

Much of the rhetoric is tied to HB 1557, Florida’s so-called “Don’t Say Gay” law. Advocates of the new law say teachers who educate students on gender identity and sexual orientation are trying to “groom” and sexualize children. Republican Gov. Ron DeSantis’ top communications aide went so far as to suggest that anyone who opposed the state’s new law was a “groomer.”

In April, in the midst of Teacher Appreciation Week, conservative commentator Steven Crowder tweeted, “The best way to appreciate the good teachers out there is to point out and punish the others who are out trying to corrupt and groom our children.”

U.S. Senate candidate J.D. Vance of Ohio defended lumping teachers in with groomers, too: “If you don’t want to be called a groomer, don’t try to sexualize 6-, 7-year-old children.”

Sex education, specifically, is in the crosshairs, too, as it’s always been. Some parents are pulling their kids out of sex ed classes, including parents in Worcester, Massachusetts, as part of its “Opt Out of Pornographic Sex Education” campaign.

For Gelperin, it’s sad to see opponents of sex education not only slander sex educators but also create confusion around what grooming actually is.

“Grooming is when adults work to gain children’s trust for the purpose of sexually abusing them — and, as a result, the boundaries and manipulation from groomers make children less likely to report the abuse,” Gelperin told HuffPost.

“Sex educators and teachers are dedicating their lives to ensuring young people are safe and healthy, only to be casually accused of appalling crimes by Twitter accounts and politicians,” she said.

“It’s harmful and misguided at best, and cynically endangering kids for political gain at worst,” said Friedman, who is the vice president of strategy at SIECUS: Sex Ed for Social Change, a group that advocates for progressive sex education policy and implementation across the country.

“Where are these people when it comes to 10-year-olds who are in fact abused and need abortion care?” she added. “Where are they when their own political and cultural leaders are credibly accused — sometimes over and over again — of being sexual abusers?”

Educators have been the target of a number of political attacks over the last few years. Prior to the outrage over “grooming” in schools, teachers were targeted by the far right for allegedly teaching critical race theory, an academic framework that examines how policies and the law perpetuate systemic racism, a theory that is largely taught in law school.

Now it seems “grooming” is the charge. (Despite the attacks, a recent poll by NPR and Ipsos found that a majority of American parents of all political stripes are pretty happy with their local schools.)

“They’re creating confusion about what ‘grooming’ and child abuse actually entails, and when there’s confusion, it’s harder for adults to notice actual abuse and harder for kids to report,” Friedman said.

As for claims that sex ed needlessly sexualizes kids, research has shown that comprehensive sex education programs can actually be effective in delaying sexual activity among teens and encouraging use of contraceptives, such as condoms.

Comprehensive sex education isn’t the norm in the U.S., though.

Nationwide, just 29 states and the District of Columbia require public school students to receive any form of sex education, and only 18 require such teachings to be medically accurate.

“Every single legitimate study about the effect of age-appropriate, comprehensive sexuality education shows positive outcomes for the kids who are lucky enough to take these classes,” said Amy Lang, a sexuality and parenting educator in Seattle.

“When you prevent children from learning about sexuality, you set them up for failure,” she added.

Below, sex educators like Lang share more about what students learn in sex ed and break down some of the ways comprehensive sex education could help kids identify harmful predatory behaviors.

The lessons are age-appropriate.

Sex education varies around the country, from state to state and from school district to school district. But if the curriculum follows the National Sex Education Standards outlined by SIECUS, the emphasis for younger students is on basic, kid-friendly topics.

Lessons for kids in grades six through eight builds on this
foundation, said Michelle Hope Slaybaugh, the director of social impact and strategic communication for SIECUS.

“In middle schools, the lessons are focused on understanding consent within relationships, healthy communication, social media use and puberty,” she said.

Comprehensive sex ed gives students the vocabulary to identify their body parts and name when they are in danger.

Carlee Taga is a teacher at AUL Denver in Colorado, where she teaches health and science.

“I feel very lucky to live and teach in a state where sex education must be comprehensive ― starting in elementary school and continuing throughout middle and high school ― and inclusive, including LGBTQIA+ topics and consent/sexual assault,” she said.

Still, she said, “even in my progressive state, sex education is not mandated.” (While some students may take sex education classes, at most schools in Colorado it is not a graduation requirement.)

Taga firmly believes age-appropriate sex education needs to start early because it gives students the vocabulary to identify their body parts and name when they are in danger. (That means using the actual words for body parts, no euphemisms like “weewee” that could create confusion if kids need to bring something up with a trusted adult.)

The lessons on bodily autonomy are especially important.

Simply put, bodily autonomy is the right of each person to govern what happens to their own body, without external influence.

“If children have been taught that they have bodily autonomy, they will not be so easily preyed upon by those who would count on childhood ignorance to inappropriately cross boundaries,” said Sherri Cook, the executive director of Wholly Informed Sex Ed, a nonprofit community outreach program originating in First Unitarian Church of Dallas.

“Knowledge is power, and knowing that it’s OK to say no to things that just don’t seem ‘right’ gives children much more protection,” she told HuffPost.

They don’t hear about “grooming” in an explicit way.

Programs for children don’t typically name ‘grooming’ as a behavior to watch out for, since preventing abuse should always be the responsibility of adults, not children, said Melanie Davis, a sexuality educator with Our Whole Lives (OWL), a comprehensive sexuality education program co-developed by the Unitarian Universalist Association and the United Church of Christ.

That said, “comprehensive, age-appropriate sexuality education does help children learn what healthy relationships and behaviors are,” she said. “They learn they have a right to say no when talked to or touched in certain ways, and that they have numerous trusted adults they can turn to with questions or concern.”

For older kids, the lessons are more nuanced.

Taga currently teaches high school students, so the curriculum for sex ed is based in real-world situations.

She breaks down concepts like consent in ways that will get through to them; it’s one thing to talk about sexual assault in a hypothetical sense (“no means no”), but using examples from pop culture is a lot more helpful.

“Students can recognize that when Pitbull sings, ‘She says she won’t but I bet she will,’ that is not consent,” she said.

They also talk about trickier subjects, like consent in the digital world.

“Talking with someone online removes the cues that can help to determine if someone is uncomfortable ― intention isn’t always as clear,” she said.

Sex ed helps kids feel comfortable talking about sex with the trusted adults in their lives.

“When sex is shameful, it goes undiscussed. This includes sexual assault,” Taga said. “Sex education that discusses all aspect of sex ― biology and safety and pleasure in addition to sexual assault awareness ― can remove this discomfort and really help to address the problem.”

Women Pay Me To Teach Them How To Give Great Head. (And Their Boyfriends Thank Me.)

You Can Now Dial 988 For Mental Health Help. Here’s What To Know.

If Your Pee Looks Or Smells Like This, It’s Time To See A Doctor

Simone Biles Prioritizing Her Mental Health After Larry Nassar Scandal
8 Reasons We Will Always Love Whitney Houston
‘Sweet Life: Los Angeles’ Star Tylynn Burns On Why She Got An Abortion
Keke Palmer Questions Why Plastic Surgeons Can’t Use ‘The Beautiful Skin From My Ass’ To Cure Acne
Patti LaBelle Addresses Drama With Diana Ross & The Supremes