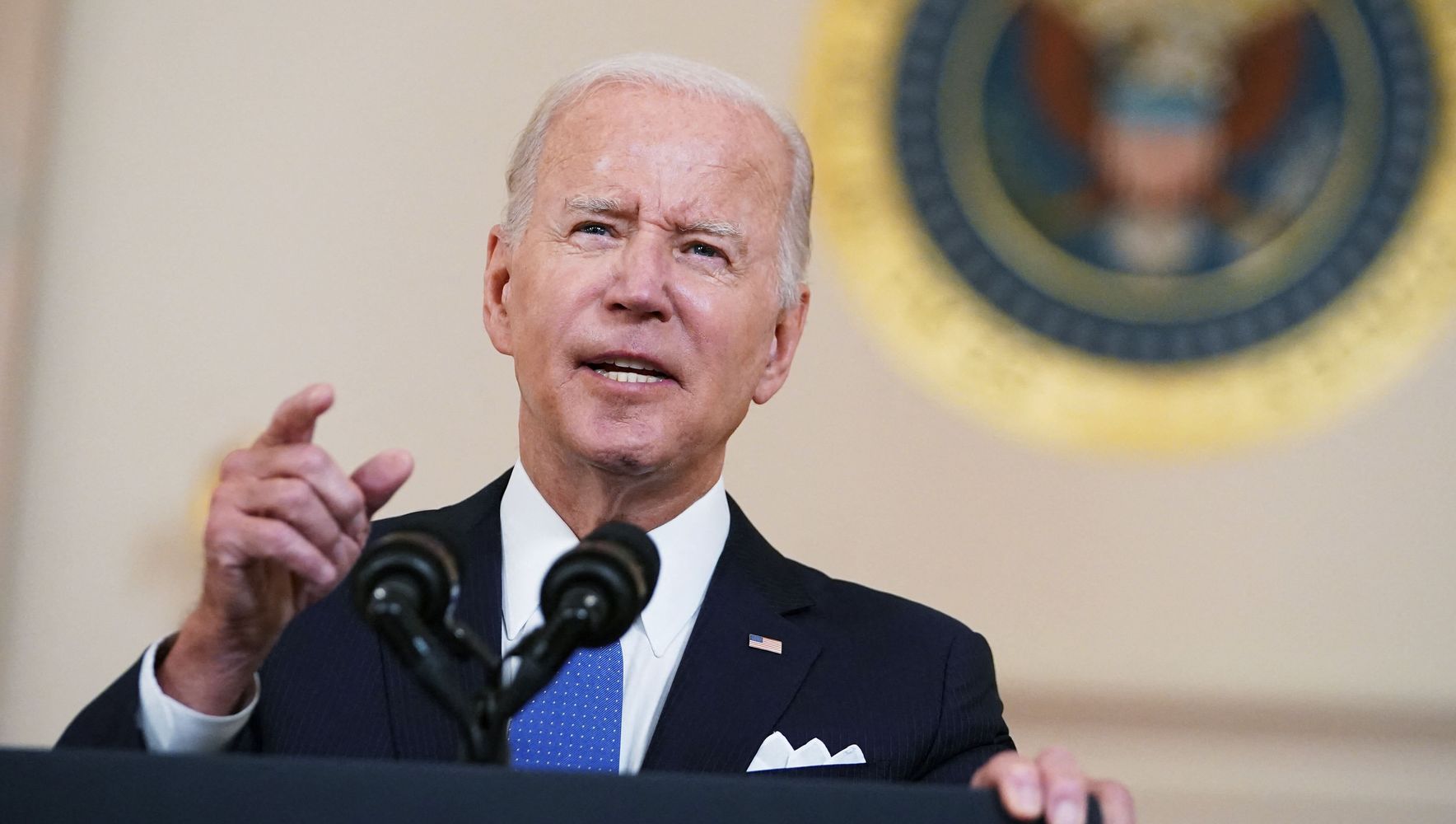 President Joe Biden called on the Senate to weaken the filibuster to protect abortion rights on Thursday morning, a step praised by Democrats who remain worried about a rudderless response from the administration to the Supreme Court’s decision to overturn Roe v. Wade.

“I believe we have to codify Roe v. Wade into law and the way to do that is to make sure Congress votes to do that,” Biden said in Madrid after attending the NATO summit. “And if the filibuster gets in the way … we should be requiring an exception to the filibuster for this action to deal with the Supreme Court decision.”

But despite this announcement, which came after several days of Vice President Kamala Harris suggesting they would not attempt to modify the filibuster, party officials and advocates fear his administration is not doing enough to drive home a political message or craft a policy response, especially considering the leak of the Supreme Court’s decision gave the White House months to prepare. Biden has spent much of the week since the ruling, which was issued last Friday, traveling to G-7 and NATO summits in Europe, limiting his ability to directly impact the domestic political situation.

The White House is unlikely to take steps progressives have called for to protect abortion rights, including building abortion clinics on federal land or military bases, viewing them as logistically and legally unworkable. It has long ruled out other steps, including expanding the size of the Supreme Court, and continued opposition from Sens. Kyrsten Sinema (D-Ariz.) and Joe Manchin (D-W. Va.) means Democrats lack the votes to make major changes to the filibuster, even if Biden has now lent his support.

On Wednesday, 33 of the Senate’s 50 Democratic-aligned senators wrote to Biden asking him for unspecified “bold action.”

“You have the power to fight back and lead a national response to this devastating decision, so we call on you to take every step available to your Administration, across federal agencies, to help women access abortions and other reproductive health care, and to protect those who will face the harshest burdens from this devastating and extreme decision,” wrote the senators, led by Patty Murray (D-Wash.).

White House officials said the law and small congressional majorities limit what Biden can do, and so his calls to vote for Democrats in November are the best answer. White House officials have held weekly calls with leading abortion rights organizations. The White House is also playing up the threat of Republicans passing a national abortion ban if they win control of Congress.

“The President is being straight with the American people, taking major actions under executive authority as he fights this extreme decision very hard, but being clear and honest that only Congress can fix the situation,” a White House official said. “That’s why this choice between a national ban and more radical attacks on basic freedoms on the one hand, versus standing up for those rights is so important.”

White House officials pushed back on the idea they were afraid of the politics of the situation or of impugning the court’s integrity, noting Biden has touted polling about the popularity of abortion rights and said the court was engaging in “outrageous behavior” by overturning the 50-year precedent and threatening Americans’ right to privacy.

“It’s a serious, serious problem that the court has thrust upon the United States,” the president said in Madrid.

Many liberal groups want more of that from the president, and to focus his rhetorical support on theoretically persuadable members of Congress. The Progressive Change Campaign Committee, a group often aligned with Sen. Elizabeth Warren (D-Mass.), wrote in an email to its members that Biden needed to “use the bully pulpit” to pressure Sinema and two Republican senators who support abortion rights, Susan Collins of Maine and Lisa Murkowski of Alaska, to vote for a filibuster carve-out.

“Now is the time for President Biden to push for Court reform and elimination of the filibuster so that Congress can do the work of the American people ― on abortion rights, democracy reform, gun safety, and legislation to save our planet from climate disaster,” the group wrote. “He must meet this moment or he will be complicit in the further erosion of our democracy.”

“He must meet this moment or he will be complicit in the further erosion of our democracy.”

When Biden returns to the White House on Friday, he will meet with governors, both in person and virtually, who are working to protect abortion rights. It’s not clear exactly which governors will attend the meeting, but Biden told reporters in Madrid he would “have announcements to make then.”

Biden has already said his administration will work to protect people who cross state lines to obtain abortions — something GOP state legislators hope to criminalize — and to increase access to medication abortion. When asked in Madrid if he was considering issuing a public health emergency — something many Democrats have called for — Biden did not answer directly.

“I feel extremely strongly that I’m going to do everything in my power which I legally can do in terms of executive orders, as well as push the Congress and the public,” he said.

One idea the administration isn’t talking about is establishing abortion clinics on federal lands or on military bases in states that ban abortion, an idea pushed by Warren and Rep. Alexandria Ocasio-Cortez (D-N.Y.), among others. The administration fears that would do little to protect either women seeking abortions or medical providers from state laws, noting states could potentially criminalize visiting the lands or simply arrest patients after they leave.

“​​It’s not right now what we are discussing,” Harris said on CNN earlier this week.

Some progressives feel the president has been missing in action when it comes to defending abortion care and failed to lay the groundwork for a more fulsome counter-offensive once the Supreme Court’s decision came out. His speech in the wake of Roe’s demise was his first address to the nation on abortion rights, even though the onslaught of anti-choice attacks have been going on throughout his presidency.

“This has been a crisis for a year and a half and he waited until it was over to say something. That is so disrespectful to every single person in this country who’s had an abortion and needs an abortion,” Renee Bracey Sherman, founder of We Testify, an abortion storytelling group, told HuffPost the day the Supreme Court decision came down.

Biden had never said the word “abortion” until the Supreme Court draft leak in the Dobbs v. Jackson Women’s Health Organization case in early May showed the court was poised to fully overturn Roe. Before then, Biden had used the word “abortion” only three times as president, and only in written remarks.

Reproductive rights organizations have called on Biden to invite abortion storytellers to the White House, federalize clinics to keep them open and make medication abortion available over the counter, among a slew of other things. Many of the more established pro-choice organizations, like Planned Parenthood and NARAL, have used this moment to focus on midterms, reminding people to get out and vote.

But a lot of protesters and smaller abortion rights organizations no longer see voting as a solution.

“I received a text message from Joe Biden’s campaign saying that the Supreme Court had overturned Roe v. Wade, and that it was my responsibility to then rush $15 to the Democratic National Party,” Zoe Warren, a 19-year-old activist with Rise Up 4 Abortion Rights, told reporters at a Saturday rally in front of the Supreme Court. “I thought that was absolutely outrageous. … If they’re going to keep campaigning on this point, they should actually do something about it.”

Republicans in Congress, as well as some heavyweight anti-abortion organizations, have also discussed a nationwide ban on abortion, which would be politically difficult but not impossible.

Californians Will Vote On Enshrining Abortion Rights In State Constitution

Sinbad Still Learning How To Walk After Stroke In 2020
Why AfroTech 2022 Was My First, But Not My Last
Ashanti Reveals She ‘Made Some Calls’ To Get Retaliation Against Man Who Abused Her Little Sister
Joe Biden Can Confirm Even More Judges If Democrats Win Georgia’s Senate Race
Grand Jury Indicts White Men Accused Of Firing At Black FedEx Driver In Mississippi