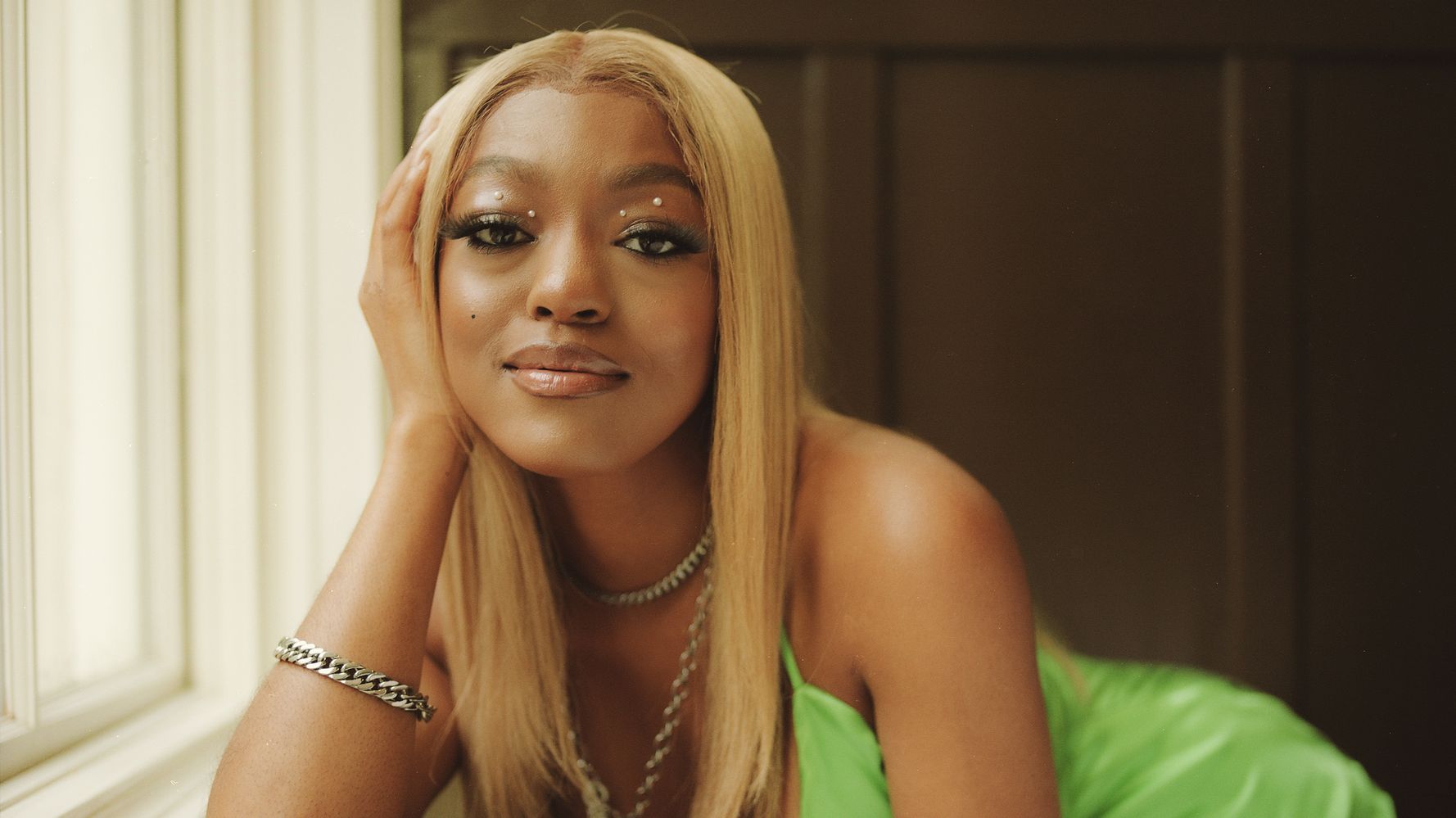 I Run This is a weekly interview series that highlights Black women and femmes who do dope s**t in entertainment and culture while creating visibility, access and empowerment for those who look like them. Read my Kandi Burruss interview here.

Azriel Clary’s voice is sweet and ethereal yet commanding when she joins our Zoom call. The 24-year-old singer has a busy day ahead of her but is optimistic about it. It will be the first time she walks the red carpet as an artist at the Black Music Honors in Atlanta.

“A lot of multitasking, sorry for that,” she said about her undone hair and lack of makeup — she’s just starting the process of getting her look together for the evening.

I assured her there was no need to apologize. Not only was there nothing wrong with her natural state, but it felt symbolic of her newfound comfort in vulnerability that she allowed me to see her as she is. Still, she turned the camera off for the remainder of the interview. Girl, I definitely get it.

Azriel is taking control of her path with total agency and clarity. Within the last several months, she’s finally been able to launch the music career she dreamt of since she was 4 years old. She released her first single “Liar, Liar” in fall 2021, followed by “Sounds of an Angel” and “Inside Me” in the spring. The artist, who goes by her first name, is gearing up to release her debut EP, “Eat Your Heart Out,” this summer. She’s been waiting for this moment for a very long time.

“This is probably the happiest I’ve ever been in my life,” she said. “I’m accomplishing things. I’m outgrowing old habits, and it’s really just a great place to be in.”

Many may know Azriel as one of R. Kelly’s survivors. She met the disgraced singer at a concert when she was 17. He convinced her to audition for him, saying he could help kickstart her career in music. Azriel left school, her family, her friends and her old life, believing that Kelly would help her make it big. Instead, his broken promise turned into a five-year relationship full of abuse, lies, isolation, manipulation and gaslighting. He even coached her on what to say during interviews about his allegations.

And she was not the only one. Kelly’s nearly 30-year cycle of abuse came to a head when several survivors, including Azriel, took the stand in Brooklyn for a 2021 federal trial against Kelly, where he was convicted on racketeering charges.

Though Kelly’s abuse is a part of Azriel’s story, she’s reminding — and in many cases, informing — the world that that part of her story doesn’t define her. And she’s finally able to use her music to do so.

“I think the beauty in setbacks is that when people go through setbacks, it usually reverts that person back to exactly who they are and what it is that they know and what it is that they want loved,” she said. “Everybody tries to make a setback such a negative, but I really think that it allows a person to go back to their most humble version of themselves. And it’s almost like a reset or rebirth.”

Azriel started learning music at 12. Her parents made sure she had access to vocal coaches and lessons when they realized she was serious about her aspirations. She began playing instruments and adding other musical extracurriculars to her plate when she entered high school in Orlando, Florida. She learned notes and proper voice control that she still uses today.

“I think it plays a huge part in my sound now, and just being able to explore with my voice, which a lot of people don’t have the luxury of doing because most people learn only one way in a church, how to belt and how to do riffs and runs,” she said. “But for me, personally, learning the actual terminology and music theory behind music is able to help me get so much further.”

Getting back to her music wasn’t an option for Azriel; it was a calling. She’s using the early days of her career to truly hone in on her sound and take as many creative liberties as she wants.

On “Eat Your Heart Out,” which Azriel wrote, she tells the story of her healing, sexual empowerment, agency and confidence. She said she wants people to listen to her EP and know that regardless of what you thought, you don’t know her like that. She invites her listeners to get to know her through her music without the expectation of being a perfect human being.

“I think the story that I tell with this EP is really just not to give a damn,” Azriel said. “And it just shows a different side of me. Clearly, nobody knows me; first and foremost, let me say that: Nobody knows who Azriel is. Everyone just knows a very frightened version of me, a side of me that was very much vulnerable, taken advantage of, a very young, naive side of me. And so I think from this, people will be able to start to see that I’m edgy.”

The EP features tracks that range from upbeat bops to sexy slow jams to vulnerable ballads. She wrote several songs on the project by herself and also co-wrote with songwriters Retro and GK on three songs. She said “Inside Me” wasn’t originally supposed to be on the album because she was nervous to put out a song about her sexuality. When her manager heard it and sang its praises, she decided to include it.

“I was scared because I was like, ‘Well, I’m confident in my sexuality, but I don’t necessarily think the world is ready to accept me and who I am.’ And he was like, ‘Well, it doesn’t matter. You created this. This is your creativity. This is what makes you happy. You can’t hide your talent,’” she recalled. “And that’s really the mindset that I have. And then I was just like, ‘You know what, you’re right.’ So we started tapping more into that sound.”

“Nobody knows who Azriel is. Everyone just knows a very frightened version of me, a side of me that was very much vulnerable, taken advantage of, a very young, naive side of me. And so I think from this, people will be able to start to see that I’m edgy.”

Through her music, Azriel is hoping to show more women what it looks like to persevere and maintain your authentic self even after enduring trauma. She said Rihanna has been an example of that for her. Azriel is leaning into that same self-assuredness.

“Everyone messes up. Whether it’s public, whether it’s behind closed doors, everyone goes through things,” Azriel said. “And I think it’s very important for women to know that a mistake does not define you. It doesn’t stop you. You can continue to redefine yourself. I can continue to redefine myself even 10 years from now. It’s just all about evolving. We all have different stages of life. And I think it’s so important for young women to know that life is about evolution. And even the version that you’re in today, you will eventually outgrow. And that’s just what I think is so important to showcase.”

At the moment, Azriel defines herself as passionate, angelic, confident, courageous and as a “person that breaks all barriers and goes against the odds.”

Her budding music career is certainly a testament to that. Through it, she’s not only been able to find a higher purpose, but healing as well. She said she had to go deep during those long nights in the studio and sessions during quarantine.

“Through music, I have the luxury of going in there and just screaming on a track or crying on a track or yelling on a track or just doing nothing but ad-libs on a track. And then even though those things aren’t released to the public, it has allowed me, has given me so much freedom to release so much that I think that is the beauty in me creating music and how it helped me heal,” she said.

“I’m still finding myself, I’m still figuring out stuff. Who I was last year doesn’t reflect who I will be next year and what sound will be inspired next year,” she continued. “And I think that’s the beauty in being able to create. But overall, I definitely feel like my music keeps me grounded. It’s that breath of fresh air when I need it. And that’s just my little outlet that I have, and I’m happy to have it.”

Azriel hopes her forthcoming EP will make folks feel empowered more than anything — especially women who have experienced strife and may feel undeserving. “You absolutely deserve to love every single part and crevice of yourself inside and out,” she said.

Her dream collaborators include Kali Uchis, Kanye West, and she’d love to have both Beyoncé and Rihanna on a track together. And though she’s mainly in the R&B and alternative R&B lane, she’s open to experimenting with other genres, including EDM.

It’s still early, but she’s already thinking about her legacy.

“Because, at the end of the day, what I do is not for anyone else, and I think that it’s so important for women to know that it is OK to break down those barriers. It’s OK to stand up for yourself and be that badass that you envision yourself being. It doesn’t matter who you are; be as confident and as unapologetically authentic to yourself as possible. Be brilliant. Be loving to yourself.”

My Daughter Almost Died At Summer Camp. Here’s What I Wish I Told Her Before She Went.

I Suspect My Father Died With A Big Secret. I Regret Never Asking Him For The Truth.