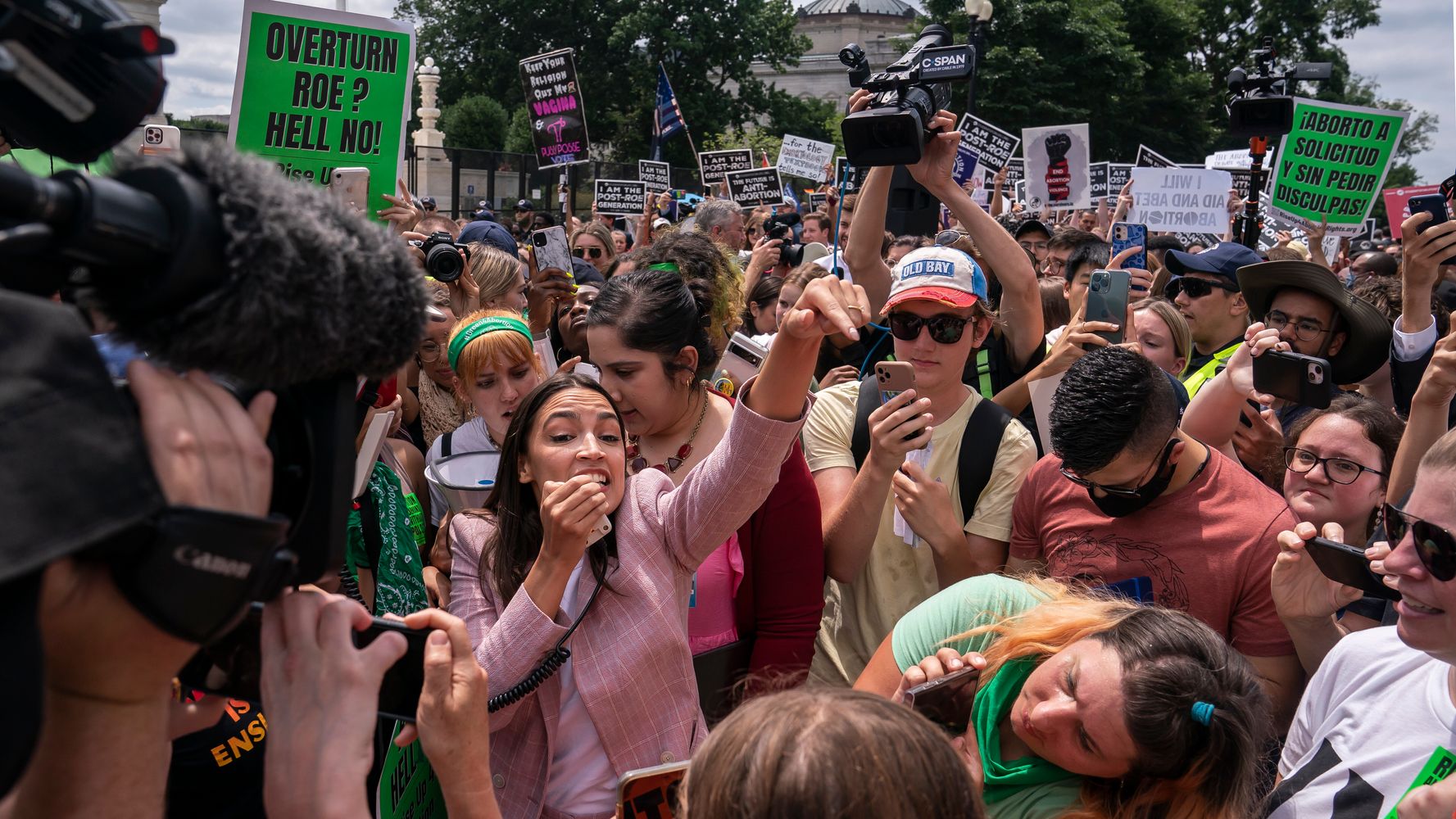 WASHINGTON, D.C. ― Hundreds of furious and devastated protesters flocked to the Supreme Court on Friday morning as news broke of the court’s decision to overturn Roe v. Wade, ending the constitutional right to an abortion.

The scene was initially surreal. On one side of the crowd, people were celebrating Roe’s demise by blasting club music and firing up a bubble machine. Just feet away, a much larger group of people were outraged, with several women in tears and vowing to fight on.

“Do not succumb to despair!” shouted one abortion rights organizer, as the thumpa-thumpa-thumpa of a dance track carried on in the background.

By early afternoon, dozens more people showed up wearing stickers and T-shirts declaring support for abortion rights. They stood together leading chants about the need to protect women’s rights, and waving homemade signs with messages like “Hey Alito, fuck you” and “No reproductive rights for women = no sex for men.” (Justice Samuel Alito wrote the majority opinion in Friday’s ruling.) Along the periphery of the crowd, a handful of counterprotesters with anti-abortion signs stood by.

“Off with their dicks” pic.twitter.com/nJeNWUfJjF

Rep. Alexandria Ocasio-Cortez (D-N.Y.) was one of the few politicians to join the crowd. Speaking through an amplifier, she acknowledged the frustration many people had expressed that day about the limits of electoral politics.

“This is not something that’s going to be solved in a day, or in an election, or in a year, because we’ve got to strap in,” Ocasio-Cortez said. “This is a generational fight.”

“We have to fill the streets. Right now, elections are not enough,” she continued. “I’m not going to be here and tell you to drop out, because we need to show up everywhere. We need sand in every damn gear … Elections alone are not going to save us. We need to show up, yeah, at the ballot box, but that’s the bare minimum.”

Police were on the scene, too, some of them having marched up in militarized gear from the Capitol building across the street. The Metropolitan Police Department and Homeland Security Emergency Management agency announced in a joint statement that they had initiated “full departmental activation” until next Tuesday in preparation for demonstrations.

It wasn’t a particularly tense scene outside the court, though. If anything, the prevailing mood among supporters of abortion rights was simply one of defeat, and an uncertainty about what to do now.

Bristol Williams, a 43-year-old Black woman, was among those outside the courthouse. She was in town from New Orleans to visit her sister. Friday’s Supreme Court decision means that abortion is now illegal in her home state, thanks to a “trigger law” that took effect the moment Roe v. Wade was overturned.

Williams said she’s been doing her part to push Louisiana Gov. John Bel Edwards, a Democrat, to protect reproductive rights. But since local officials in her state are mostly Republican, she said, Edwards just falls in line with them.

“Our health care disparities are already horrible, so now you are talking about people who are … having issues, like maybe to get an abortion, and you now have these hurdles as well?” she said. “I don’t know what it is going to look like for us.”

One woman, who gave only her first name, Alison, stood alone near a group of abortion rights supporters leading chants. She was openly weeping.

“This is a really sad reason to be here,” she said, noting that she lived in St. Louis and just happened to be in Washington for a work trip.

“I just feel unseen and unloved in my own country,” Alison said. “I wanted to come here today to look at all of our country’s historic monuments, and now I just feel a lot of shame even wanting to.”

Asked if she had a message for the people in the Capitol, just across the street, who helped put the justices on the court who voted to overturn Roe v. Wade, she had one ready.

“Shame on you,” she said. “And treat everyone better, please.”

Elizabeth White, a 30-year-old Black woman who lives in D.C., was leading chants with a megaphone, calling for justice for women. She emphasized how disproportionately the court’s decision will hurt Black, brown and transgender women. Meanwhile, she said, the men on the court making decisions about women’s bodies will always have the money to help the women in their own lives get abortions when necessary.

“They are going to pay for their mistresses to get abortions,” White told HuffPost, “while we won’t be able to do that.”

Sunsara Taylor was also talking into a megaphone, urging the crowd to take to the streets in protest of the court’s decision. She wore a green bandana around her neck, which she told HuffPost was a nod to Argentina’s “green handkerchief” movement, in which women flooded the streets and succeeded in forcing political leaders to legalize abortion in 2020.

“Democrats have never fought for or defended abortion rights the way they need to,” said Taylor, who helped found the group Rise Up 4 Abortion Rights in January.

“Why are we losing abortion rights? Because people are staying home,” she continued, her voice rising. “Come in the streets, and stay. If we had hundreds of thousands, if we had a million people with green, surrounding the Capitol for a week, every day, maybe it would take longer. But it might not. We could compel them to act at the federal level to enact legislation or some other measure to protect and restore legal abortion rights across this country.”

Asked what she makes of Democratic leaders in Congress saying the best way to protect abortion rights is to vote for Democrats in November, Taylor scoffed.

“Abortion rights were won through fierce struggle in the streets. You don’t get your rights by waiting for these Democrats,” she said. “It never has happened that way.”

“Biden won’t even say the word ‘abortion,’” she added, which was true until last month. “Relying on them is a losing strategy.”