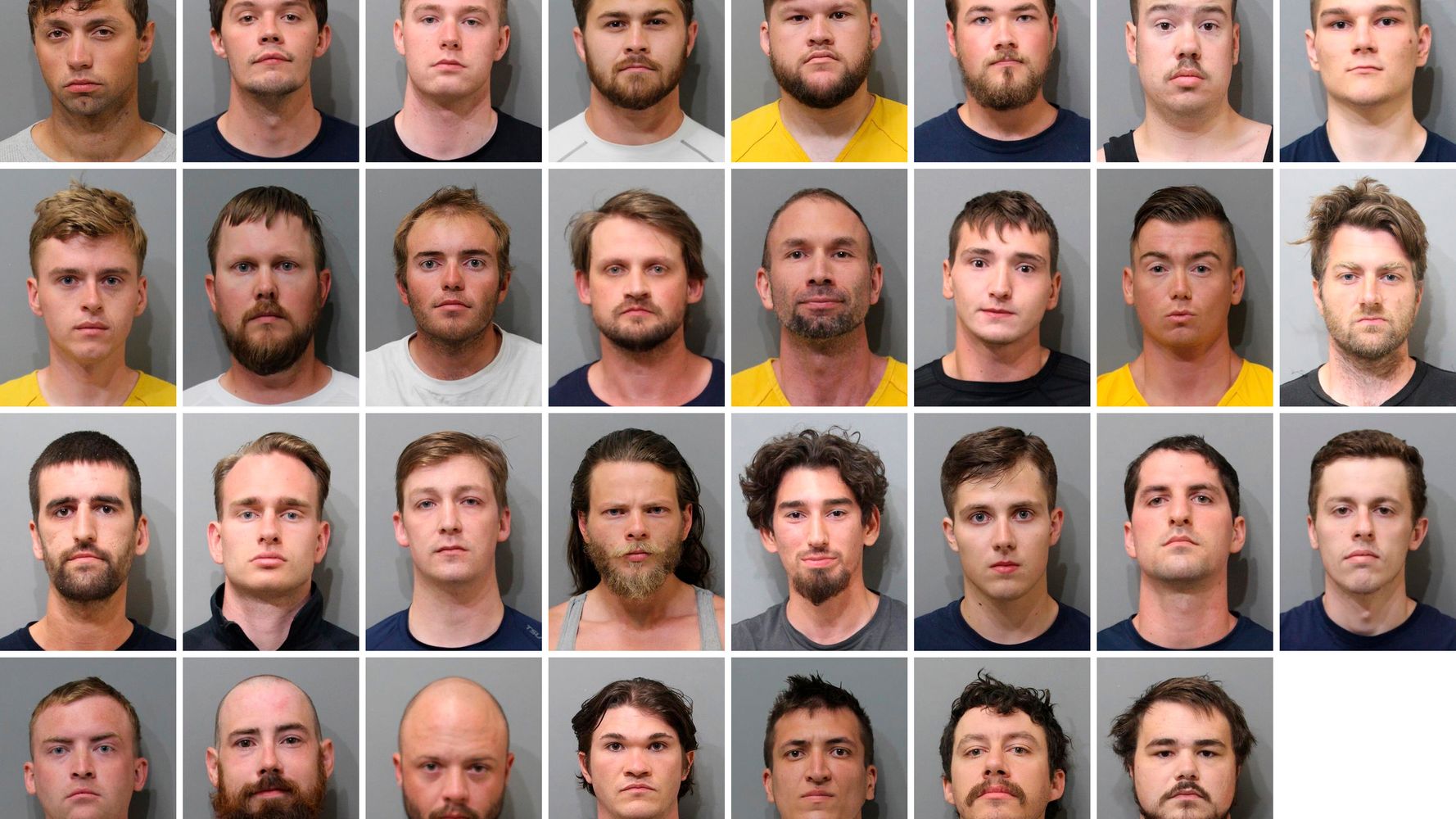 At a Republican fundraiser in Stateline, Idaho, a local GOP official named Dan Bell was excited to introduce the next speaker.

“He’s definitely not OK with trans or any of that gay shit,” Bell, youth chair of the Kootenai County Republican Central Committee, said into the microphone as the crowd laughed. “Please give it up for Dave Reilly!”

Reilly took the stage that day, April 16, to cheers. “A big round of applause for our Sheriff Norris, who keeps us safe!” Reilly said, pointing to Kootenai County Sheriff Bob Norris in the crowd, according to video footage obtained by HuffPost. Reilly is a white nationalist who recently moved to Idaho and aims to take over the state political system from the ground up.

In the crowd with the sheriff was a mix of fellow white nationalists, along with Proud Boys, militiamen and a far-right bike gang. Over the ensuing two months, what bound this group together was a deep ire toward LGBTQ people and a desire to stop a Pride event in nearby Coeur D’Alene on June 11.

With the blessing of local Republican officials and using the same rhetoric as many GOP politicians nationwide, this far-right coalition churned out propaganda falsely labeling Pride as a haven for “groomers” and “pedophiles.” Participants also issued warnings to would-be Pride attendees: We’ll be there to confront you, and we’ll be armed.

And they were. Bigots turned out in big numbers to harass and intimidate their queer neighbors. A U-Haul truck full of masked men from the white supremacist group Patriot Front turned up ready to storm the Pride event, but they were stopped by police and arrested on charges of conspiring to riot, sparking a wave of national headlines.

All 31 men have now been identified and charged with conspiracy to riot. Democratic state Rep. Chris Mathias has suggested prosecutors pursue harsher felony charges under a state terror statute. On Thursday, U.S. Rep. Bobby Rush sent a letter to the U.S. Attorney General Merrick Garland urging him to consider federal charges under the Anti-Riot Act.

“It appears these people did not come here to engage in peaceful events,” Norris told a local reporter. The sheriff protected the Pride event from far-right antagonists and got to take some credit for the shocking bust that unmasked 31 white supremacists (a local hotel worker had tipped off his office after seeing them pile into the truck).

But there’s also little accounting for Norris’ connections to the very far-right coalition that made Coeur D’Alene Pride a target.

Patriot Front needs to be understood as a part of the militant wing of the Republican Party’s revanchist campaign to erase trans people from public life and push queer people back into the closet. When the right uses eliminationist rhetoric about LBGTQ people, it can’t then feign shock when straight-up fascists show up to support its cause.

This last year has seen Republican politicians and right-wing media influencers across the country stir up a moral panic about the LGBTQ community being “groomers” — a term for manipulating children to make them vulnerable to sexual abuse. A wave of anti-LGBTQ laws, like Florida’s “Don’t say gay” bill, has swept the nation. This type of rhetoric and legislation has inspired far-right groups to confront and harass queer people in America at an accelerating rate that experts fear could soon mean more violence.

And it’s no coincidence this particular group chose Idaho. It was one of the first states to pass anti-trans laws related to state documents and youth sports, and moreover, it has been ground zero for a far-right effort to take power by the ballot box.

Eric Ward, director of the Western States Center, a Portland, Oregon-based civil rights organization that monitors right-wing extremists, said in a statement this week that “Idaho is a bellwether state for where the rest of the country may be headed in terms of how anti-democracy groups try to build power.”

Anatomy Of A Moral Panic

Norris, the Kootenai County Sheriff, did not respond to a request for comment on why he lent the imprimatur of his office to the gathering of bigots and extremists at Cruisers Bar & Grill back in April.

Carl Bjerke, a retired firefighter from California who recently won the local GOP primary for Idaho state Senate — which, in a conservative place like North Idaho, means he’s all but guaranteed to win the general election — was photographed at the event. He also didn’t respond to a request for comment about his attendance.

Neither did Bell, the event’s organizer and youth chair of the Kootenai County Republican Central Committee — an organization that’s part of the Christian nationalist insurgency across Idaho.

The headliner for the occasion was Bryson Gray, a MAGA rapper who recently released a homophobic song called “Pride Month” that includes the lyrics: “If a man would kiss another man, he’ll prolly kiss a child / Saying this was normal ten years ago, now it’s not allowed / I’m saying what other people think but I say it loud / How you a happy degenerate? Reprobate and proud.” In a music video for the song, Gray can be seen lighting a rainbow Pride flag on fire.

After performing onstage, Gray took photos with a pair of white nationalist figures in the crowd who have been welcomed with open arms into North Idaho Republican circles over the past year: Reilly, who moved to Idaho recently from Pennsylvania, and Vincent James Foxx, who moved from California.

Reilly and Foxx, both of whom have extensive histories of extremism, have been at the center of the anti-LGBTQ push in North Idaho, and their propaganda has often received a boost from national right-wing media influencers.

Back in December, according to a video obtained by HuffPost, Reilly spoke at a library board hearing in Post Falls, Idaho, where he lives. Holding his baby in his arms, Reilly — who has said “every Jew is dangerous” and who marched at the deadly 2017 neo-Nazi rally in Charlottesville, Virginia — took to the podium to speak in favor of removing LGBTQ-related content from the library.

“It’s not about censorship, it’s about them promoting a gay agenda and corrupting our children,” Reilly said. “These people are perverts and they are trying to pervert our children. Either we say no and tell them to go somewhere where they are welcome — like Portland or Seattle or LA or San Francisco. Get out of our community!”

Some in the crowd jeered, but more cheered for Reilly — who was endorsed by the local Republican committee in an unsuccessful bid for a school board seat last year.

“Idaho is a bellwether state for where the rest of the country may be headed in terms of how anti-democracy groups try to build power.”

A few months later, in mid-April, Reilly and Foxx turned their attention to the upcoming Pride event in Coeur D’Alene. “Groomers are going to try and gather in the park in June,” Foxx alerted his 95,000 followers on Gab, the fascist-friendly social media platform.

By mid-May, Foxx was delighted to see that other far-right groups in the area were now aware of Pride. “The Panhandle Patriots and several other groups plan to protest the ‘Pride in the Park’ event in Coeur d’Alene on June 11th,” Foxx wrote on Telegram for his 40,000 followers on that platform. “God bless Idaho!”

“We are having an event the very same day,” White said of Pride. “That very same day we actually intend to go head to head with these people. A line has to be drawn in the sand. Good people need to stand up. And she [Scott] was talking about the repercussions. We say, damn the repercussions. Stand up, take it to the head. Go to the fight.”

After facing some negative media backlash over the remarks, Panhandle Patriots — which is known to turn up to political events with guns — issued a statement claiming their counter-demonstration at Pride would be “peaceful” but added: “We implore the Christian community to come together and show these LGBT groomers that North Idaho stands firmly against their sick agenda and that God still rules in the Panhandle.”

In late May, Reilly seized on the fact that one of the Coeur D’Alene “Pride in the Park” sponsors was The Satanic Temple. A little online research shows the Satanic Temple is a secular organization that does not actually believe in the deity of Satan, but uses him as a mascot to critique religious fundamentalism.

But in Reilly’s hysterical rendering, the group was a cabal of evil “satanists” conspiring with degenerate queers to groom kids.

“The Satanic Temple Announcing Attendance at Coeur d’Alene’s “Pride in the Park” — All Ages Event to Host Drag Queen Show for Idaho Children,” read a headline on the Idaho Tribune, a junk news website masquerading as a legitimate news source that, according to the Southern Poverty Law Center, is published by Reilly.

In the weeks leading up to Pride, Raichik used LibsOfTikTok — which is now funded by conservative activist and entrepreneur Seth Dillon — to spread fear over drag queen performances and other LGBT+ events.

Extremism reporter David Neiwert notes that Raichik was “apparently in such close contact with Reilly that one of LibOfTikTok’s tweets promoted a Tribune story about 20 minutes after it was published.” The Satanic Temple eventually pulled out of the event.

By June 11, extremists across America knew about “Pride in the Park” in Coeur D’Alene.

Some men carried AR-15s. Others wore neo-Nazi skull masks while holding a “Groomers Are Not Welcome in Idaho” banner. And other men, according to a dispatch from Neiwert, held signs “citing the Leviticus verse that recommends homosexuals be put to death.”

And then there were Reilly and Foxx, who led a couple dozen Christian nationalists in prayer near “Pride in the Park.”

The far right already had a menacing presence at the Pride event when, at around 2 p.m., the U-Haul truck arrived. Police threw open the back door, revealing masked white men packed in like sardines, their hands up.

Of the 31 Patriot Front members arrested, only two were from Idaho. A handful of them were from just across the state border in Spokane, Washington. The rest hailed from a dozen states, including Texas, home of the group’s 23-year-old, cowboy-hat-wearing leader, Thomas Rousseau.

Rousseau and Reilly both marched at the 2017 white supremacist rally in Charlottesville, where a neo-Nazi associated with a group called Vanguard America drove his car through a crowd of anti-racist protesters, killing one woman and injuring 19 others.

Rousseau was a member of Vanguard America, which dissolved after the attack. He formed the Patriot Front in its ashes, organizing chapters across the country. Over the last couple of years, he’s led the group in a nationwide hate crime spree, destroying dozens of Black Lives Matter murals and symbols across the country, according to a HuffPost investigation earlier this year.

A video obtained by the independent media collective Unicorn Riot also showed Patriot Front members burning a rainbow Pride flag during a ceremony in the woods. “To those who destroy our nation, we will destroy your symbols and all that you worship,” one of the members says in the video. “If you think we will lay down and perish, you are gravely mistaken.”

Patriot Front members, like hooded Ku Klux Klan members in the 1920s, often keep their membership in the group a secret, so the 31 arrests on June 11 in Coeur D’Alene amounted to a mass-doxxing event.

As the Patriot Front members sat in the grass, hands zip-tied behind their backs, most wouldn’t talk to police, according to a report from the Coeur D’Alene Press. But Wesley Van Horn of Lexington, Alabama, allegedly did.

When a police officer remarked that Van Horn had “traveled a long way for his cause,” Van Horn replied, “We go where we’re needed.”