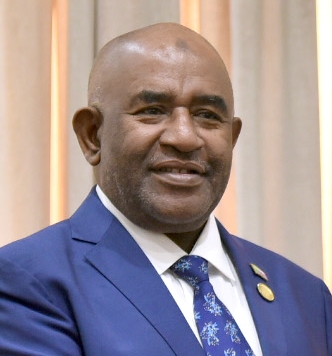 Between the years 1977 and 1980, Assoumani trained at the Royal Military Academy in Morocco and became a parachutist. He pursued a military career for two decades, completing further training at a French military academy in 1996, where he was promoted to colonel and chief of staff of the new National Development Army (NAD of the Comoros). He retained this position until the fall of the civilian government in 1999.

Assoumani became president of the Comoros Council of State in 1999 after overthrowing interim president Tadjidine Ben Said Massounde in a coup d’état. His troops justified the coup on the grounds of protecting territorial integrity after Massounde had started negotiations with representatives of the island of Anjouan on greater autonomy or independence. This was despite the fact that an international conference in Antananarivo had led to an agreement between the three islands of the Comoros, although the Anjouan government had delayed the signing of the agreement.

On December 23, 2001 the new constitution proposed by Assoumani was adopted by referendum. The constitution introduced a rotating presidency and granted considerable autonomy to the Comorian islands, each with its own basic law, flag and executive. It also renamed the country from the Federal Islamic Republic of the Comoros to the Union of the Comoros and redesigned the national flag to remove the religious inscriptions. It became multi-colored, as seen today.

Assoumani announced elections for 2002 and he resigned as President of the Council of State on January 21, 2002 to run for President of the Union of the Comoros. He won the contest. He ran in the 2016 presidential elections for a second time. He came third in the first round on February 21st with 14.96% of the vote, before winning the second round on April 10, with 40.98% of the vote. However, both Assoumani and his opponent, Mohamed Ali Solihi, contested the election results, alleging irregularities and fraud in the second round. Assoumani demanded the invalidation of ballots from most polling stations, especially in Anjouan. As a result, a third round of voting took place on May 11. The Constitutional Court declared Assoumani the winner on May 15, with 41.43% of the vote and he took office on May 26 for a five-year term.

During his tenure, the opposition accused Assoumani of amending the constitution to remain in power until 2029. In addition, the closure of the Constitutional Court and the Anti-Corruption Court led the European Union to suspend all cooperation with Comoros in protest.

On February 13, 2019, Assoumani stepped down from the presidency to stand for re-election in the 2019 Comorian presidential election on 24 March. He was elected in the first round and took office again on April 3, 2019.