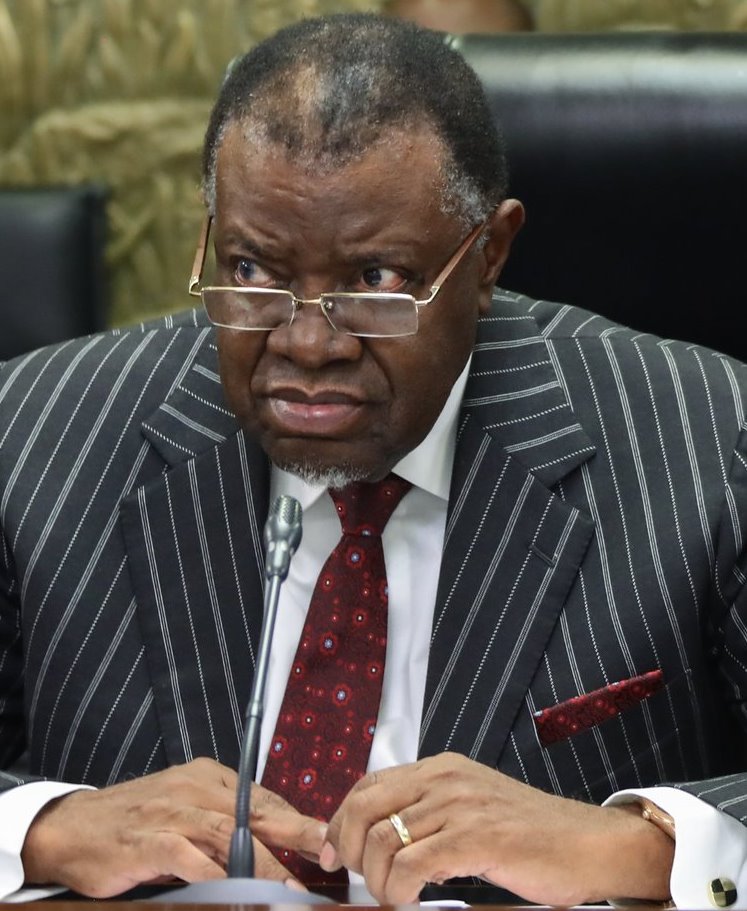 Hage Gottfried Geingob, the third democratically elected president and the first prime minister of Namibia, was born on August 3, 1941, in Otjiwarongo, Otjozondjupa Region, Republic of Namibia. He was reared by his mother-figure Ouma Hendrina Thomas Geingob.   He began his primary education in the region under the Bantu Education Act 1953, legislating the apartheid system. However, he completed his education through the Trans-Africa Correspondence College of South Africa. In 1958, Geingob attended Augustineum Training College in the district capital of the Okahandja, graduating in 1962.  Afterward, he moved to Botswana and served as Assistant Representative of the Southwest Africa People Organization (SWAPO Party). He remained there in a refugee camp until 1964 and later that year, he left the continent for the United States to study.

In 1964, Geingob was appointed SWAPO Representative at the United Nations and to the Americas. He remained at the UN until he became the founding director of the UN Institute for Namibia in Lusaka, Zambia. In 1967, Geingob opened the first South West Africa People’s Organization (SWAPO) office in New York City.

Geingob studied at Temple University in Philadelphia, Pennsylvania, on a full scholarship but he received a Bachelor of arts degree from Fordham University in Bronx, New York, in 1970. In addition, he earned a Master of Arts degree in International Relations from the Graduate Faculty of the New School in New York City in 1974. He completed his formal education at the University of Leeds in Leeds, United Kingdom where he earned a Doctor of Philosophy (Ph.D.) degree. His dissertation was State Formation in Namibia: Promoting Democracy and Good Governance.

From 1990 to 2002, Geingob was the first Prime Minister of Namibia. He married Loini K. Kandume, a businesswoman, on September 11, 1993, in Windhoek, Namibia. Since 2007, he has been Vice-President of Namibia’s ruling party, the Southwest Africa People’s Organization (SWAPO).

In 2012, Geingob was re-elected as Prime Minister then three years later in 2015, he was elected president of Namibia by an overwhelming margin while still serving as prime minister. During that year he married a fourth time, to Monica Geingos, an attorney. They have two children, a son, Hage Geingob Jr, and a daughter, Dângos Geingos.

In 2022, His Excellency Hage Gottfried continued focusing on the advancement of the economy, improving the quality of his governance, and adding to his Harambee Prosperity Plans (Pull together in the same direction).  The prospects for prosperity have brightened for his nation with the recent discovery of an estimated one billion barrels of oil off the coast of Namibia.