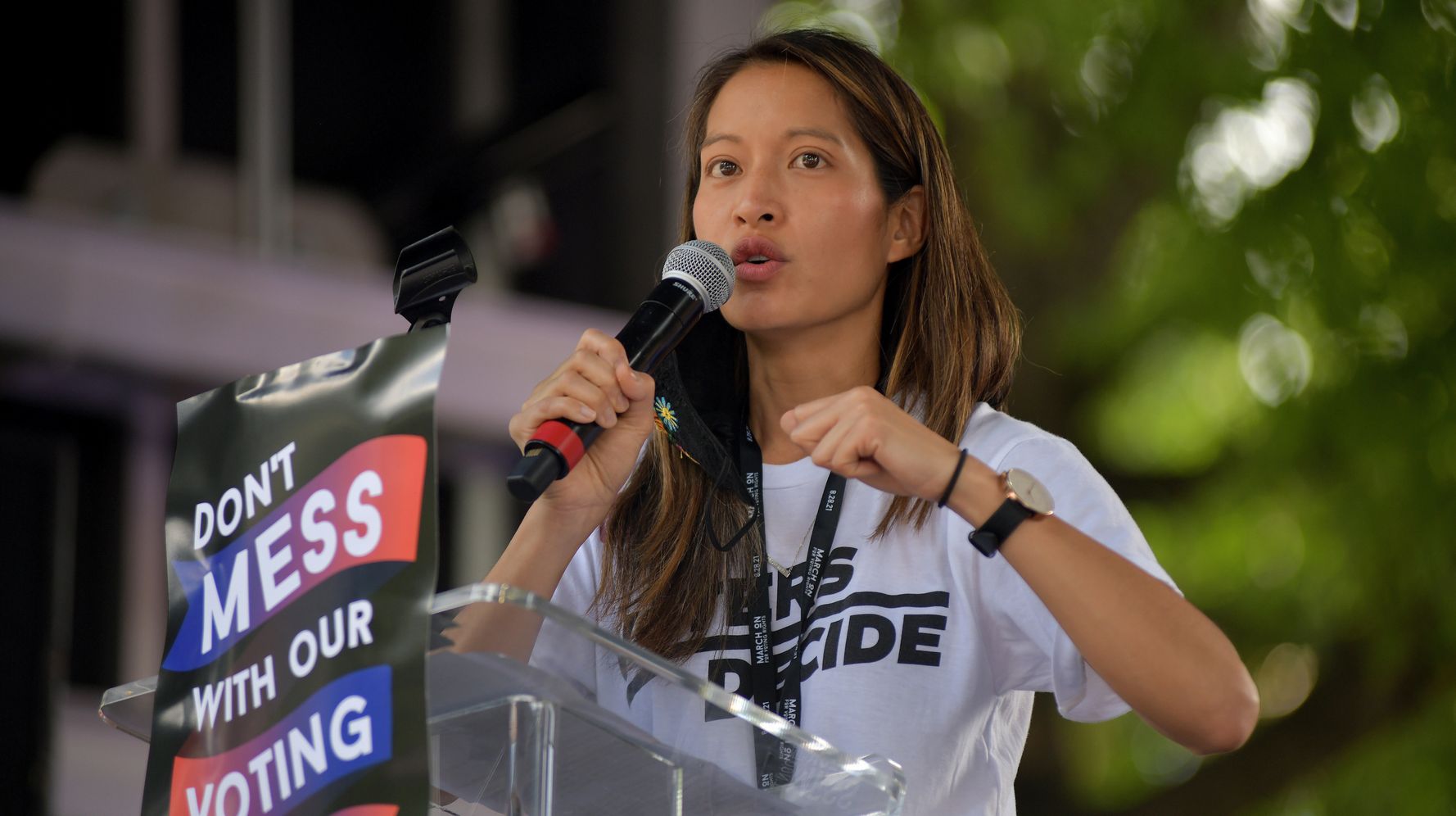 The Democratic primary in Georgia’s secretary of state race is heading to a runoff that will set up one candidate to potentially make history in November’s general election, no matter who ultimately wins the nomination on June 21.

State Rep. Bee Nguyen finished as the top vote-getter in Tuesday’s primary, winning roughly 44% of ballots cast in the contest. But that left Nguyen, who led the field in fundraising and endorsements, short of the majority threshold needed to avoid a runoff.

Nguyen’s opponent in the head-to-head matchup that will determine the Democratic nominee has not yet been decided: As of Wednesday morning, former state Rep. Dee Dawkins-Haigler was in second place with 18.7% of the vote, while Michael Owens, a former Cobb County Democratic Party chairman, was in third, with 16.5%. Former Milledgeville, Georgia, Mayor Floyd Griffin is in fourth with 11%.

Nguyen, who rose to national prominence after challenging Republican voter fraud conspiracy theories and efforts to undermine Democratic victories in the 2020 elections, would become the first Asian American candidate elected to statewide office in Georgia history if she wins the runoff and the general election in November.

Dawkins-Haigler, Owens or Griffin would become the first Black secretary of state in Georgia history if any of them prevail in the runoff and again in November.

The Democratic contest occurred opposite a heated Republican primary that pitted incumbent Brad Raffensperger, who thwarted former President Donald Trump’s efforts to steal the 2020 election, against Rep. Jody Hice (R-Ga.), who twice voted to contest the 2020 election results in Congress.

The GOP primary even attracted votes from thousands of Georgians who had cast ballots in Democratic primaries in previous years, according to The Atlanta Journal-Constitution, as some Democratic voters sought to help derail Hice and other candidates who received Trump’s endorsement.

But Democrats in Georgia and elsewhere say that result does not lessen the importance of November’s election. Although Raffensperger resisted Trump, they argue, he also backed the GOP-controlled legislature’s passage of Senate Bill 202, an “election integrity” law that placed a litany of new restrictions on voting rights.

“Secretary of State Raffensperger may have done his job in 2020, but the very least a secretary of state can do is not steal an election from the American people,” Colorado Secretary of State Jena Griswold, the chair of the Democratic Association of Secretaries of State, told HuffPost in a Tuesday evening interview.

Raffensperger, she added, “has done tremendous damage to voting rights while in office.”

The association, a party campaign arm, endorsed Nguyen in the Democratic race.

Georgia’s secretary of state contest is unlikely to draw as much attention as higher-profile battles for governor and U.S. Senate, but Democrats hope a strong top of the ticket ― led by gubernatorial candidate Stacey Abrams and Sen. Raphael Warnock ― can help them prevail in a contest they see as crucial to the fight to protect voting rights, elections and democracy itself in Georgia.

The secretary of state race, which determines Georgia’s top elections official, took on heightened importance after Trump sought to overturn the 2020 presidential election results in that state, and spread conspiracy theories and lies about widespread voter fraud and other irregularities that he claimed tainted the result. Raffensperger refused Trump’s attempts to claim an illegitimate victory in Georgia, drawing the ire of Trump and many Republicans.

Last year, Georgia’s Republican-controlled legislature also used the supposed issue of fraud to pass SB 202, one of the country’s most sweeping and aggressive packages of voting restrictions and election reforms. The bill stripped some powers from the secretary of state, implemented new restrictions on absentee voting, and gave the legislature more partisan power over elections.

Republican state legislatures passed another 30 bills limiting voting rights across the country in the wake of SB 202, which Democrats have cast as a model for GOP attempts to suppress the votes of Black people, people with disabilities, other minority communities and young voters.

This has made Georgia one of the main battlegrounds for secretary of state races, which have become a focus for both parties as Republican election deniers seek to win contests in key swing states and Democrats attempt to stop them.

All five Democratic candidates in the Georgia secretary of state primary ran on platforms that emphasized protecting voting rights and democracy. The Democratic debates were a sharp contrast from the GOP’s, which focused on disputes over whether the 2020 election was stolen.

The Democratic candidates all opposed SB 202, and all said they would seek to implement policies that expand voting rights.

Nguyen, who in 2017 won the seat formerly held by Abrams, racked up the most endorsements in the race, and led Democratic candidates in fundraising. She had the backing of Rep. Hank Johnson (D-Ga.) and more than 100 state lawmakers. She also won endorsements from numerous national progressive groups, including Fair Fight, the voting rights organization Abrams launched; the pro-choice group NARAL; EMILY’s List; and the Service Employees International Union.

Nguyen decided to run for secretary of state after the January 2021 insurrection at the U.S. Capitol, she told HuffPost last year. Nguyen, a daughter of Vietnamese immigrants who fled their country after an authoritarian Communist government took power, said she feared that the GOP’s attempts to overturn the 2020 election, and the party’s increasingly authoritarian turn, could lead to the destruction of American democracy ― especially with Republican election deniers lining up to run for secretary of state positions in Georgia and other swing states.

“We are one or two election cycles away from a constitutional crisis,” Nguyen said at the time. “We only have a handful of opportunities to get this right. If we do not elect secretaries of state in our swing states who will uphold the law and protect our democracy, we’re going to be in trouble for a very long time.”

Dawkins-Haigler, meanwhile, served as a Georgia state representative from 2009 to 2017. She ran for secretary of state in 2016, but lost to former Rep. John Barrow (D-Ga.) in a primary. During a primary debate in early May, Dawkins-Haigler called the GOP election law “unconscionable,” and said she would increase funds to protect voting rights and bolster voter education.

“I want to make sure that the people of Georgia, Black people in particular, will have free and fair elections and access to the ballot box at any time,” Dawkins-Haigler said at a recent campaign stop, according to the Valdosta Daily Times. “Given the craziness of the last two years, I worry that their vote will not count or be suppressed.”

Owens is a cybersecurity expert and former Marine who led the Cobb County Democratic Party in suburban Atlanta as that region became increasingly blue. He lost two primary challenges to Rep. David Scott (D) in 2014 and 2020.

Owens, like other Democratic candidates, has said he opposes SB 202 and would seek to make it easier for Georgians to vote. He also focused his campaign on Georgia businesses, saying that the next secretary of state should prioritize minority-owned companies.

Georgia Democrats have not won a secretary of state race since 2002. But with voting rights issues animating many of the party’s voters, Democrats are hopeful they can follow their success there in 2020 ― when Warnock, Sen. Jon Ossoff (D) and President Joe Biden won a trio of statewide races ― with another round of victories in November’s midterm elections.

The Races That Could Prevent The Hijacking Of The 2024 Election

Trump’s Is Making Georgia All About Himself, And It Could Cost The GOP