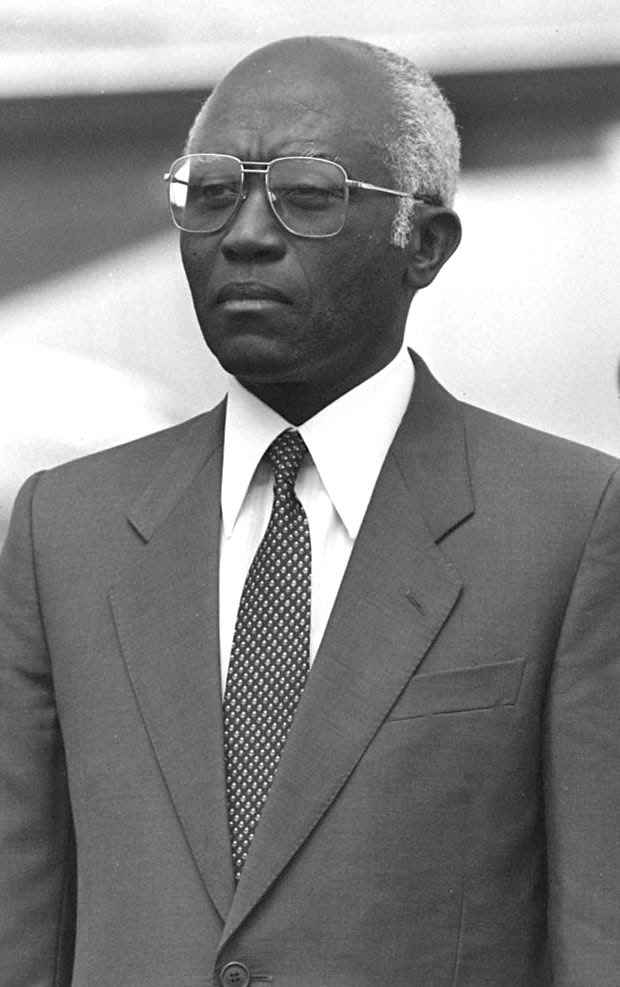 Aristides Maria Pereira, the son of Porfirio Pereira Tavares and Maria das Neves Crus Silva, was the first President of Cape Verde. He was born on November 17, 1923 in Boa Vista, Cape Verde. At the time of his birth, Cape Verde, ten islands off the West African coast, was a Portuguese colony situated west of the mainland territory of Portuguese Guinea (today’s Guinea Bissau).

Pereira attended elementary and middle school in Cape Verde. After secondary school he trained as a radio and telegraph technician. He secured employment with the Portuguese colonial administration and eventually became Chief of Telecommunications in Guinea Bissau. While in Guinea Bissau Pereira became acquainted with Amilcar Cabral an advocate of independence for both Cape Verde and Guinea Bissau. By 1952 Pereira and Cabral were working together to resist Portuguese rule in the colonies by non-violent means.

In 1956 Pereira, Cabral and other nationalists founded the African Party for the Independence of Guinea and Cape Verde (PAIGC). The party supported laborers and agricultural workers in their efforts to organize. In 1959 a dock worker’s strike, supported by PAIGC, was violently suppressed by the Portuguese colonial administration. Over 50 striking workers were killed by the Portuguese military and police. After this incident PAIGC endorsed violent tactics to gain independence. Pereira became the leader of PAIGC in the Cape Verde Islands. Amilcar Cabral became the leader of the party in Guinea Bissau.

On January 23, 1963, PAIGC leaders announced the start of an armed rebellion against Portuguese rule. Guerrilla warfare followed centered mainly in Portuguese Guinea. The freedom fighters were given sanctuary and support by the neighboring countries of Guinea and Senegal. PAIGC’s guerrilla war was one of the most successful wars of independence in modern African history.

Pereira was appointed Head of International Affairs for the PAIGC. In that position he was able to secure aid from the Soviet Union for the fighters. He was also appointed Deputy Secretary of the PAIGC.

On January 20, 1973, Amilcar Cabral was assassinated in Conakry, Guinea. He was killed by a disaffected member of PAIGC, but some historians suspect the killer may have been working in concert with Portuguese agents. Cabal’s brother, Luis, became the leader of PAIGC.

On September 24, 1973, the leaders of the PAIGC unilaterally proclaimed independence. Portugal initially did not acknowledge their declaration but after another year of fighting, the Portuguese recognized the independence of Portuguese Guinea on September 10, 1974. Luis Cabral became president of independent Guinea Bissau. On July 5, 1975, Cape Verde became independent with Aristides Pereira inaugurated as head of state three days later on July 8.

Efforts to establish a united state between the two former colonies were not fruitful and in 1981 Cape Verde officially separated from Guinea when a formal constitution was adopted (previously the states had temporary constitutions).

In 1981 and 1986 Pereira was elected President of Cape Verde. He created a one-party state with strong connections to the Soviet Union. In September 1990 the government yielded to demands and allowed a multiparty political system. In the 1991 multiparty elections Pereira was defeated by Antonio Montero and retired from politics.

Aristides Pereira married Carlina Fortes in 1959. They were the parents of one son and two daughters. Pereira died on March 22, 1991, in Coimbra, Portugal where he was undergoing medical treatment. Cape Verde’s international airport was renamed as Aristides Pereira International Airport in tribute to him on November 19, 2011.