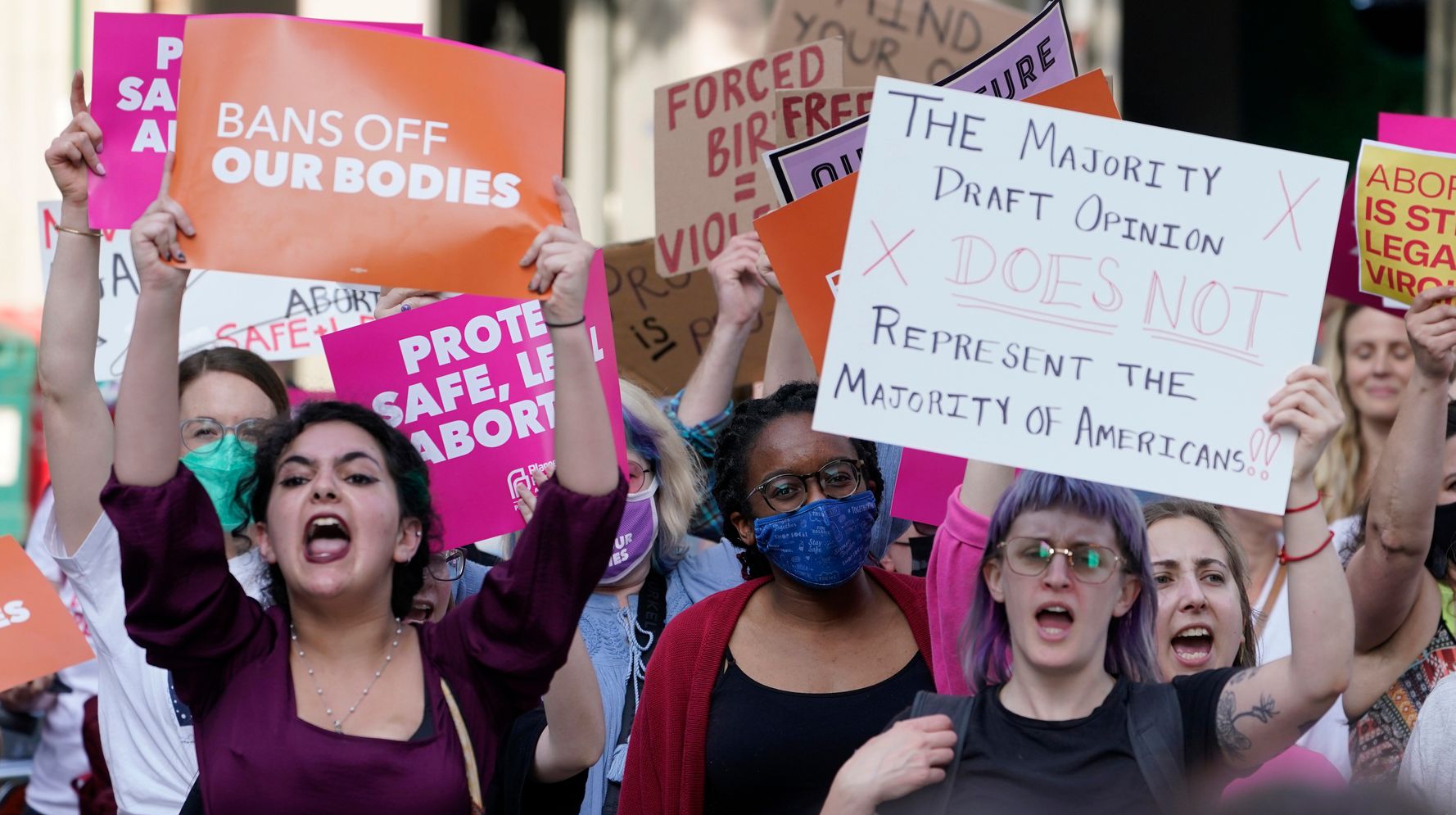 With the Supreme Court poised to overturn abortion protections, people took to the streets in cities across the country to protest for the right to safe, accessible abortion care for all.

Within hours of Politico’s reporting on a leaked draft Supreme Court opinion on Monday, people flooded the steps of the Supreme Court in Washington, D.C., protesting against the court’s apparent plan to overturn the landmark abortion protections of Roe v. Wade.

By late Tuesday, hundreds more had gathered outside the nation’s highest court.

Queer activists — whose rights to same-sex marriage and consensual sex are also threatened by the draft opinion — led chants of: “Abortion rights are under attack — what do we do? Stand up, fight back!”

Elsewhere on Tuesday, activists organized rallies outside federal courthouses across the country, from Oakland, California, to Richmond, Virginia, to Dallas, Denver and Sarasota, Florida.

In New York City, hundreds gathered at Foley Square outside the federal courthouse downtown — one protester’s sign read: “Get your fucking hands off our bodies.”

In Knoxville, Tennessee, people held hand-made signs reading “Abortion is healthcare” and “We can’t go back.”

A variety of signs from the protest. Some read “all the expletives,” “bans off or bodies,” “my body, my choice,” “uteruses are more regulated than guns,” “abortion rights are human rights,” and “this is not ovary-reacting” are just some signs here @wvlt pic.twitter.com/sHxXm4x5f5

In Austin, Texas, hundreds gathered outside the state Capitol, with at least one person carrying a sign that read: ”My body, my choice.”

Abortion rights activists are gathered outside of the Texas State Capitol building in Austin for an “emergency protest” in response to the leaked draft opinion from the Supreme Court that would overturn Roe vs Wade. #RoeVsWade #abortionrights pic.twitter.com/0R1MtDVDwn

A mixture of DePaul and Columbia students continue to rally at Jackson and State in Chicago. #Chicago #RoeVWade pic.twitter.com/ZXR9Ub7DgJ

If Roe is overturned, low-income, Black and Latinx people would be disproportionately impacted by a lack of access to safe abortion.

“Women will fight back like we always have,” the Women’s March said in a statement on the Tuesday rallies, which were organized by several pro-choice groups. “We’re showing up for abortion rights, saying bans off our bodies, and demanding that elected officials take action before the Court gets the chance to overturn abortion.”

Republicans have long sought to restrict abortion across the country. Currently, 26 states are likely or almost certain to ban abortion in the case of a Supreme Court decision overturning Roe, according to the pro-choice Guttmacher Institute.

It’s worth noting that the court’s draft decision is not final and that abortion remains legal in all 50 states for now.

In response to the draft leak, progressive Democratic lawmakers have been calling for the Senate to abolish the filibuster to pass the Women’s Health Protection Act, which would guarantee access to abortion care nationwide.

Sunrise Movement told HuffPost that they were planning another protest with March for Our Lives and other youth-led groups on Thursday outside the Supreme Court to call for the Senate to codify Roe v. Wade into federal law.

“We are entering an era where our parents had more reproductive rights than us,” the youth-led groups said. “Decades of progress are being erased by a conservative majority on the Supreme Court. … Our generation will not stop fighting for reproductive rights.”

What It Would Take For Abortion Rights To Be Codified Into U.S. Law