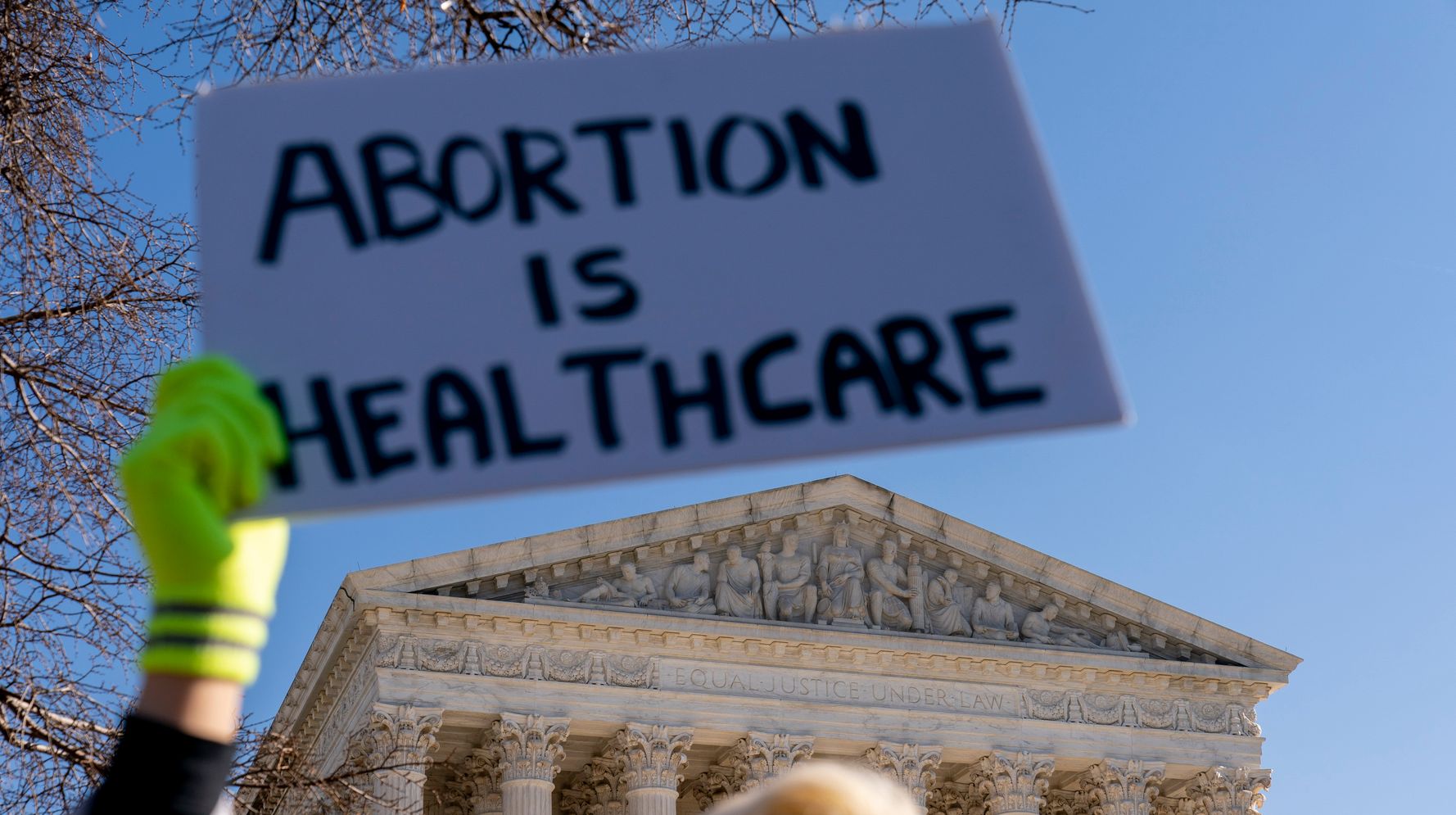 A Supreme Court draft opinion on the upcoming case pertaining to Roe v. Wade, the landmark decision that expanded access to abortion nationwide, leaked on Monday night ― and sent shockwaves through the internet.

“Roe was egregiously wrong from the start,” Alito wrote in the draft, according to Politico. “We hold that Roe and Casey must be overruled. … It is time to heed the Constitution and return the issue of abortion to the people’s elected representatives.”

Democrats and Republicans reacted to the news on Twitter, mostly falling along party lines on their views to protect or ban abortion access.

“Congress must pass legislation that codifies Roe v. Wade as the law of the land in this country NOW. And if there aren’t 60 votes in the Senate to do it, and there are not, we must end the filibuster to pass it with 50 votes,” tweeted Sen. Bernie Sanders (I-Vt.).

In a tearful video posted to Twitter, Rep. Marjorie Taylor Greene (R-Ga.) told her followers: “This is a great victory for God and the unborn who have been innocently slain for years.”

The Supreme Court is preparing to overturn Roe—the most significant and glorious news of our lifetime. Join me in praying to God for the right outcome.

The court’s official ruling is not expected until June. The current opinion is just a draft, and justices can change their votes any point. But a leaked opinion before publicly announcing a decision is unprecedented, and will likely have a ripple effect on the next steps for both abortion opponents and pro-choice groups.

The Supreme Court’s public information officer said the court had “no comment” on the leaked draft opinion.

Jodi Hicks, president and CEO of Planned Parenthood Affiliates of California, had some strong words in response to the leaked draft.

“This is the nightmare scenario we in the reproductive health, rights, and justice space have been sounding the alarm about and especially once the U.S. Supreme Court had a conservative majority,” Hicks said in a statement Monday night.

“And now, if this opinion truly is reflective of the final decision of the majority of the U.S. Supreme Court Justices, then even if abortion remains legal today, we are just days away from more than 26 states banning access to abortion services, essential and safe health care that has been a constitutional right for nearly 50 years,” she said. “Make no mistake about it, the plan has always been to ban and criminalize abortion ever since 1973 when Roe v. Wade was decided.”

“This is the nightmare scenario we in the reproductive health, rights, and justice space have been sounding the alarm about.”

Kimberlyn Schwartz, the director of media and communications at Texas Right to Life, celebrated the draft opinion in a statement to HuffPost.

“We are encouraged by the categorical boldness of the draft that corrects the erroneous precedent of Roe,” she said. “We prayerfully anticipate the complete reversal of Roe, giving authority to protect preborn children back to the states. However, the outcome is not final. … Pro-Life advocates must continue to pray, especially for the justices’ fortitude, until the court officially issues a decision.”

The case threatening to overturn Roe is Dobbs v. Jackson Women’s Health Organization, which centers on a 2018 Mississippi law that bans abortion at 15 weeks. The law, which was debated in front of the Supreme Court in December, directly contradicts Roe. The 1973 Supreme Court decision established a constitutional right to access abortion until a fetus becomes viable at around 24 weeks.

Prior to the leak, experts saw a few potential outcomes in the Dobbs case. The Supreme Court could strike down the law, which would mean Roe would remain intact. However, most agreed after oral arguments in December that the court’s conservative majority signaled it would likely uphold the law by either banning abortion outright or tinkering with the viability line. Either of those options would effectively overturn Roe — setting off a nationwide battle in which some states outlaw abortion and others would go to great lengths to protect it.

The court’s decision will not be final until June, so these outcomes are still possible. However, the 98-page draft authored by Alito is a strong sign of which way the court is leaning.

Scroll below to see more reactions from lawmakers.

Abortion care is a fundamental human right and we must legislate like it.

Because of Donald J. Trump, Roe v. Wade will be overturned.

An extremist Supreme Court is poised to overturn #RoeVWade and impose its far-right, unpopular views on the entire country. It’s time for the millions who support the Constitution and abortion rights to stand up and make their voices heard. We’re not going back—not ever.

The Supreme Court’s confidential deliberation process is sacred & protects it from political interference. This breach shows that radical Democrats are working even harder to intimidate & undermine the Court. It was always their plan. The justices cannot be swayed by this attack. https://t.co/S5eMGO0dxd

This is an absolutely disgraceful attack on our fundamental right to choose, and we will fight it with everything we’ve got.

Let me be loud and clear: New York will always guarantee your right to abortion. You have our word. https://t.co/k0M2Su8mZ3

Our daughters, sisters, mothers, and grandmothers will not be silenced.

The world is about to hear their fury.

California will not sit back. We are going to fight like hell. https://t.co/EhwSWXiZhx

The next time you hear the far left preaching about how they are fighting to preserve our Republic’s institutions & norms remember how they leaked a Supreme Court opinion in an attempt to intimidate the justices on abortion https://t.co/9W6jKCZQQt

The radical right stole two seats on the Supreme Court.

And now the so-called majority apparently plans to rob women of their long-held reproductive freedom.

We will NOT go backward.

50 years of precedent—struck down by a radicalized right-wing Supreme Court packed by an authoritarian president.

This should be a wake up call to every American voter. Our democracy and the fundamental rights that come with it are on the ballot in 2022. Vote!

The Supreme Court is poised to overturn Roe v. Wade. To the nearly 2.2 million women in Michigan whose access to abortion hangs in the balance, I promise you this: I will fight like hell to make sure abortion remains safe, legal, and accessible in our state. https://t.co/Xjj5OM7jK6

This draft opinion is shocking, devastating and a blatant assault on reproductive rights. Congress must act immediately to codify Roe v. Wade and stand up for gender equality.

In case there was any doubt: the clock is ticking down to the end of legal abortion if Congress does not act. It’s time to #abolishthefilibuster and make the Women’s Health Protection Act law. #passWHPA

In the meantime: Abortion is still legal, and it’s still a right. https://t.co/LciPs7Cljb

The Reason You’re Seeing More Abortion Bans Than Ever

The Bill That Could Protect Abortion Rights If Roe Is Overturned

Why Does the Media Choose to Demonize Black Men?
Insurrectionists Fought To Hold Onto ‘Last Gasp of Whiteness’
Outrage Over Kim Potter Receiving 2 Year Prison Sentence
5 Influential Blerds From The 2010s
R. Kelly’s Conviction Is The Exception, And Not The Rule