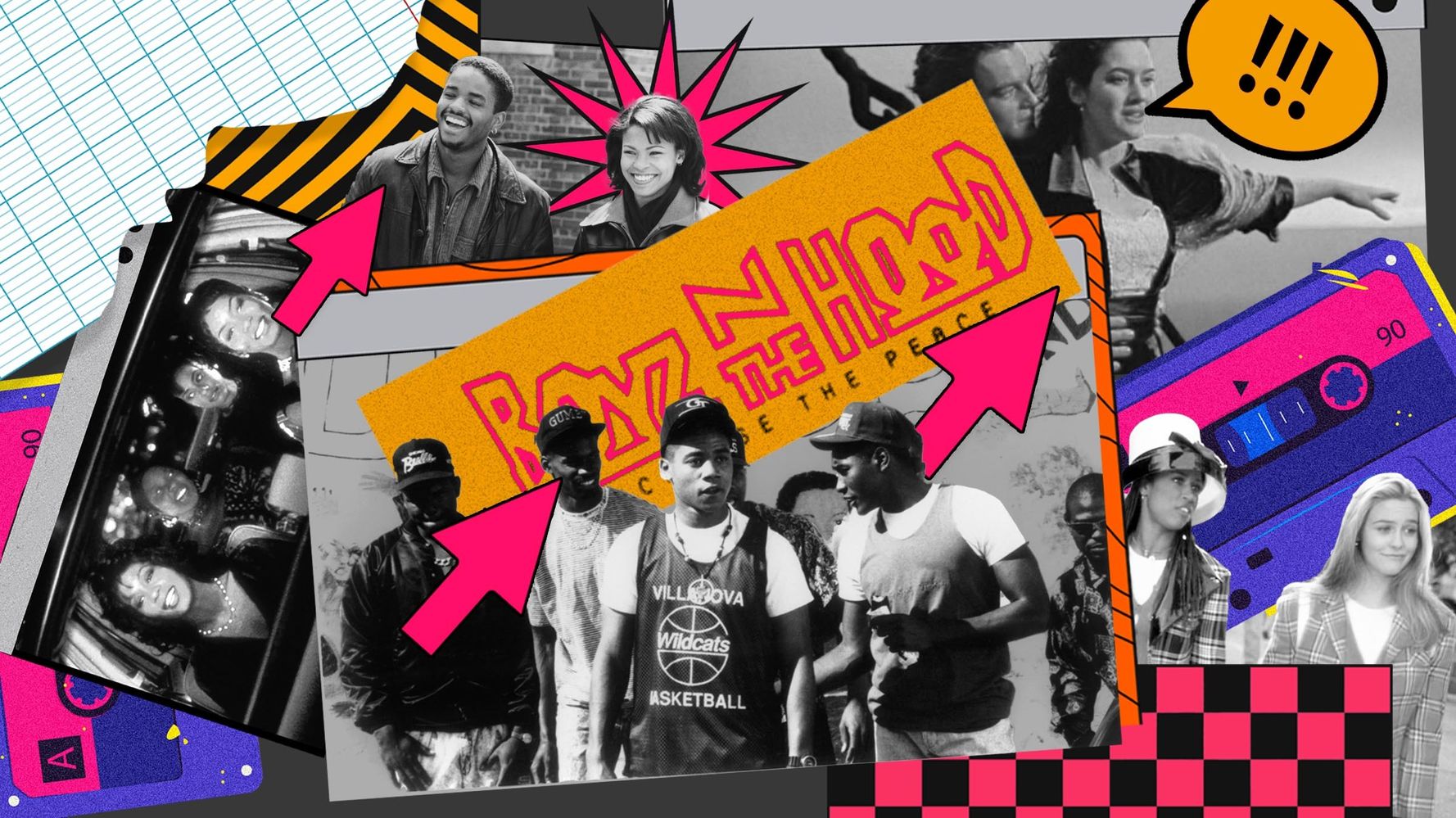 Who can forget hearing Roxette’s “It Must Have Been Love” as Julia Roberts looked wistfully out a car window after bidding her lover adieu in “Pretty Woman?” Or Toni Braxton’s “Love Shoulda Brought You Home” after Halle Berry epically breaks up with cheating-ass Eddie Murphy in “Boomerang?” Or even The Muffs’ “Kids in America” introducing the teenage spirit of “Clueless?”

They’re just a few of the songs that helped define a golden era for film soundtracks in the ’90s, back when the moviegoing experience wasn’t only about the film. Chances are that if you went to see a major movie, you’d have already worn out its soundtrack so badly that it looked like a dog had gnawed on the cassette tape. Or if you didn’t already have the album, you ran to Sam Goody shortly after watching the movie to rectify that.

Because it wasn’t enough to just see a film that we loved. Back then, we devoured every extension of it. We had to buy the poster, the T-shirt and the almighty soundtrack comprised of A-to-B-side bangers. It was the era when record labels like LaFace and Arista entered a mutually beneficial collaboration with major film studios such as Paramount and New Line Cinema to take even more of our money. So we could blast Nate Dogg and Warren G’s “Regulate” from the “Above the Rim” soundtrack while driving down the street or at home.

It was a great time for albums across all genres, especially as grunge and hip-hop catapulted to the mainstream and Hollywood was determined to be a major part of that. Studios also benefited from our love affair with nostalgia with hits like Aerosmith’s “Sweet Emotion” on “Dazed and Confused” and The Mamas & the Papas’ “California Dreamin’” on the “Forrest Gump” soundtrack. Or drafted some of the greatest pop stars ever, like Céline Dion, to launch a film like “Titanic” right into the stratosphere.

These soundtracks captured the rage, the heartbreak, the chaos and the emergence of a generation that might not have ever quite realized what it had at the time. Or how fleeting it was.

“It completely changed,” Chris Hite, a film professor at Allan Hancock College, told HuffPost. “Almost in 1999, just like a switch went on and it was over.”

It’s true. By the end of the ’90s, largely original and consistent soundtracks like those of “Love Jones” and “Cruel Intentions” deteriorated as we went into the aughts. In order to discuss why that happened, we need to talk about how ’90s soundtracks became what they did in the first place.

A lot of their success can be attributed to the meteoric rise of hip-hop and R&B as Black America responded to new social and political upheaval, marked by events like the Los Angeles uprising, and as that culture shifted to the mainstream.

If director Spike Lee helped bring hip-hop to white Hollywood and America when he used the Public Enemy anthem “Fight the Power” in 1989’s “Do the Right Thing,” filmmakers like Ernest R. Dickerson, John Singleton and Mario Van Peebles took that to a whole new level in the ’90s.

For instance, Singleton immersed his audience in a story that seamlessly intertwines the music genre with the lives of young Black men in the resonant drama “Boyz n the Hood.” Its soundtrack featured songs like Ice Cube’s “How to Survive in South Central.”

And with its success came a spree of Black films and hip-hop soundtracks for and by Black people that grappled with things like ambition, systemic racism, masculinity, and familial and romantic relationships more directly than ever before.

“A lot of what you saw was white studios realizing this burgeoning movement is happening,” said Todd “Stereo” Williams, a columnist for The Daily Beast and Billboard. “John Singleton does “Boyz n the Hood” and then the next four years you see ‘Juice’ and ‘Menace II Society.’ It’s like a wave.”

Like “Boyz n the Hood” and many other films of its ilk, Hollywood also capitalized off established names in hip-hop like Ice-T, Tupac Shakur, Will Smith and Ice Cube as then-nascent actors who inevitably also lent their talent to the unforgettable soundtracks.

As far as Hollywood — and to be fair, the buying public that gobbled up these albums like Tic Tacs — was concerned, it was a win-win situation.

“A large part of why you started to see so many rappers in movies [was] because a lot of studios realize that there was money in it, that you have a built-in audience,” Williams said. “So, it’s studio savvy and also just reflective of a cultural shift.”

The same could be said about singer-turned-actress Whitney Houston, who made “The Bodyguard” the best-selling soundtrack of all time to this day with indelible songs like “I Will Always Love You” and “I Have Nothing.”

“The approach to Whitney was almost like a Black Barbra Streisand kind of thing,” Williams suggested. “[It] was very much a package deal for her to become this. And it worked. ‘The Bodyguard’ era is her biggest era.”

Never mind whether fewer people actually watched the movie, or even liked it, than bought the soundtrack — or watched the movie mostly to hear the songs in it. A similar example is the “Above the Rim” soundtrack that includes SWV’s hit “Anything” in addition to “Regulate.”

That’s a far cry from the synergy of the soundtrack for “Love Jones,” with Maxwell’s “Sumthin’ Sumthin’” and Dionne Farris’ sultry single “Hopeless.” Or the “Boomerang” soundtrack, with Babyface’s “Give U My Heart” and the aforementioned Braxton jam — or Brandy’s “Sittin’ Up in My Room” and Mary J. Blige’s “Not Gon’ Cry” from the “Waiting to Exhale” soundtrack. Those are all classic albums paired with classic films.

Films and soundtracks by white artists, on the other hand, obviously didn’t have something like a long history of social and artistic oppression as a driving force of their success. Rather, they contended with the same feelings white America, especially young white America, had at the time: displacement, uncertainty and restlessness.

Early ’90s soundtracks swung from fun like Natalie Cole’s “Wild Women Do” on the “Pretty Woman” soundtrack to something more rebellious and nostalgic for when young people stood for something, like The Runaways’ “Cherry Bomb” on the “Dazed and Confused” album.

“It was about, ‘Where are young people now?’” Hite said. “Where are their heads? Where is the future? What does the future hold for them?”

When soundtracks began to truthfully tackle those questions, like The Verve’s “Bitter Sweet Symphony” off the “Cruel Intentions” soundtrack and the Muffs track in “Clueless,” they really soared.

With the help of the then-emerging grunge music, the “Singles” soundtrack reflected the mood of mainstream American youth who were navigating ideas of romance and adulthood when they were still figuring out themselves. Hits like Alice in Chains’ “Would?” and Pearl Jam’s “Breath” encapsulated that.

The same kind of existential crisis is apparent on the “Clerks” soundtrack, which also includes an Alice in Chains track, “Got Me Wrong,” and Soul Asylum’s “Can’t Even Tell.” There was a sense of hopelessness and angst, particularly among youth, simmering at the fore of these movies that spilled out onto their soundtracks. Naturally, audiences clung to each track.

“There was this rediscovery of youth culture,” Hite explained. “So, you had new wave, punk, heavy metal — and all of these were marketable items. Movies like ‘Singles’ were dedicated directly to that phenomenon in capturing that moment in time.”

Somewhere in the middle of all this, Lisa Loeb’s “Stay (I Missed You)” and Lenny Kravitz’s “Spinning Around Over You” off the “Reality Bites” soundtrack delivered sweet-yet-melancholic melodies that did wonders for the film and provided a heartbeat for that moment.

But as we approached the end of the decade, hip-hop had begun to pervade white America. Some of the same young people who were into the “Clerks” soundtrack also picked up a copy of the “Men in Black” CD featuring Smith’s title track and “Same Ol’ Thing” by A Tribe Called Quest.

That yielded something closer to “Clueless,” which used Coolio’s “Rollin’ With My Homies” and gave it a whole new context when sparks (sorta) fly between two teenage characters.

Yet despite featuring a plethora of Black music on its soundtrack, there are barely any Black faces in “Can’t Hardly Wait.” While it’s more subtle than, say, “Dangerous Minds” and its soundtrack a few years earlier, the admittedly good “Can’t Hardly Wait” album reflects a false proximity to hip-hop that remains indicative of young white America.

Williams sees some nuance in this trend. “If you got into hip hop after 1995, you got into something that was very mainstream, that was very centered in just pop culture in general,” he said. “By that point, rappers had TV shows and movies and you were seeing references in ‘Clueless.’”

True. Great soundtracks across genres were as ubiquitous as they were accessible throughout the ’90s. So why did it come to an abrupt stop after that? Consumers who largely contributed to their success turned to digital music platforms like Napster, which allowed them to painstakingly select tracks and create their own playlists that eventually took the place of film soundtracks and other albums.

And that decline in demand naturally led to a decline in interest and money to even produce a high-caliber soundtrack. “Now what you see is that one big closing credit song will be by Beyoncé or something and they’ll hype that,” Williams said. “But you don’t really see the whole soundtrack becoming a phenomenon like it did back then.”

It kinda makes you want to pull out your old “Love Jones” or “Titanic” CD and blast it at high volume, doesn’t it? What a time.

After The 1992 L.A. Uprising, Black Comedy Was As Provocative As It Was Disappointing

Sha’Carri Richardson Records Verbal Altercation With Flight Attendant Before Removal From American Airlines Flight
Former NFL Player Jessie Lemonier Dies At 25, Was Expecting His First Child With Girlfriend
New Orleans Mayor Speaks Out After Being Accused Of Having An Affair With Police Officer
Todrick Hall Called Out For Speculating On Stephen ‘tWitch’ Boss’ Death In The Media
Italy Rugby Player Suspended For Giving Rotten Banana To Black Teammate