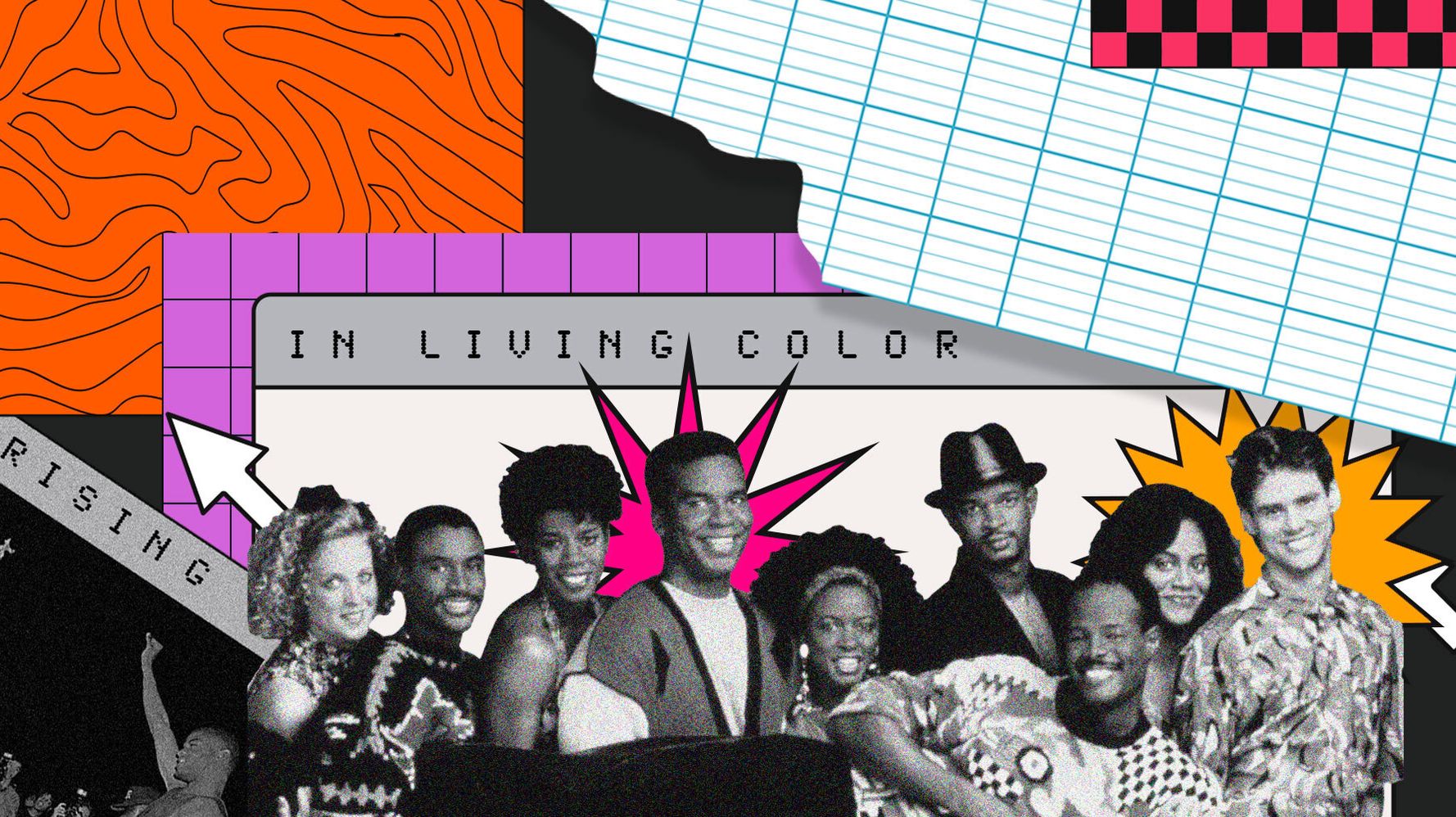 In 1992 ― just four months after the cops who beat Rodney King nearly to death were acquitted, and the resulting civil unrest in Los Angeles led to an attack on truck driver Reginald Denny ― “In Living Color” decided to tell a joke about it. But not just a joke. They did a full sketch, a faux-PSA where King (David Alan Grier) and Denny (Jim Carrey) warned people not to get out of their cars. Because, well, you see what happened to them when they did.

It was one of those moments in comedy that was, especially so soon after a series of tragic events, as shocking and uncomfortable as it was irresistibly funny — especially for Black people. “That’s one of those sketches that you laugh at, but you’re laughing at it uncomfortably,” said Mark Anthony Neal, professor of African and African American studies at Duke University. “It’s funny, but you’re also looking around to see who’s watching you laugh at it.”

Right. Because comedy at Black people’s expense ― even from a Black comedian like Grier, on a show like “In Living Color” that was largely by and for Black people ― always walked a fine line. Still, it was an acute and humorous dose of the broader, unspoken reality for the show’s millions of viewers.

“You think about Rodney King,” Neal continued. “There’s a segment of the folks who are like, ‘If your ass wasn’t drunk and speeding…’ which gets doubled down on when he has this press conference and goes, ‘Can we all get along?’ Folks are like, ‘N***a, what?’”

Neal added that Denny’s situation was also ripe for a brazenly funny response: “It’s like, ‘Dude, everybody knows you shouldn’t have got out of the truck. What?’” But that’s part of what made the sketch such a bold marriage of humor and social insight, especially at a time when folks demanded answers in the same space where they sought levity — from Black comedians.

“I think folks found the humor in that because it was such a tragic moment and a moment that no one really actually wanted to have a conversation and grapple with,” Neal said.

But Black and overwhelmingly male comedians ― especially in the early ’90s, when they rose to new heights with platforms like “In Living Color,” “Def Comedy Jam” and “ComicView” ― had almost an air of arrogance to the way they’d tackle the issues of the world around them. They knew people were finally giving them a level of attention that they wouldn’t have given to biased media organizations like the Los Angeles Times at the time.

Regardless of whether some people were uncomfortable with Black comics’ approach at the time, they served a necessary purpose. “We’ve been through the most shit, so we need to laugh the most,” Torry said. He joked: “If it wasn’t for comedy, there’d be a lot of dead white people around.”

Torry’s comments gesture toward a larger point: There is a potency to how Black comedians spoke the truth about what was going on at the time in a way that intimately appealed to Black audiences, regardless of how many other people also showed up to watch.

Neal points to the “raw, undistilled” comedians who discussed the way race really functioned in America ― comedians like Eddie Griffin and the late Paul Mooney, who Neal says was “someone who was never going to be mainstream.”

Griffin’s brutally funny stand-up episode on “HBO Comedy Half-Hour” in 1994 covered everything from law enforcement to the way Black folks are portrayed in the news. “He goes after Clarence Thomas,” Neal said, “and it just resonated in a way for Black audiences in that it clearly wasn’t about making it comfortable for white audiences to understand where he was coming from.”

But as the profiles of more Black comedians rose, Hollywood came calling with colossal paychecks for movies like “Rush Hour” (starring Chris Tucker) and TV series like “Martin” (starring Martin Lawrence) and “Malcolm & Eddie” (starring Griffin and Malcolm-Jamal Warner). And with that came a shift in how comics approached their comedy — sometimes even sacrificing their style altogether for the wider audience.

“I think when the money changed and they recognized that there was real money to be earned, by finding some way to balance in your Black street cred but also to be accessible to white folks, more of those comics decided not to go hardcore,” Neal said.

That’s not to suggest that Black comics began to cater to white audiences, but many who went the Hollywood route found they had to adopt a certain finesse in order to stay on screen. Torry has certainly seen this happen throughout his career.

“That’s why these entertainers should never forget the Black fan base,” Torry said. He gave credit to the Black clubs and other spaces like Phat Tuesdays that propelled the careers of people like Tiffany Haddish and Dave Chappelle. “Some forget these hood rooms that they came through, the people who supported them.”

Torry, for his part, vowed never to fall into that trap himself. “You can get lost being in Hollywood and playing these mainstream clubs,” he said. “The hood rooms — that’s where you earn your stripes. Even Roseanne Barr went back and did the Apollo. Because she said, ‘Black audiences are honest, and I want to know if I’m really funny.’”

But some of the comedians who did find mainstream success were able to maintain a level of consciousness that ultimately influenced, for instance, how race was explored on a range of sitcoms with Black lead characters. Even so, that came with some concessions.

Consider the “very special episode” trend, which gave us the installment of “The Fresh Prince of Bel-Air” where Will (Will Smith) and Carlton (Alfonso Ribeiro) are wrongly pulled over by white cops. Or the “Family Matters” episode where white cops stop Eddie (Darius McCrary) for being Black in a white neighborhood, and his dad (Reginald VelJohnson) sets the officers straight.

These were usually isolated episodes, written ― mostly by white people ― to appease Black audiences without diligently engaging with them. Neal says it was already an upward battle to write Black characters who didn’t fall into stereotypes or, even more delicately, didn’t adhere to the respectability politics that some Black audiences desired. This was often an awkward compromise.

“I think for folks, until there was a Black writers room and Black producers, that was always going to be a challenge,” Neal said. “Because the larger war for them is not telling a story of social justice. It’s not having Black people who are on TV every week looking like buffoons.”

Even a series like “A Different World” ― which was usually brilliant at blending an element of social justice into its episodes, and which had Black writers like Susan Fales-Hill in the room ― fumbled a storyline that attempted to reckon with the L.A. uprising, and featured Gilbert Gottfried as a racist cop. “It’s such an awful episode,” Neal said plainly.

It perhaps wouldn’t have mattered either way, because in the aftermath of the L.A. unrest, a substantial number of viewers were tuned in to the series finale of “The Cosby Show.” It was an iconic series helmed by a former stand-up comedian, and it was certainly conscious of race. But it never mentioned the uprising in a storyline ― and many Black audiences preferred it that way.

“The biggest metaphor for the generational shift in Black comedy in the early 1990s is that literally as these street insurrections are being waged, most people in America are sitting at home watching the last episode of ‘The Cosby Show,’” Neal said.

The local NBC affiliate in L.A. actually cut away from news footage of the uprising to broadcast the “Cosby Show” finale. Bill Cosby, who was reportedly fielding multiple requests for interviews to discuss the unrest in Los Angeles, recorded a “thoughts and prayers”-like video statement that appeared at the end of the episode.

“Not that Cosby would ever have commented on what happened in L.A., but he literally couldn’t comment on it,” Neal said. “His show was not equipped to comment on what was happening in that moment.”

Truthfully, many shows weren’t. And those that did were often criticized, like “South Central,” which lasted one season. Even “In Living Color,” which was consistently uncompromising, bold and wildly popular, ultimately got into a battle with its parent network Fox, as well as white America, because it got too real. It premiered in 1990 and was off the air by 1994.

Neal compares it to Richard Pryor’s “ill-fated” 1977 series “The Richard Pryor Show,” which lasted just four episodes. “The idea of a Richard Pryor show or an ‘In Living Color’ is attractive to folks,” he explained. “But when it comes to presenting Pryor’s or the Wayans’ and ensemble’s vision, even Fox was uncomfortable with that. Because they thought that white America wasn’t ready for that kind of comedy.”

It’s a shame, because when Black comedians and sitcoms had the space to really be bold and authentic about the kind of consciousness that came naturally to them, they were unforgettable. At a time when hip-hop was bursting through the noise with anthems that spoke to Black America, comedy in the ’90s found itself in a precarious state when it tried to do the same.

“We weren’t ready for that,” Neal said. “We were ready to hear Public Enemy talk about ‘Fight the Power’ in a song. We weren’t necessarily ready to actually fight the power.”

As it turned out, gems like Mooney’s work and “In Living Color” were, as Neal put it, “lightning in a bottle.”