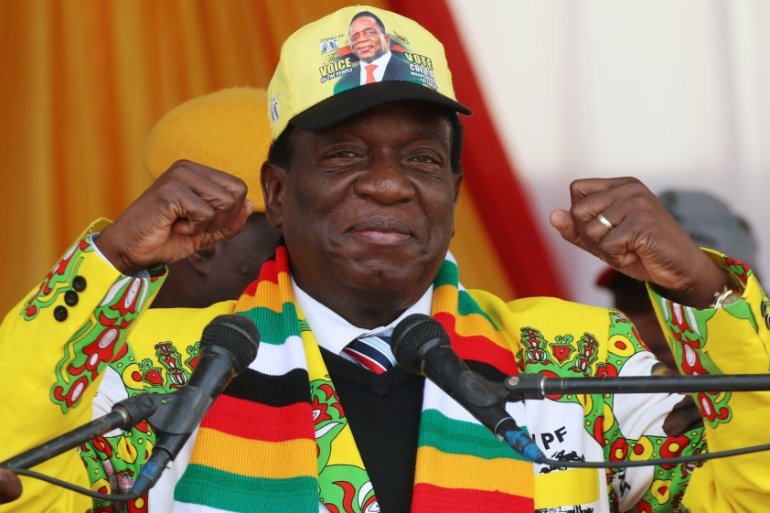 In 1962, Mnangagwa joined the Zimbabwe African People’s Organization (ZAPO) which was fighting for independence for British Southern Rhodesia. In 1963, he was sent to China and Egypt where he received military training. He then returned to Southern Rhodesia to fight for independence. In 1965, he was arrested and convicted for allegedly blowing up a train near Masvingo and spent the next ten years in prison. He lost hearing in one ear as a result of being tortured in prison. He was given the nickname “Ngwena” (crocodile) by his fellow freedom fighters and inmates as he “moved slowly and quietly before attacking.” 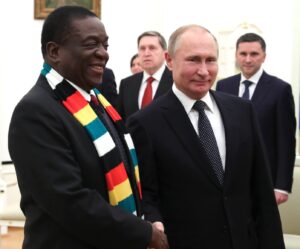 After being released from prison Mnangagwa moved swiftly up the ranks of what was now the Zimbabwe African People’s Organization-Patriotic Front (ZANU-PF). In 1977, he was appointed head of both the civil and military wings of the organization by party president Robert Mugabe. After a protracted civil war, Zimbabwe became independent on April 19, 1980. Between 1980 and 1988, Mnangagwa served as Minister of State Security and head of the Central Intelligence Agency for the nation.

Between January 1983 and December 1987, a concerted effort was made by President Mugabe to eliminate opposition to ZANU and his government. The opposition was centered in the province of Matabeland. Organized massacres by the Zimbabwean army’s Fifth Brigade were directed at the Ndebele ethnic group. These killings have been referred to as the Gukurahundi (early rain that washes away the chaff) massacres. It is estimated that over 20,000 people were killed in a 4-year period. Mnangagwa has been accused of helping orchestrate the killings.

President Robert Mugabe, 93, in 2017, had ruled Zimbabwe since independence. His economic and political policies had caused great suffering for much of the population. On November 6, 2017, Mugabe dismissed Mnangagwa from the government and on November 8 he was expelled from ZANU-PF. These moves apparently were to ensure Mugabe’s wife, Grace, would be his heir apparent.

On November 14, 2017, Zimbabwe Defence Forces chief Constantino Chiwenga criticized the sacking of Mnangagwa and sent troops to the outskirts of Harare, the capital. On November 17, Mugabe attended a university graduation ceremony and claimed he was under house arrest. The next day thousands took to the streets demanding Mugabe’s resignation. On November 20, ZANU-PF started impeachment proceedings against Mugabe. The next day ZANU-PF nominated Mnangagwa to replace Mugabe. On November 24, Mnangagwa was inaugurated as president and commander-in-chief of the Zimbabwean military.

Mnangagwa successfully ran for President in 2018 and was inaugurated on July 30, 2018. Mnangagwa has promised job creation and compensation for those who had their land seized by the government in the past. He has also promised fair, democratic elections and financial stability. The reality of Zimbabwe has not matched his rhetoric. Over a million Zimbabweans have fled the country since 2018 and inflation and unemployment continue at extremely high levels. Corruption, nepotism, and intimidation have also continued from the Mugabe era.