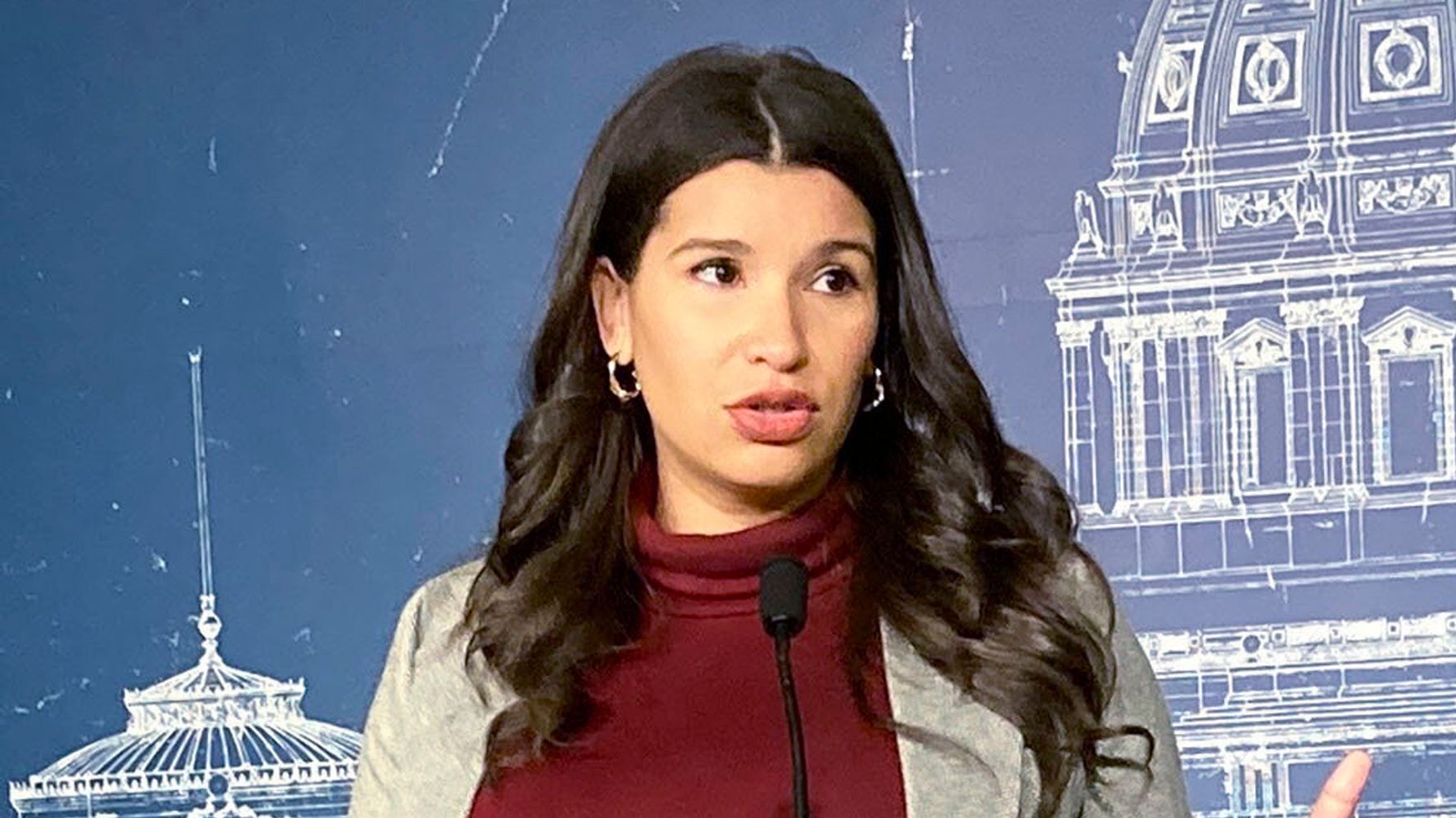 Around 2 in the morning on Saturday, Erin Maye Quade started going into labor.

It was tough timing. This was going to be a big day. In just a few hours, Maye Quade was supposed to pull everything together and give a major speech.

Maye Quade, 36, was running for state Senate, but she first needed to win the endorsement of the Democratic-Farmer-Labor Party to be her party’s nominee.

Mitchell Walstad, Maye Quade’s campaign manager, told HuffPost that they asked convention organizers to move up the timing of the endorsement for their race. They reached an agreement to do so, but only after “pushback,” he said.

“So we didn’t feel as if there was any latitude to ask for any suspension of the endorsement, even though we would’ve preferred to do it at a different date,” Walstad said.

“We went into the day not sure if she was even going to make it to the convention,” Walstad added. “She came and ― we had a little personal campaign room. So she’d go in there to have her contractions. And then she was like, ‘Great, I have 15 or 20 minutes until my next contraction happens. So I’ll go out and talk to delegates during this time trying to push through it.’”

Remarkably, Maye Quade pushed through for hours ― and video of her speech shows just how tough it was. Toward the end of her remarks, Maye Quade had to stop and lean over as she had contractions. The crowd cheered in support.

Watch video of the speech above.

Maye Quade not only gave her speech while in labor, but she stayed for a question and answer session.

“There were points where it was her turn to answer, and they had to switch the order and have the other candidate answer because she could not speak because she was having a contraction in front of everyone,” Walstad said.

“I think that they would’ve stopped this convention for any other medical emergency, but instead they put a Black woman through immense pain …”

Maye Quade lasted through the first round of ballots, where delegates vote on who will be the nominee for the DFL (Minnesota’s version of the Democratic Party). Her opponent, Justin Emmerich, received the most votes that round ― although not with enough to win outright ― but Maye Quade decided that she needed to go to the hospital and couldn’t do the one-on-one work needed ― personal conversations to persuade delegates to come to her side ― to succeed in the second round. So she withdrew from contention.

Walstad confirmed that they never explicitly asked for the convention to stop because Maye Quade had to leave. According to local TV station Fox 9, a motion to suspend the proceedings would have required two-thirds of the delegates to approve.

Maye Quade supporters said they were disappointed that the convention leadership didn’t act on its own.

Walstad said he believed that if someone was having a different medical emergency, such as a heart attack, the balloting would have been stopped.

“She was actively going to not be able to stand up anymore because she’s giving birth and went to the hospital. And there was no such accommodation in the way that there would’ve been if someone had a different hypothetical emergency,” Walstad said.

“I think that they would’ve stopped this convention for any other medical emergency, but instead they put a Black woman through immense pain and put her in front of the room during one of her most vulnerable moments in life ― in front of a room of 200 people,” added Emma McBride, political director of Women Winning, who works with Maye Quade’s wife and was a campaign surrogate. “I just felt really disappointed that nobody in the room who had the power to do so was putting a stop to this.”

Maye Quade served in the state House from 2017 to 2019, just the third Black woman to serve in the chamber. In 2018, she ran as the DFL-endorsed candidate for lieutenant governor, becoming the first LGBTQ person endorsed on the ticket of a major political party in Minnesota. (She lost in the primary.)

Minnesota has never had a Black woman in the state Senate.

In 2017, Maye Quade became one of the most visible faces of the MeToo movement in Minnesota, when she and other women accused a state senator of sexual harassment.

After Maye Quade went to the hospital, Emmerich ran unopposed and won the DFL nomination. He tweeted about his victory on Saturday.

INCREDIBLY EXCITED to announce I won the @MinnesotaDFL Endorsement on the 2nd ballot with 71% of the vote!!! We are going to work hard till the election to keep this seat blue and #flipthesenate
Thank you to all my supporters!

Emmerich did not return a request for comment, but he told Fox 9 after the convention: “I’m just focused on running the race and winning in November. At the end of the day, we want to make sure that we keep the seat in DFL hands.”

Clare Oumou Verbeten, a DFL-endorsed candidate running for state Senate, offered her support for Maye Quade in a Facebook post on Sunday morning.

“It hurts me to see this very public display of a Black woman pushing through pain, especially when the blatant disregard and dismissal of our pain has led to alarming rates of us dying during childbirth,” she wrote.

Both McBride and the Maye Quade campaign said they didn’t fault any single person for what happened Saturday. But they were disappointed that there wasn’t a process to properly respond.

“Watching what happened, and watching a DFL process fail yet again another woman, another woman of color, and put somebody through something so difficult as that just reaffirms why we do what we do. We need pro-choice women in all places where decisions are being made,” McBride said.

Maye Quade successfully delivered a baby girl around 2 a.m. on Sunday. Both the mother and daughter are doing well.

How Technology Alters The Fight For Reparative Justice
Why Juneteenth Food Traditions Include Hot Links, Red Drinks and Dishes
Barack And Michelle Obama Celebrate Daughter Malia On 24th Birthday With Adorable Childhood Photos
How A Viral TikTok Is Sparking Conversation Around Urban Food Deserts And Inequality
Democrats Want Biden To Be More Aggressive On Abortion Rights