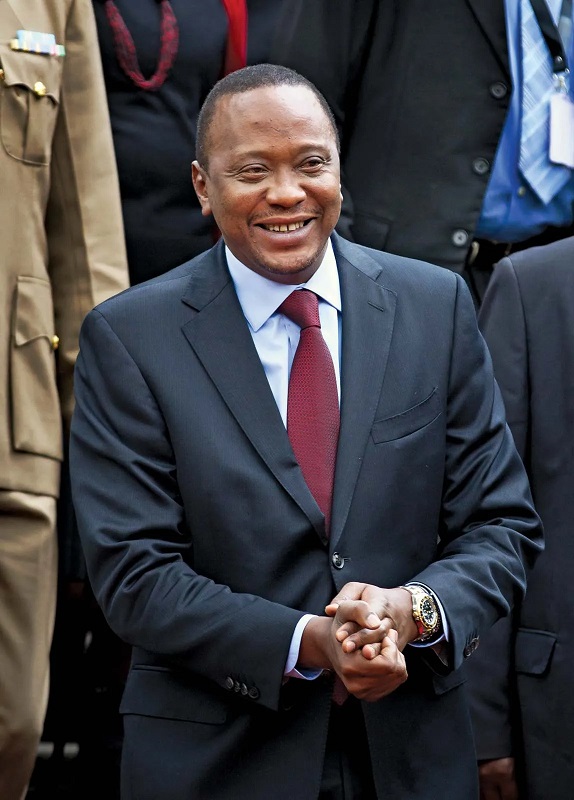 Uhuru Muigai Kenyatta is the current President of Kenya. He was born on October 26, 1961 in Nairobi the son of Kenya’s first president, Jomo Kenyatta, and his fourth wife, Mama Ngina Muhoho. As a youth he attended Loreto Covent school and St. Mary’s School in Nairobi. He also attended Amherst College in the United States graduating in 1985 with a degree in political science and government. Kenyetta then returned to Kenya and started the Wilham Kenya Limited company which exported agricultural produce. He sold the company ten years later.

In the 1990s Kenyatta became active in the KANU (Kenya African National Union) political party. He ran for the national parliament in 1997 but lost. Kenyan President Moi encouraged and supported Kenyatta’s participation in politics. In 1991 Moi appointed him to chair the Kenya Tourism Board. In October, 2001 he was appointed to parliament to fill an empty seat. Two months later Moi made him Minister for Local government in the national cabinet.

In 2001 Kenyetta was elected first Vice-Chairman of KANU and in December 2002 with Moi’s support, Kenyatta was selected as KANU’s presidential candidate. At the general elections Uhuru Kenyatta garnered 31% of the vote and came second to Mwai Kibaki. He took up the role of the leader of Official Opposition in Kenya in 2003.

The 2007 presidential election was marred by widespread violence, voter intimidation, and irregularities. This resulted in the formation of a coalition government. Kibaki retained the presidency and appointed Kenyatta as Deputy Prime Minister. In 2009 he was also appointed Minister of Finance.

In 2012 Kenyatta left KANU and formed a new political party, The National Alliance. The following year, 2013 The National Alliance joined other parties in the “Jubilee Alliance” to contest the Presidential election. Kenyatta was selected as the alliance’s presidential candidate. He won the election on March 4, 2013 and on April 9, 2013 Kenyatta was sworn in as the fourth president of Kenya.

Kenyatta ran for his second-term in 2017. The election was held on August 8, 2017 and afterwards clashes broke out between Kenyatta’s supporters and opponents leaving 50 people dead. The opposition, citing voting irregularities, appealed to the Supreme Court to annul the presidential election. On September 1 the Supreme Court nullified the election and said a new presidential election must be held. The second election held on October 26th was boycotted by the opposition and Kenyatta secured a victory. He was sworn in for a second and final term on November 28, 2017.

During his tenure Kenyatta has expanded the rail network and a large geothermal plant has been constructed. He has made maternal health care free in all public health facilities. He has had to contend with terrorist attacks by the Al-Shabbab network based in neighboring Somalia. He has also had to contend with charges of government and ministerial corruption within his government.

In 1991 Kenyatta married Margaret Gakuo. They have three children: Jomo, Jaba and Ngina.

Details Revealed On How Chadwick Boseman’s Estate Will Be Distributed
Actor Kimberly Elise Sparks Outrage On Twitter For Celebrating End Of Roe V. Wade
Samuel Jackson Rips ‘Uncle Clarence’ Thomas For Risking Interracial Marriage In Roe Reversal
Where Can You Catch Nathalie Emmanuel In 2022?
‘It Can Kill Us’: Protester On The Dire Cost Of Forced Birth For People With Disabilities