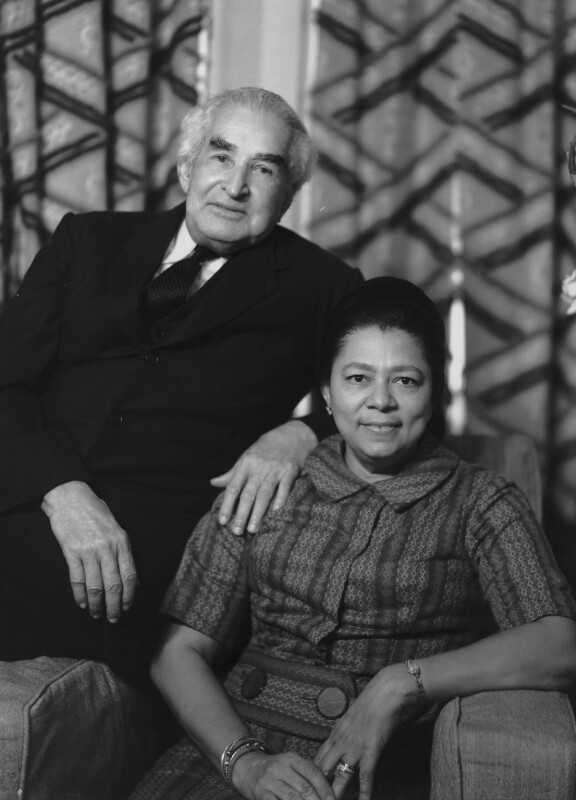 Sir William Alexander Bustamante ONH GBE PC was a Jamaican politician and trade union leader who became the first Prime Minister of Jamaica in 1962. He was born William Alexander Clarke on February 24, 1884 to Mary Clarke and Robert Constantine Clarke.

Bustamante attended primary schools in Hanover, Jamaica. As a young man he traveled extensively and returned to Jamaica in 1932 and began to lead the struggle against colonial rule. He began to make his presence felt in Jamaica when the country was still a crown colony. Under this system, the British-appointed governor had the power of veto, which he very often exercised against the will of the majority. Bustamante quickly realized that the social and economic ills that such a system entailed had to be fought through the mobilization of the working class.

In 1937 Bustamante was elected treasurer of the Jamaica Workers’ Union (JWU), which had been founded by labour activist Allan G.S. Coombs. During the 1938 workers’ uprising, he quickly became a spokesman for the striking workers, who were largely of African and mixed-race descent. The JWU became the Industrial Trade Union (BITU) after the uprising with Bustamante as its leader.

On September 8, 1940, Bustamante was imprisoned at Up Park Camp for allegedly violating the Defence of the Realm Act and was released seventeen months later. In 1943, he founded the Jamaica Labour Party (JLP) and became its first chairman. The first general election under universal adult suffrage was held in 1944 and the JLP won 22 of the 32 seats in the first House of Representatives, making him the unofficial leader of the party and Minister of Communications until the post of Chief Minister was created in 1953. He held this post until the defeat of the JLP in 1955. He had also been Mayor of Kingston from 1947 to 1948.

Although originally a supporter of the Federation of the West Indies, Bustamante gradually became an opponent of the Union in the 1950s. He called for Jamaica’s independence from Britain and declared that the JLP would not contest a federal parliamentary by-election. His rival and cousin, Prime Minister Norman Manley, called a referendum on the issue in 1961. Jamaicans voted for the country’s withdrawal from the federation.

After Jamaica gained independence in 1962, Bustamante became Jamaica’s first prime minister and served until 1967. That year he retired from active participation in public life and actual power was assumed by his deputy Donald Sangster.

Bustamante was decorated for his public service in Jamaica in 1955. In 1963, he received an honorary doctorate from Fairfield University in Fairfield, Connecticut. In 1964 he became a member of the Privy Council of the United Kingdom (PC). In 1966, he was awarded an honorary doctorate by the University of the West Indies. In the same year, he was awarded the Special Grand Cordon of the Order of Brilliant Star by the Republic of China. On June 9, 1967, Bustamante was made a Knight of the Grand Cross of the Order of the British Empire (GBE).

Sir Alexander Bustamante was married four times. He died on August 6, 1977 at the age of 93 and was buried in the National Heroes Park in Kingston. Sir Alexander married his last wife, Gladys Longbridge on September 17, 1962 with whom he had no children.