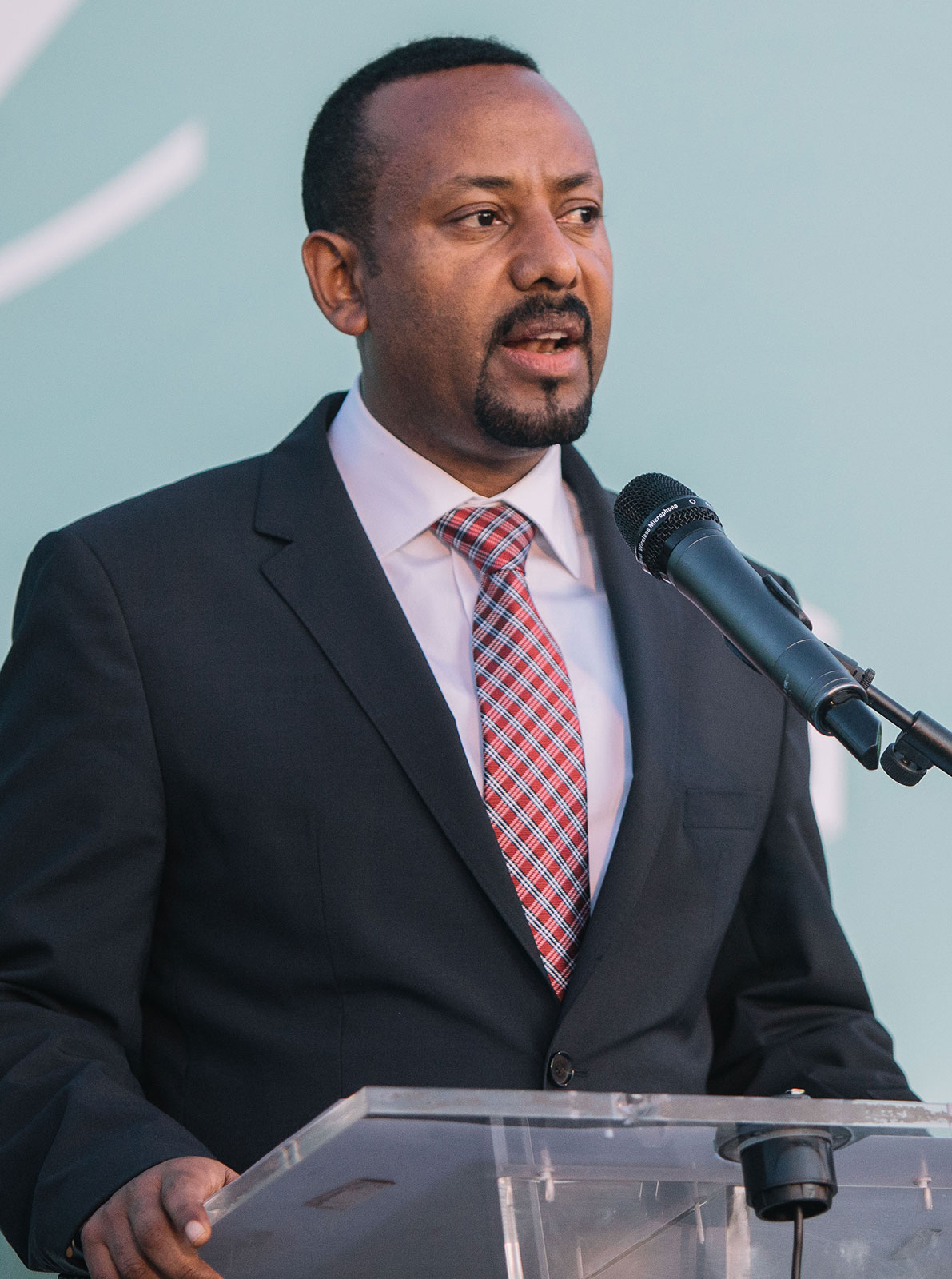 The current Prime Minister of Ethiopia, Abiy Ahmed, was born on August 15, 1976 at Beshasha, Ethiopia. His father, Ahmed Ali, was a Muslim and his mother, Tezeta Wolde, a Christian. As a child he attended primary school in Beshasha and secondary school in nearby Agaro. As a teen in 1990 he joined the rebels fighting the Derg regime then controlling Ethiopia.

After the Derg was overthrown in 1987 Abiy joined the Ethiopian National Defense Forces and rose in the ranks to Lieutenant Colonel. He served as a peace keeping officer for the United Nations in Rwanda from 1995 to 1997. When he returned to Ethiopia in1998, he continued his education, earning a Bachelor’s degree in Computer Engineering.

In 2007 Ahmed was made head of the Information Network Security Agency which is responsible for government cybersecurity. In 2010 he was elected to the House of Peoples’ Representatives, the national legislature, to represent his home region. In 2011 he was awarded a Master’s Degree in Transformational Leadership and earned a second Master’s in 2013. In 2017 he was awarded a Ph.D. from Addis Ababa University.

In 2016 Ahmed was appointed to the position of Minister of Science and Technology in the Ethiopian government. In February of 2018 when Prime Minister Hailemariam Desalegn resigned, Ahmed was elected Prime Minister by the House of Peoples’ Representatives in April 2018. He was the first member of the Oromo ethnic group (the largest ethnic group in Ethiopia) to hold the position.

At the age of 42 of Prime Minister Ahmed embarked on radical changes in Ethiopia. Many people arrested for political reasons by the former regime were freed. He invited opposition figures in exile to return and encouraged foreign investment to boost economic growth. The first woman president, Sahle-Work Zewde, was appointed and Ahmed’s cabinet was gender balanced. He lifted restrictions on the media; encouraging a freer press and fostered national unity while celebrating the diversity of Ethiopia’s many ethnic, linguistic, cultural and religious groups.

In 2018 Ahmed ended the 20-year war with neighboring Eritrea when he accepted the results of a border mediation recommendation, and met with the President of Eritrea, Isaias Afwerki. On July 9, 2018 the two countries announced that the state of war between them had ended and as a result Ahmed was awarded the Nobel Peace prize in 2019 for his efforts at peace building.

Ahmed’s national policies did not always have the intended effect. In some areas ethnic tensions were exacerbated and there were political tensions within the ruling party. In 2019 when he attempted to reshape the Ethiopian People’s Revolutionary Democratic Front into a new political party; the Prosperity Party, some groups resisted. The Tigray People’s Liberation Front, which controlled Tigray province, resisted Ahmed’s efforts resulting in armed conflict beginning in November, 2020. The conflict continues to this day with thousands killed and many more displaced or contending with famine on both sides of the conflict.

Abiy Ahmed, 46, is married to a noted Ethiopian gospel singer, Zinash Tayachew. They are Pentecostal Christians and have three daughters and one son.